In the very popular computer magazine that features case mods; CPU Magazine has a full two page spread that highlights the NVIDIA ION Case Modding Contest that we are hosting here at Modders-Inc. The articles introduces the Pro Modders that are making the ION case mods and list the top five ideas that were suggested by the public for them to build. Check the article by clicking on the image. 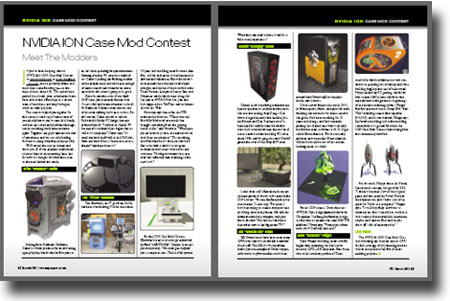 Click on the image to read the .pdf file

After having over 450 case modidea submitted in the event, Modders-Inc picked the top 30 and from those the Pro Modders themselves picked the mod that they would like to create. Right now they are working hard on the mods to complete them withing 60 days. So jump into the forums and see who made the top 30 and which 5 case mods were hand picked to be made.

Check out the next issue of Computer Power User Magazine (CPU) as they will be highlighting the case modders and the case mods they picked.

Top #1 idea will win the PC they dreamed up that was created by the Pro Modder!