A Closer Look at the Z390 Aorus Xtreme Waterforce 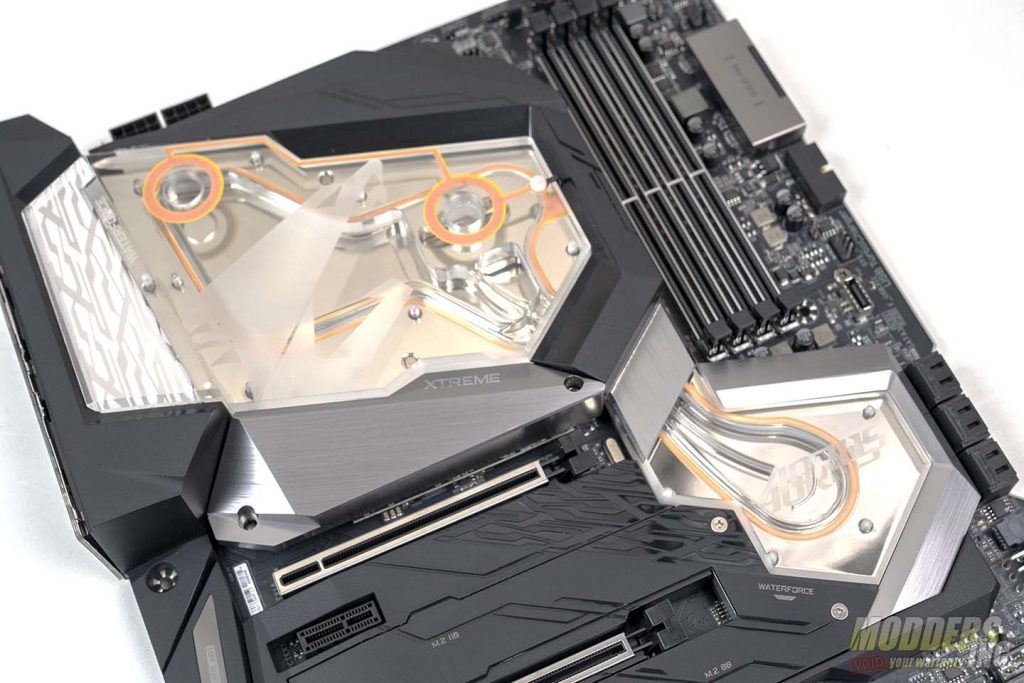 The Z390 Aorus Xtreme Waterforce is an EATX motherboard and has as many features packed onto a motherboard that I’ve personally ever seen. The Z390 Aorus Xtreme comes in two flavors. First is the standard edition with all components passively cooled with heat sinks. The second version and the one we’ll be featuring in this review is the Waterforce Edition that comes packed with an All-In-One Monoblock to water cool the entire motherboard.

The Z390 Aorus Xtreme Waterforce has the same LGA 1151 socket that Intel has been using on their consumer motherboards since they 6th generation of Core Processors. However, the Z390 chipset only supports 8th and 9th generation Core Processors. So, your I7 7700k unfortunately will not work in the board. 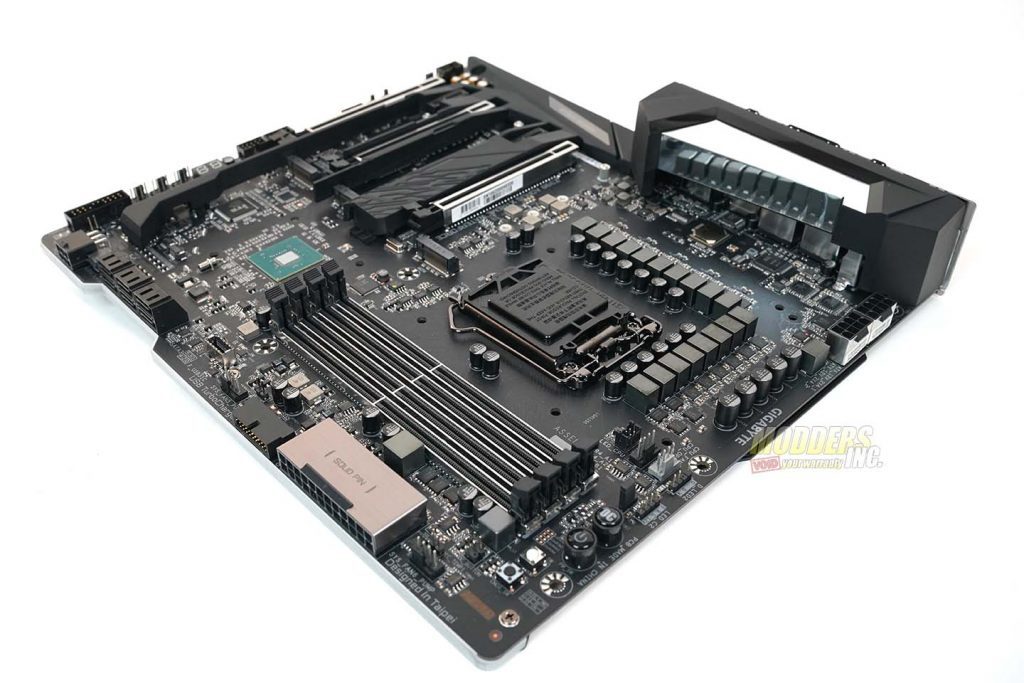 The Z390 Aorus Xtreme Waterforce has two 8-pin power connectors with metal shielding to deliver plenty of power to the motherboard and it’s most power-hungry components.  The Z390 Aorus Xtreme features an IR Digital PWM Controller. Each of the 16 PowIRstage Mosfets is capable of providing up to 60A of power from each phase. Providing a total of 960A of total power to the CPU. This much power will allow you to get the most performance possible out of your CPU.

Internally, the Z390 Aorus Xtreme is packed with connectivity. It has the basics that an EATX motherboard would have such as a 24-pin connector and not one, but two 8-pin power connectors.  Both the 24-pin and both 8-pins feature Gigabytes Solid Pin Power connectors. Unlike traditional pin connectors, the pins on the Z390 Aorus Xtreme Waterforce have a larger contact area and are more durable. Also, having more quality metal will allow the connectors to sustain higher levels of power and the heat that it generates. Directly next to the 24-pin connector is a front panel USB 3.0 header.

The Z390 Aorus Xtreme has a total of 16 hybrid fan headers that allow you to power anything from pumps to system fans. There are also two temperature sensor headers, two addressable LED headers, and two RGB LED headers for RGB strips.

Next to the 24-pin connector are both front USB 3.0 and USB 3.1 headers. Continuing down the right side of the motherboard, next we find six SATA 6 Gb.s connectors and the swappable BIOS chip. The Z390 Aorus Xtreme is a dual bios motherboard. However, in the rare situation that both BIOS are corrupted, you can contact Gigabyte and get a new BIOS chip.

Right next to the bios chips is a 6-pin PCIe connector. This is designed as auxiliary power for the PCIe X16 slots. Its recommended this be used when you have two or more graphics cards installed. Continuing along the bottom of the motherboard, on the right corner is the front panel headers for the power and reset and speaker. Nest to the front panel headers are three system fan headers and the debug display that will display post code errors.

The Z390 Aorus Xtreme has two USB 2.0 headers centered along the bottom of the board. The next port is labeled OCT_CON. This connection is for the Gigabyte add in the GC-OC Touch panel.  The GC-OC Touch panel is a small add-in that allows you to overclock the processor at the touch of a button. There is a proprietary cable packed with the motherboard to connect the GC-OC Touch panel top the motherboard. This is a feature more for enthusiasts. But then, this is also an enthusiast motherboard.  Next, you’ll find a TMP, or Trusted Platform Module header. A TMP chip is an add-in chip that provides various securities for your computer. A TMP chip can store things such as passwords and encryptions. Still going along the bottom of the board, there is a BIOS_SW switch and an SB switch, like on the GC-OC Touch panel. The SB switch will allow you to go into single bios mode. The BIOS_SW switch will allow you to switch to the operational BIOS if one is corrupted. There are both an RGB Strip header and an addressable LED header along the bottom, followed by the front panel HD Audio header.

The GC-OC Touch panel has several headers, switches, and buttons. For starters, there are six fan headers on the GC-OC touch panel.  These six fan headers are powered by a 4-pin Molex connector on the left of the panel. Next, there are three small buttons. The first is the CLEAR_BAT button. This button does the same thing as removing the battery on the motherboard. Next is the CLEAR_CMOS button that does just that, it clears the CMOS. The last of the three small buttons is the RESET button that resets the system.

Next to the reset button it the first large button. This is the power button that will power on the system. Just below the fan headers are five more large buttons. In order from left to right, they are BCLK-, BCLK+, GEAR, RATIO- and RATIO+. The BLCK- reduces the base clock of the CPU and the BLCK+ increases the base clock of the CPU. The GEAR button is a toggle switch and changes the BLCK stepping to either 0.1 MHz or 1 MHz. The RATIO- button reduces the CPU ratio and the RATIO+ button increases the CPU ratio.

To the far right of the GC-OC Touch, panel are three switches. There are the SB switch, the IGPU switch, and the TGR switch. The SB switch switches between single and dual BIOS. The IGPU Switch enables or disables the IGPU on the Processor. The TGR switch toggles between the target CPU frequency set in the BIOS and the “Safe Frequency” which is the lowest frequency the CPU can run at. The last this on the GC-OC Touch Panel is onboard voltage measurement modules. There are 13 of these modules. They are used to test various voltages on your motherboard using a multimeter. The GC-OC Panel isn’t something even the most hardcore enthusiast will use all the time. However, for those who are really into extreme overclocking, this is a great addition to the Z390 Aorus Xtreme Waterforce motherboard.

Now we get into the on board audio on the Z390 Aorus Xtreme Waterforce. In the past several generations, on-board audio has come a long way. The 127dB SNR AMP-UP Audio with High-End ESS SABRE 9018K2M DAC on the Z390 Aorus Extreme is proof of that.  The Realtek ALC1220-VB codec offers true hi-fidelity surround sound audio and enabled DSD music playback. DSD stands for Direct Stream Digital. This is a method of converting analog sound to digital. 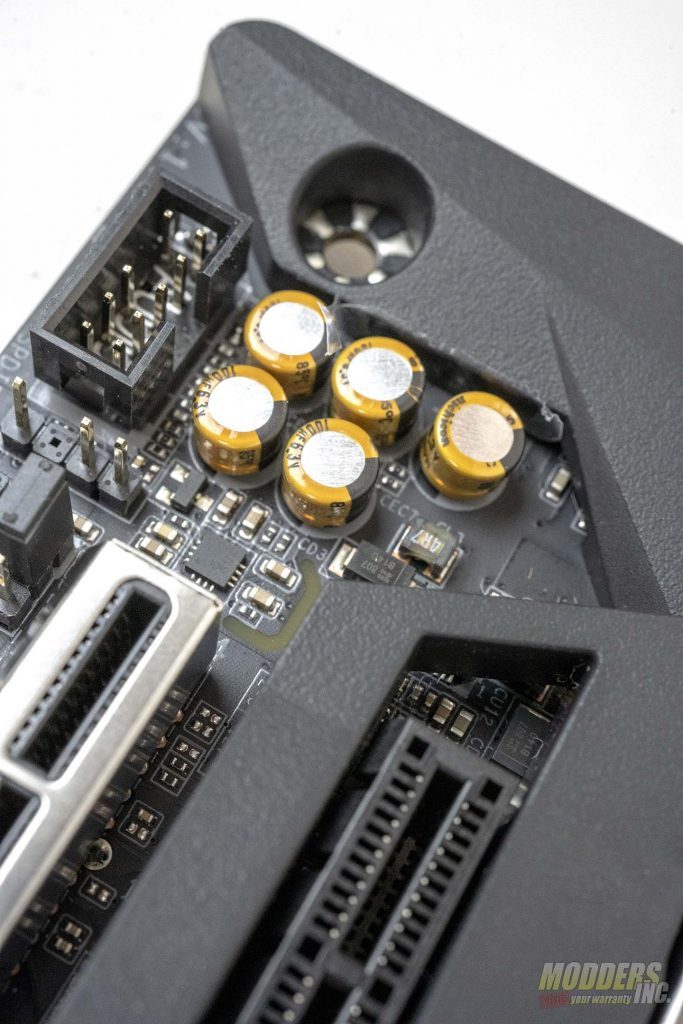 The 32-bit, 192KHz ESS Sabre reference DAC offers a dynamic range (DNR) of 127dB (decibels) and the world’s best total harmonic distortion plus noise (THD+N) of -120dB. Both the left and right channels are processed separately for maximum stereo sound quality and the high-quality signal strength. 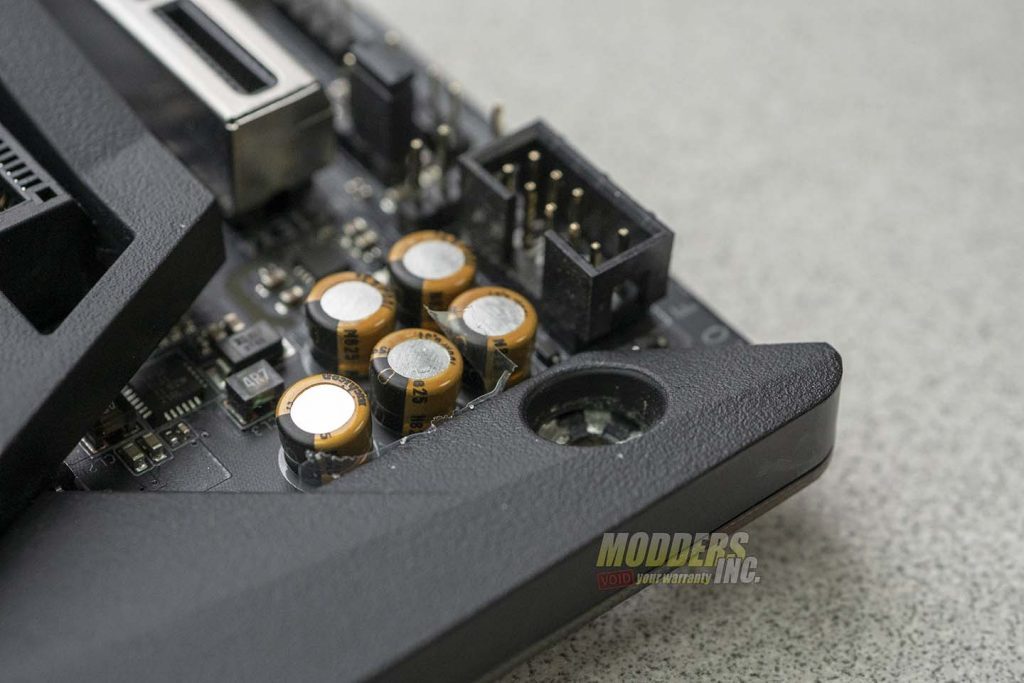 The Z390 Aorus Xtreme also uses the TXC Oscillator to provide precise times for the digital-analog converters. The board also uses auto impedance sensing. This allows the Z390 Aorus Xtreme to automatically adjust the proper power output to your headphones 6 to 600 Ω. This makes sure your headphones are properly powered and cuts back on distortion. 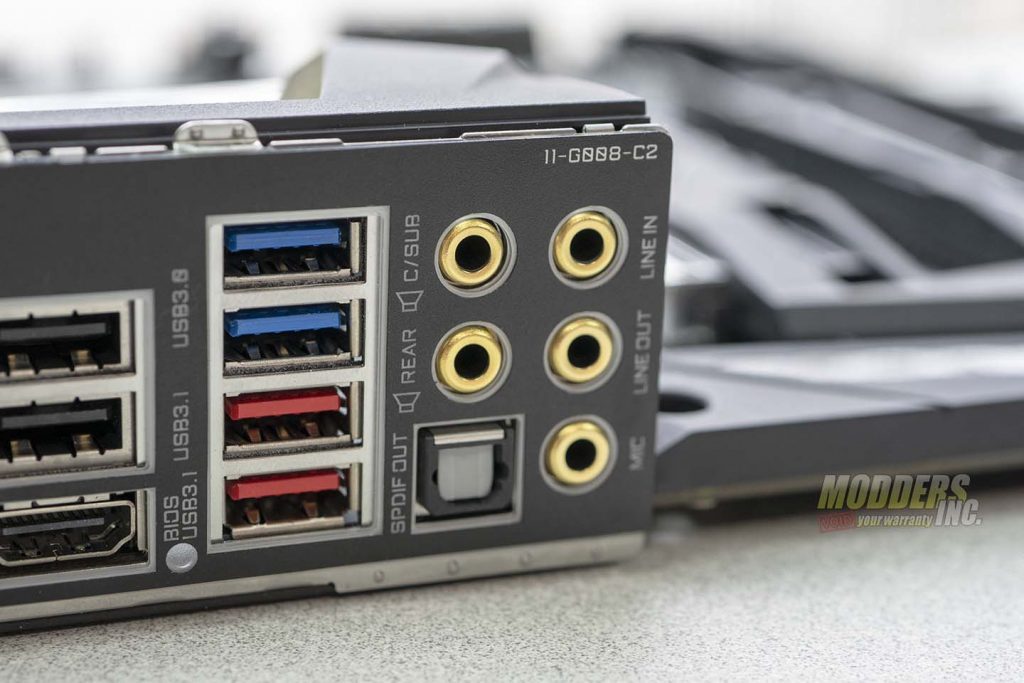 The LME49720 from Texas Instruments featured on the Z390 Aorus Xtreme is a high-performance dual op-amp drives clean analog power for audio components to ensure minimal noise. TI TPS series Regulator is a low voltage, linear regulator that provides undisturbed power to the digital-analog converters. Basically, the Z390 Aorus Extreme has a high-end sound card built right on the motherboard

The Z390 Aorus Xtreme has what Gigabyte is calling “Next Generation Connectivity.” Where the Z390 Aorus Xtreme Waterforce is a large investment, it’s also something you’d want to keep around for quite a while. So, Gigabyte did its best to “future proof” this motherboard to allow you to do just that. 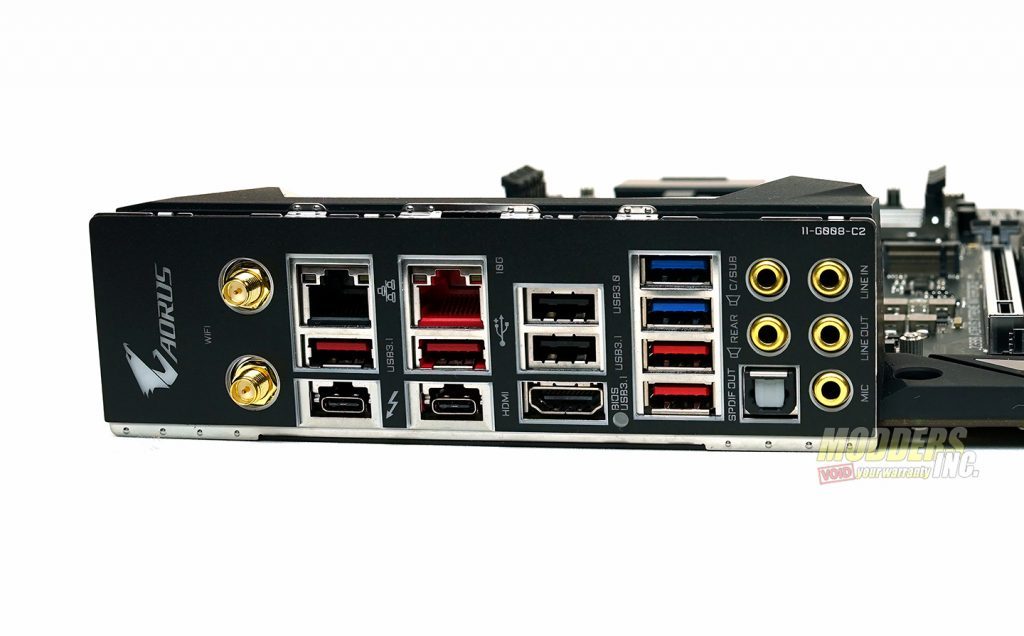 The rear I/O consists of dual LAN ports/ The first being an Intel GbE LAN and the second an Aquantia 10GbE LAN. There are two USC Type-C ports with USB 3.1 Gen 2 support and Intel Thunderbolt 3 support which has transfer speeds of up to 40 Gb/s. There are also eight USB ports that two are USB 2.0, two are USB 3.1 gen 1 (3.0) and four are USB 3.1 gen 2. One of the USB ports on the rear I/O doubles as a Q-Flash Plus port.  This allows you to update the BIOS from a thumb drive without the need for a CPU or memory installed. Just plug in the flash drive with the update BIOS and if done correctly, an LED will notify you of success.

For wireless connectivity, the Z390 Aorus Xtreme is sporting an Intel CNVi interface 802.11a/b/g/n/ac, supporting 2.4/5 GHz Dual-Band Gbit WIFI and BLUETOOTH 5. The Z390 Aorus Xtreme Waterforce features Gigabytes all-new Aorus Antenna. It’s essentially two separate antennas that each screw into their own port. This will prevent the cable for the antenna from getting all twisted up when it’s installed. The Z390 Aorus Xtreme also has support for USB Turbocharge. Last, there are 5 3.5 mm jacks with support for 2/4/5.1/7.1-channel surround sound and an S/PDIF Out for an optical cable.

The Z390 Aorus Xtreme has three PCI Express x16 slot. The top slot running at X16, the second slot running at X8 and the third running at X4. However, the second slot shares bandwidth with the top slot. So, when both are populated, they’ll both run at X8. Also, the PCIe X4 slot shares bandwidth with the M2P slot (bottom M.2 slot). When the M2P slot is populated, the PCIe X4 slot runs in X2, as does the M2P slot. There are also two PCIe X1 slots. The PCIe X16 slots are PCIe 3.0 and the X1 slots are PCIe 2.0.

The Z390 Aorus Xtreme Waterforce features Gigabytes Ultra Durable PCIe Armor. This is a single piece, stainless steel shielding that covers the PCIe X16 slots. The PCIe Armor provides extra support for heavy graphics cards to help prevent GPU sag. The PCIe Armor also provides extra anchor points for the PCIe lanes. In testing, the retention force is up to 3.2 times stronger than the average PCIe slot and in shearing tests, up to 1.7 times stronger.

Not only do the PCIe slots have armor, but the DIMM slots do as well. The memory slots are affixed with Gigabytes Ultra Durable Memory Armor. The Memory Armor is a single piece of stainless steel that covers all four DIMMs. It also works as an anti-bending plate/ This helps protect the PCB from bending and distortion when installing the memory. It also protects from possible ESD, or electro-static discharge interference.

The biggest thing that sets the Z390 Aorus Xtreme Waterforce apart from the normal Z390 Aorus Xtreme is the All-In-One Monoblock that comes backed with the motherboard. This is the first time Gigabyte has produced anything like this. The All-In-One Monoblock covers both the CPU and the PCH. It also has three built-in thermal guards for the three M.2 slots on the motherboard. There is a leak detection circuit around the entire monoblock which will automatically trigger a shut down if it detects leaking. The monoblock uses G ¼ threads, so it’s compatible with any fitting you like to use. It has fully addressable RGB lighting, 51 LEDs in total, and is compatible with RGB Fusion 2.0. The monoblock comes with pre-applied thermal paste over the CPU and thermal pads over the Mosfets, Chokes, LAN and PCH. There are also additional thermal pads packed with the monoblock.