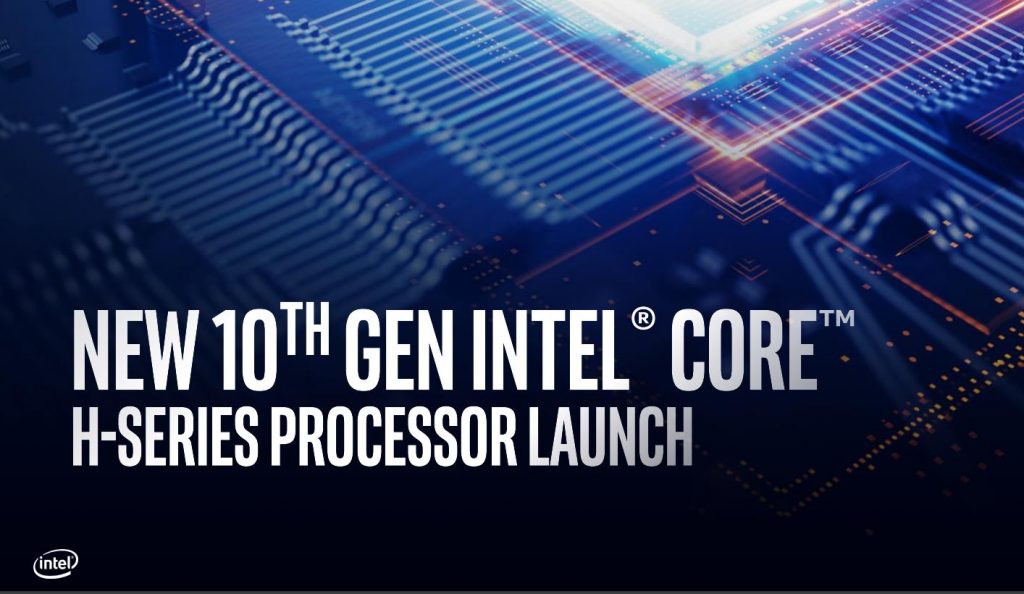 Intel announced its 10th gen H-Series of Core Processors. As a PC enthusiast, I’ve never really considered a laptop for more than just travel.  But as much as I do love my PC, in today’s world, a laptop is essential for many of us who often have to work on the go. However, the biggest downside to using a laptop is having to give up certain benefits that we get from desktop PCs such as unlocked processors that run at high frequencies.  Nothing beat’s having a fully unlocked processor that can run stable at 5 GHz or higher. Well, if what Intel is claiming turns out to be true, we may not have to give up some of the benefits of desktop performance when switching to a laptop. 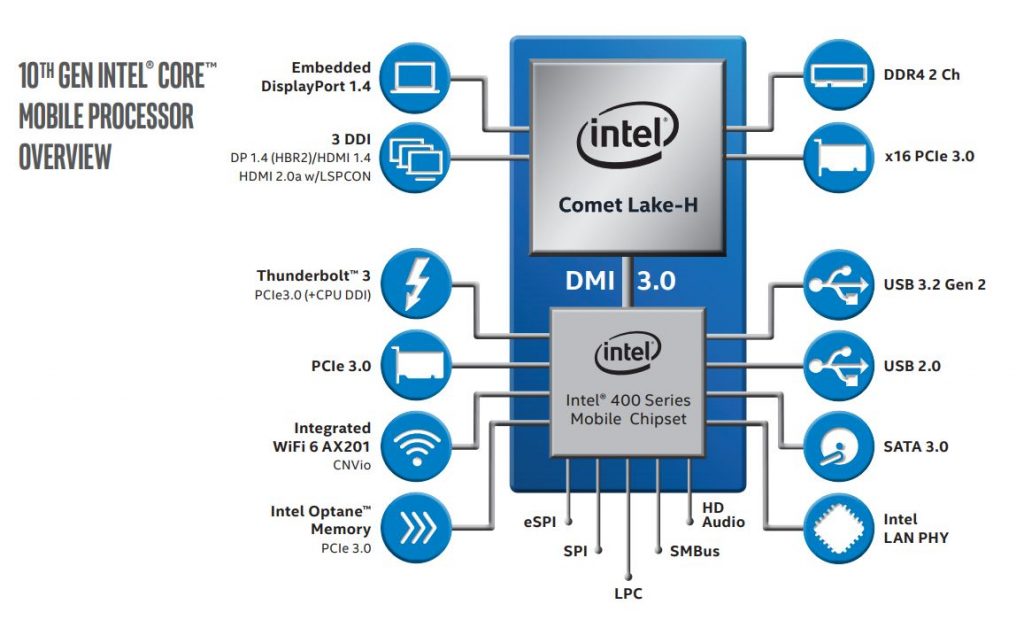 ▪ Support for up to 128GB DDR4 memory capacity

Intel’s 10th generation of H-Series mobile processors includes their first-ever mobile I9 processor, the I9-10980Hk. The I9-10980HK a is fully unlocked 8 core, 16 thread processor with 16 MB of Intel Smart Cache and a 45-watt thermal design power, or TDP. It’s also Intel’s fastest mobile chip to date with a base clock of 2.4 GHz and a boost clock of up to 5.3 GHz. The boost clock of 5.3 GHz is on the two fastest cores. We’re still unsure how the I9-10980HK will boost on all 8 cores.

To achieve the 5.3 GHz frequency, Intel has implemented their Thermal Velocity Boost, or TVB technology paired with Turbo Boost max Technology. What Thermal Velocity Boost does is enable higher performance temporarily, and under the right circumstances, to allow your processor to go past its initial boost clock speed increasing the performance of your processor. Basically, Intel’s TVB will boost your clock speed an additional 200 MHz, as long as the temperature is below 65°c and the turbo power is available. 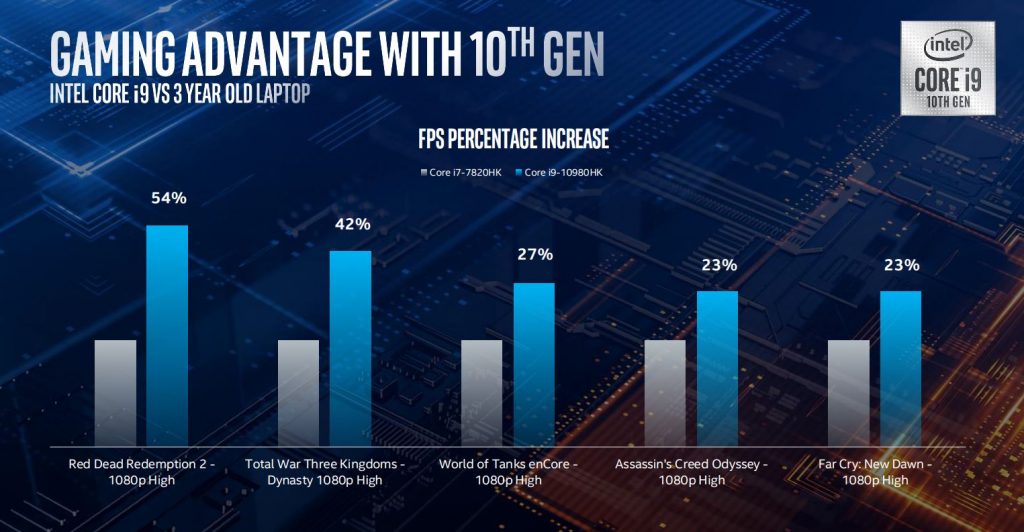 Turbo Boost Max Technology 3.0 optimizes for lightly-threaded performance by identifying your processor’s fastest cores and pushing off heavy workloads to them. Intel’s 10th gen H-Series processors also feature their Adaptix Dynamic Tuning Technology. Intel Adaptix Dynamic Tuning is a powerful software toolkit that allows laptop manufacturers to achieve the highest performance from the 10th Gen Intel Core mobile processors. It does this by monitoring things such as system temperature, fan speed, power source (AC or DC), usage mode, current processor state, and more. It will then adjust processor power to maximize performance within the thermal limits of the system. 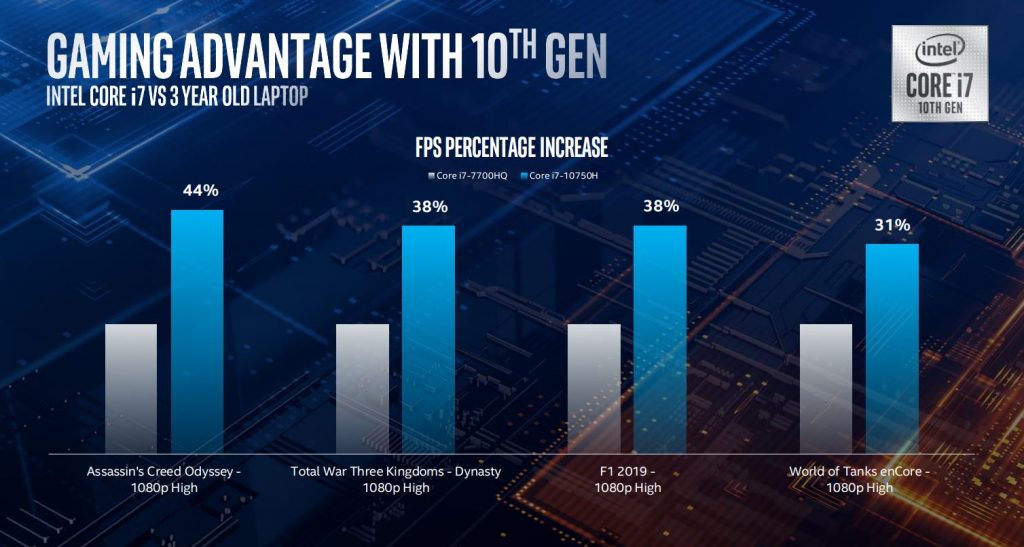 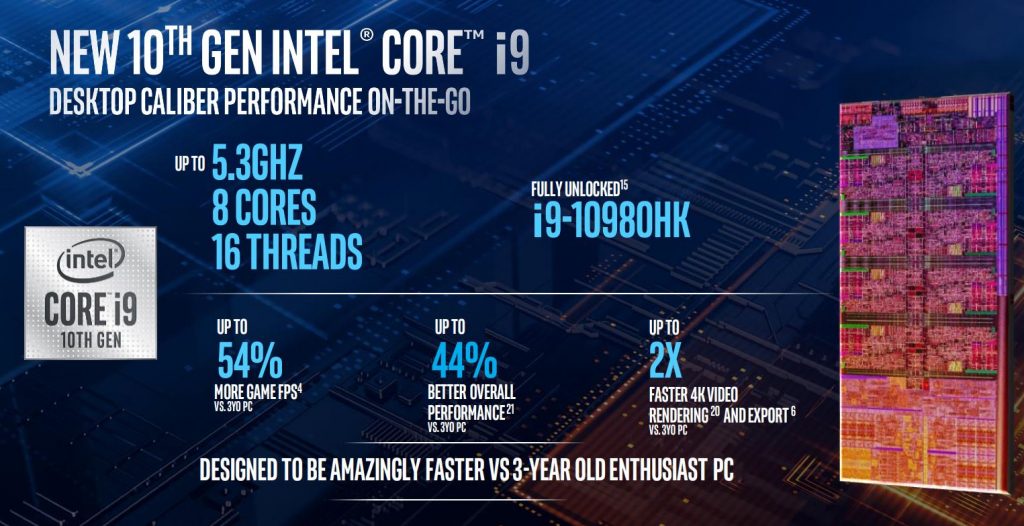 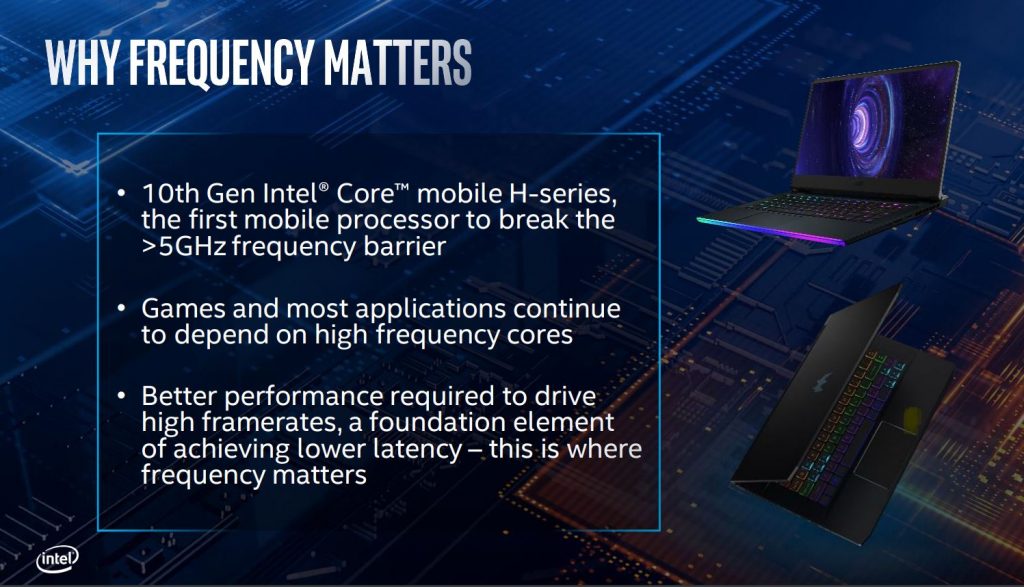 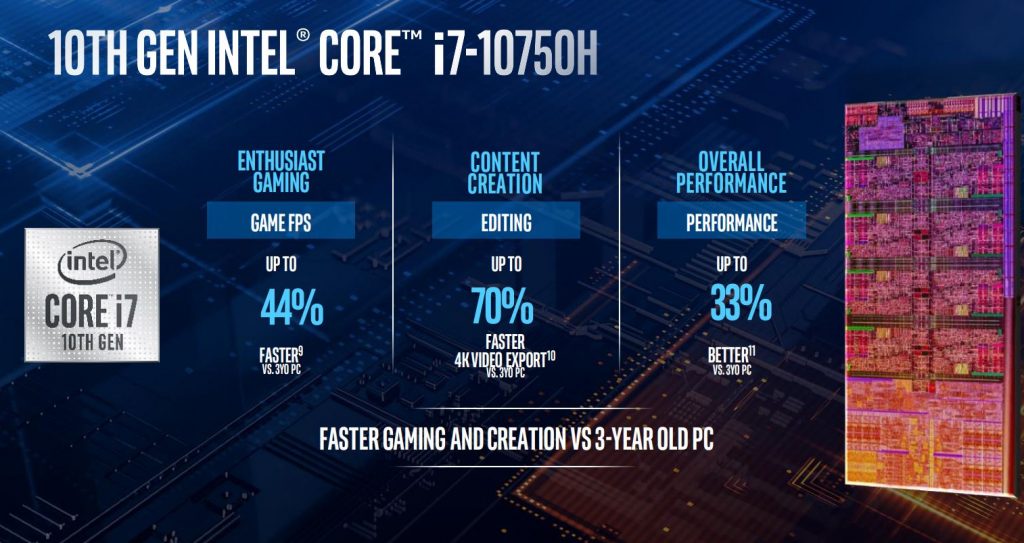 Intel has co-engineering over 100 different laptops featuring their 10th gen H-Series processors, with some of the leading companies in the business. These designs cover everything from gaming laptops to consumer-grade and workstation laptops. More than thirty of these laptops will be thin and light designs of 20mm or less.

Many of Intel’s 10th gen H-Series laptops will feature companion displays, 2-in-1 designs, and slim bezel 17” laptops. Other exciting features coming to Intel’s 10th gen H-Series laptops are HDR 1000 panels and 300 Hz refresh rate panels. The 300 Hz refresh rate panel is something we witnessed firsthand at CES this year. We can attest that it looks as great as it sounds.

Intel’s 10th gen H-Series laptops will also support Intel Optane memory H10. This is the industry’s first drive to integrate Intel Optane memory with Intel’s QLC 3D NAND storage. The drive includes a 32 GB Optane module and 1 TB of QLC 3D NAND storage. The H10 can reach sequential read speeds of up to 2400 MB/s and sequential write speeds of up to 1800 MB/s.

Laptops featuring Intel’s 10th gen mobile processors will allow you to take premium, high-quality content with you anywhere you go with HEVC 10-bit encoding and decoding as well as VP9 10-bit decoding. This allows for High Dynamic Range (HDR) and Rec. 2020 (Wide Color Gamut) that provides enhanced image and video viewing experiences. In addition, you can stream premium 4k UHD videos, as well as 4K videos with 360° viewing.

All around, Intel has me personally excited for their 10th generation H-Series processors. Especially the I9-10980HK. I’ve been putting off getting a new laptop for a very long time. Mainly due to the fact I couldn’t find a laptop that could do what I want it to do, the way I want it done. Essentially, I’m a complete hardware snob. However, the thought of a 45-watt mobile processor with 8 cores and 16 threads that runs at 5.3 GHz. Well, who wouldn’t get excited over that? The 10th gen mobile launch has really gotten me excited to see what Intel has in store for their 10th gen desktop launch. 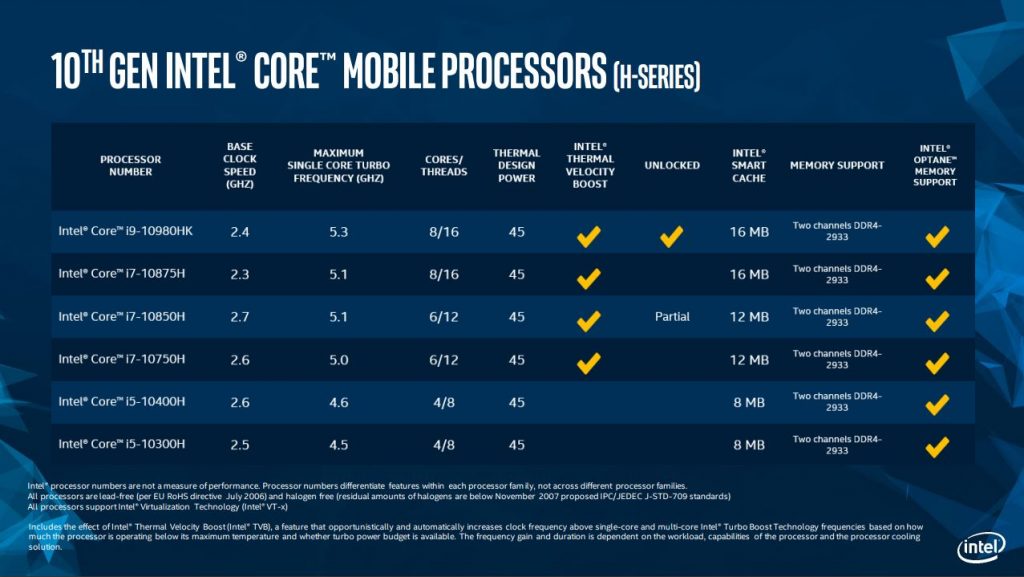 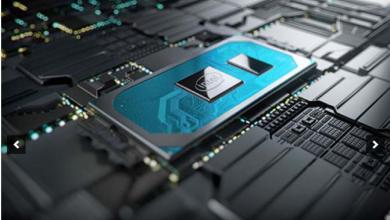