A while back Tim Willits of id software reached out to me about doing a case mod for a new game that would be coming out. It turned out that the team working on the RAGE 2 game wanted something special. I was thinking it would be a fun project. Then this happened… “So, we would like to mod a SEGA Dreamcast, but it needs to be able to run RAGE 2 without problems and look stock. Can you do this?” “No problem, it can be done” (thinking to myself what the hell did I just get myself into). Thus the journey began to make this RAGE 2 Dreamcast Mod into reality.

After the shock wore off that I just agreed to create a one-of-a-kind custom Dreamcast PC I knew I had to get my sh#* together and get moving. Believe it or not, I actually had an old SEGA Dreamcast in one of my closets. Taking it out I soon realized just how small this thing was its height and width. Needless to say, I once again said some choice words to myself. But I am a modder and I have been doing this for almost two decades. Nothing will stop me (fingers crossed).

I did not want to destroy a working Dreamcast, let alone my families. So off to eBay, I went. I did not realize that you could buy just the shell of the console, which made me so happy. I quickly bought one so that I could dive deep into this project.  Now you must remember that the two major things about this project are that –

Here is the shell as I got it. If you look closely you can tell that the top and bottom half are not the same color. 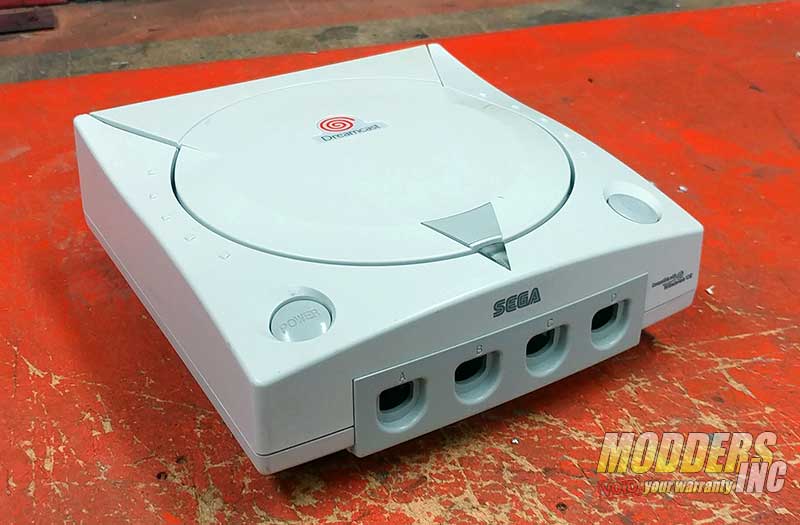 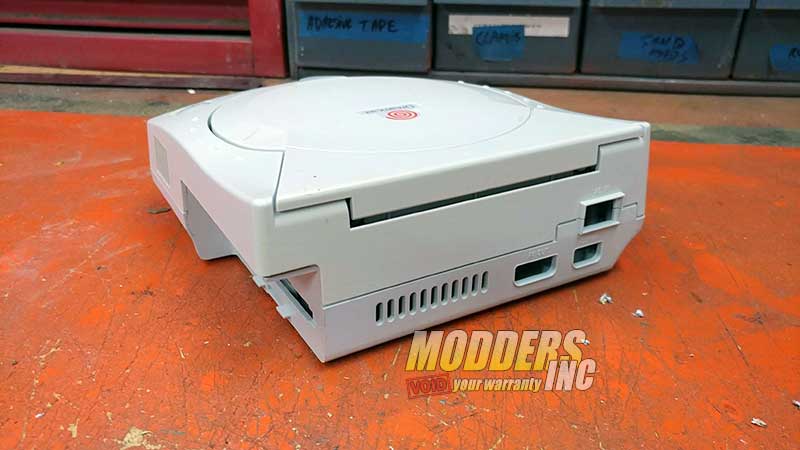 Missing here is the modem accessories, which I had to buy and just use the outer shell of it. 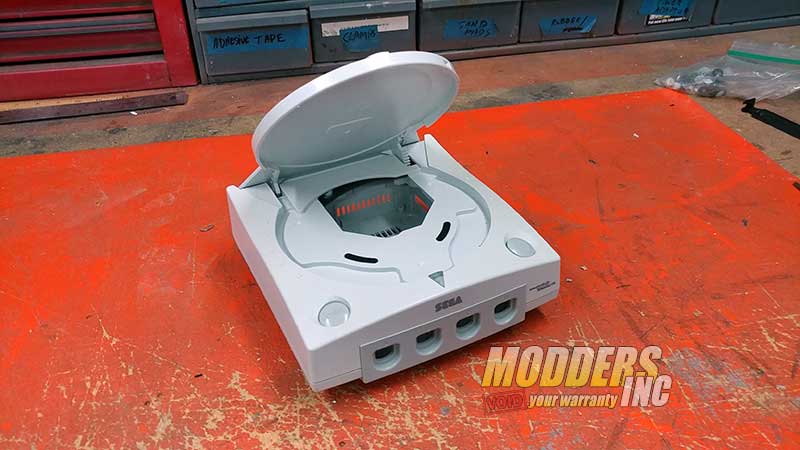 Taking some quick measurements I soon found out that the maximum space I had on the inside was about 7 inches by 7 inches by 2.75 inches high. Not a lot of space to put stuff into. I also realized that most everything inside the shell would have to go. 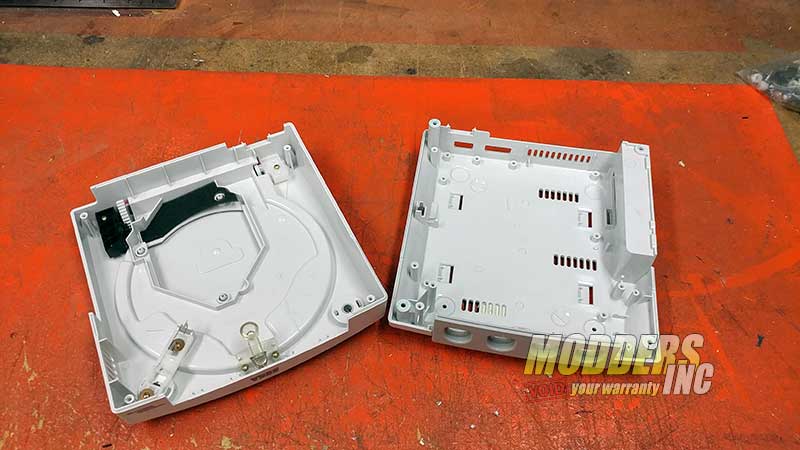 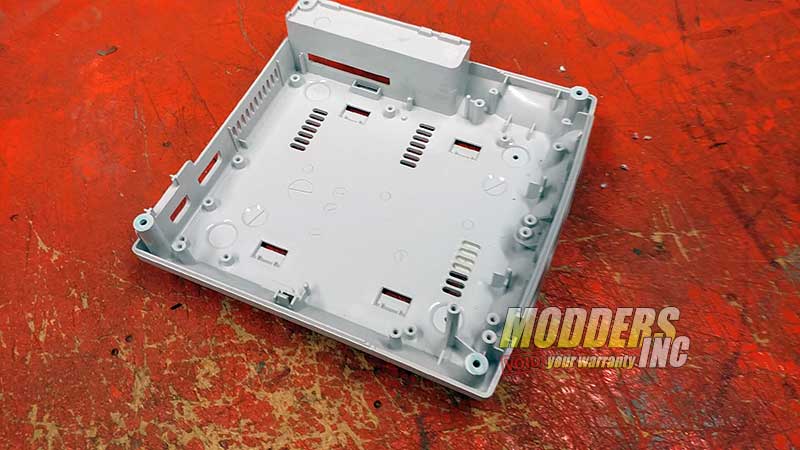 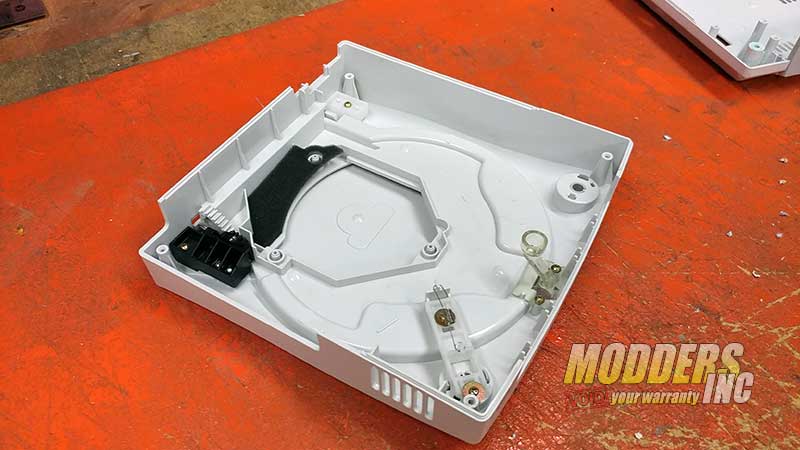 So out came the Dremel and things started to disappear.

Trying to find hardware for a full system to fit in the tiny space was really becoming a challenge. Searching and contacting all of the manufacturers we work with kept leading to “almost” or “not quite” endings. Finally one day, after weeks of searching, one of the Modders Inc team members said “Hey what about the Alienware Alpha R2?” when he said that “DING! Winner, winner chicken dinner!” went off in my head. Looking just 20 feet to my right I had one sitting under my TV for an HTPC. Out comes the tape measure and well it might just work. I took mine apart, did some testing and unbelievably the measurements were almost right on the money – within a 1/8 of an inch. Off to the Alienware, website to buy one… if they still make them. 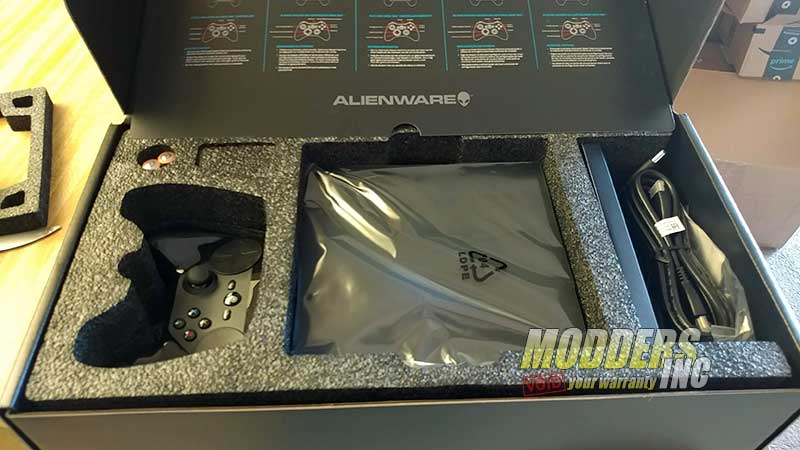 AH! They had some in their old stock and one was on the way to the house within a week. 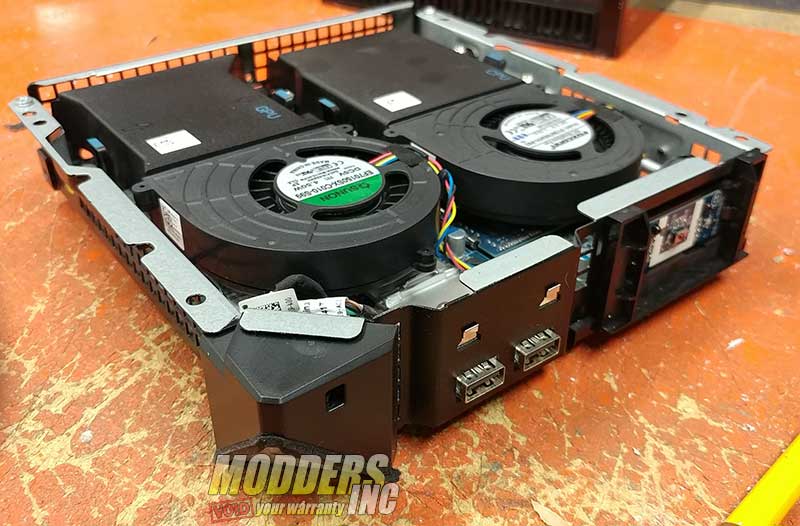 1/8 of an inch doesn’t sound like much but more modding was needed to be done to the Dreamcast shell. 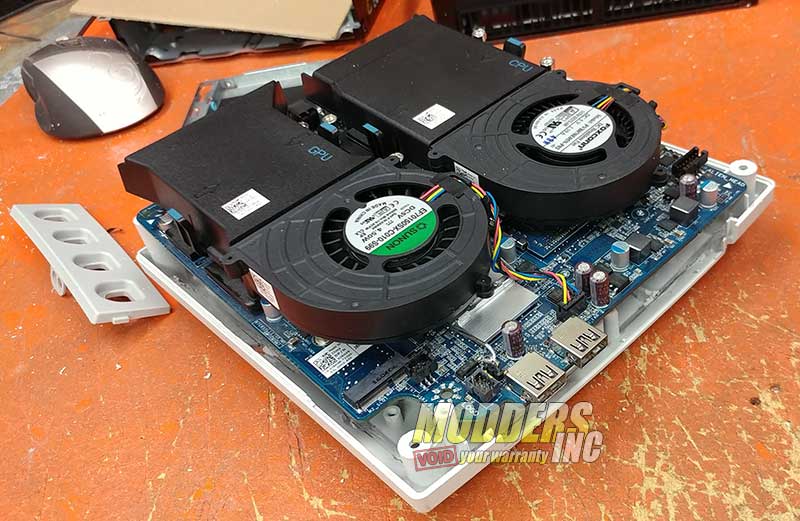 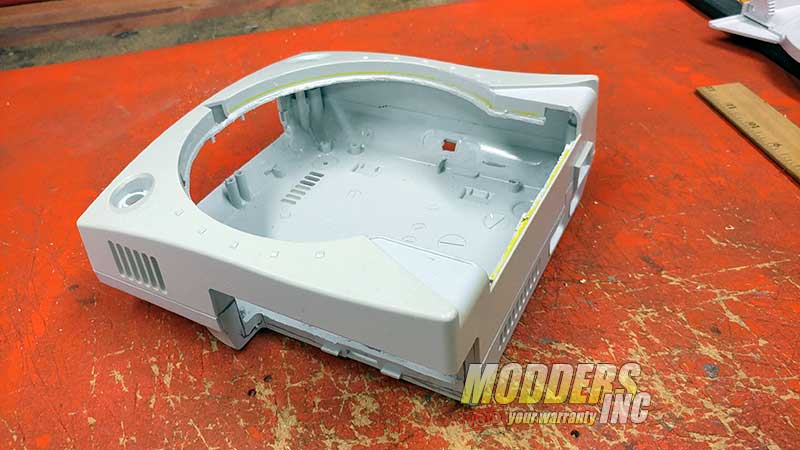 I had to remove the whole area that once was where the CD reader was. Again taking great care to make sure that it looked stock when closed. I made sure that the lid could be opened in case more cooling to the hardware was needed, plus you could see what was actually inside the Dreamcast mod. 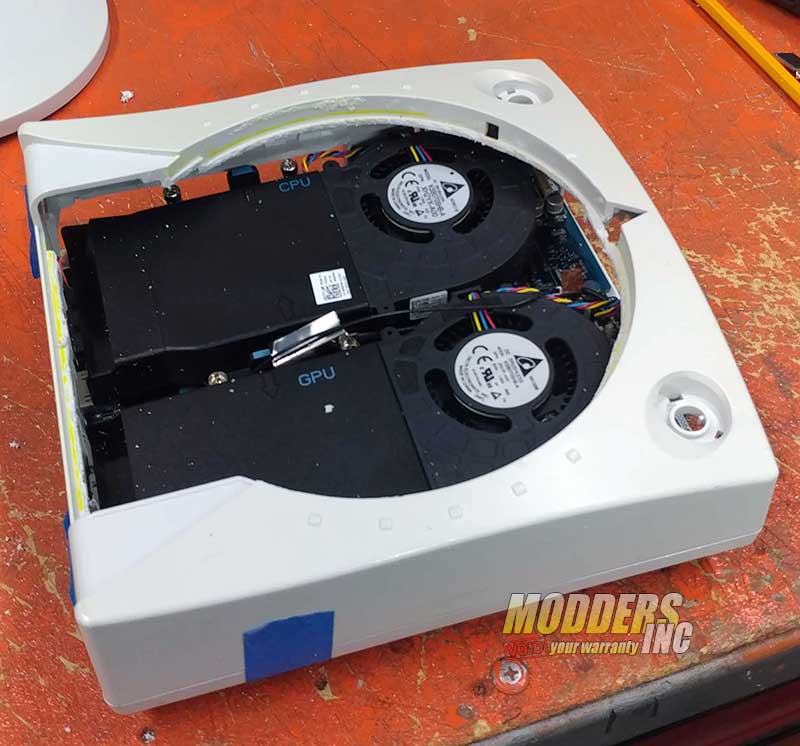 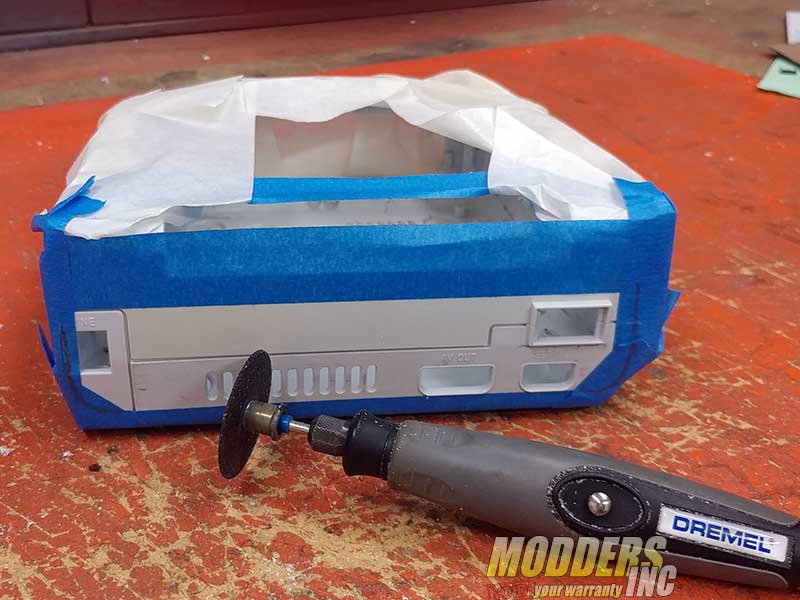 The rear of the shell needs to be cut to allow the redesigned I/O plate to sit perfectly flat in the shell. 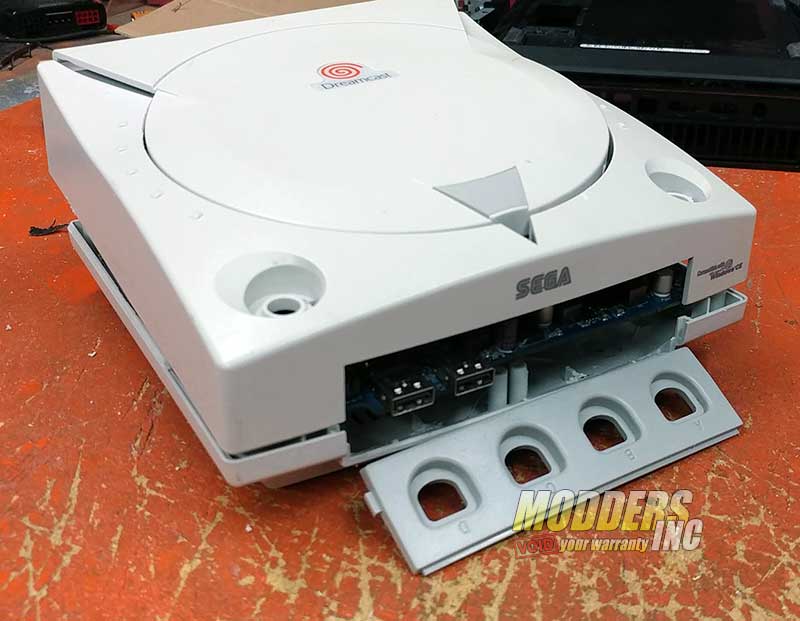 To will try and shorten up the story/worklog and well truthfully I did not take that many pictures as there was a lot of work to be done. I did have to do a lot of mods (it may not look like it, which is the whole point of the Dreamcast mod and over 100 hours of work) to the inside of the shell, made special plugs to go inside of the controller ports to make them look stock. Wiring to make the original start button be the new start button. Lighting all the things that lighted up before. Add some air flow ports that looked like it was part of the case from the factory and some redesign of the hardware location. Added more memory, an SSD, Windows 10 and more. Repainted to it almost stock color.

All-in-all it was an awesome project to do and I am very proud of how it came out looking as if SEGA made this. 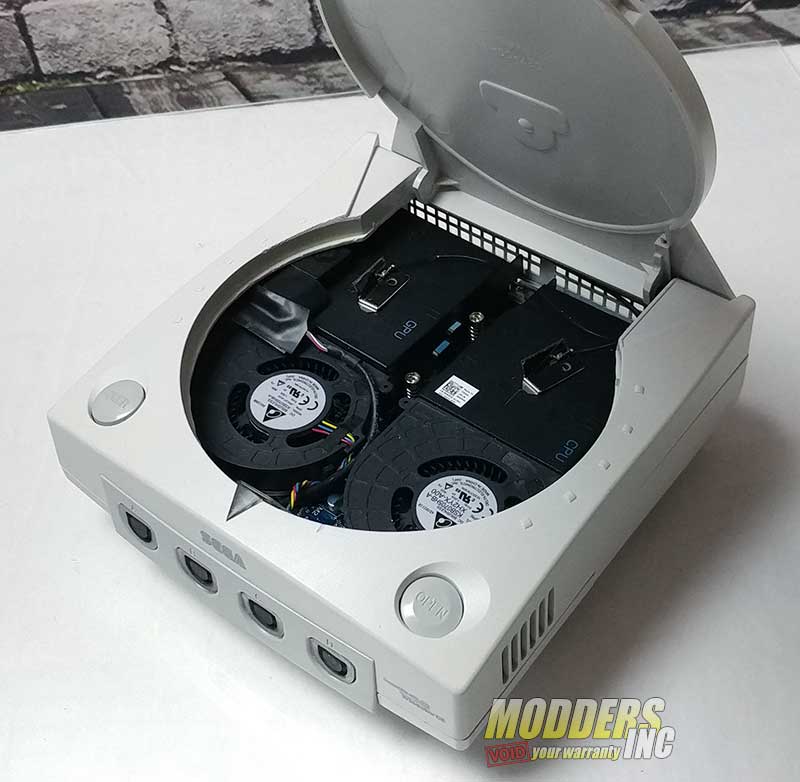 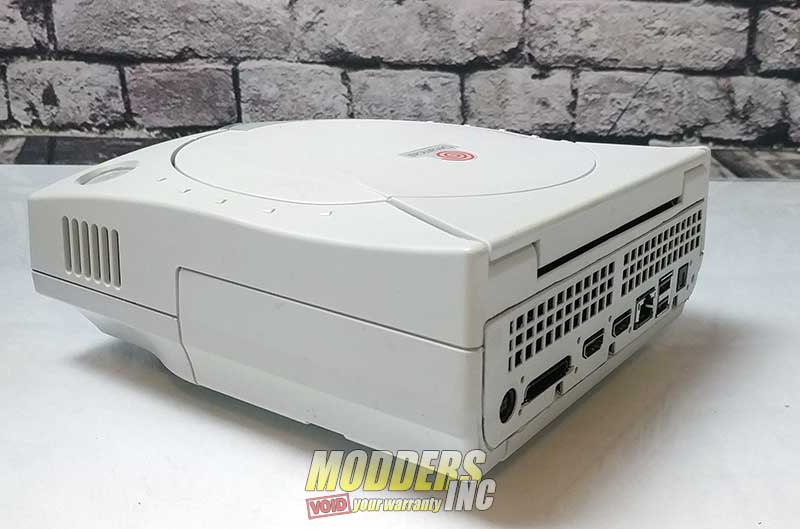 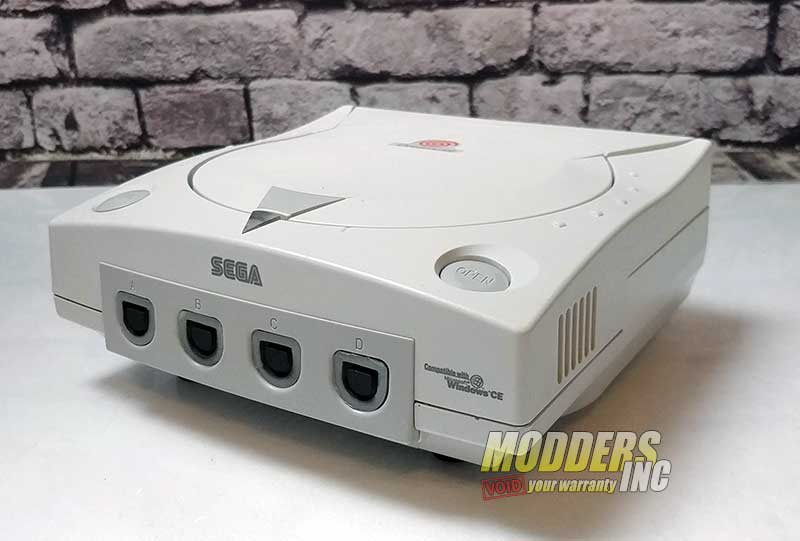 Note: Just before it was to be shipped Bethesda wanted a color change. 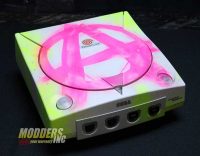 I was not fond of this version. I  liked that they painted it black.