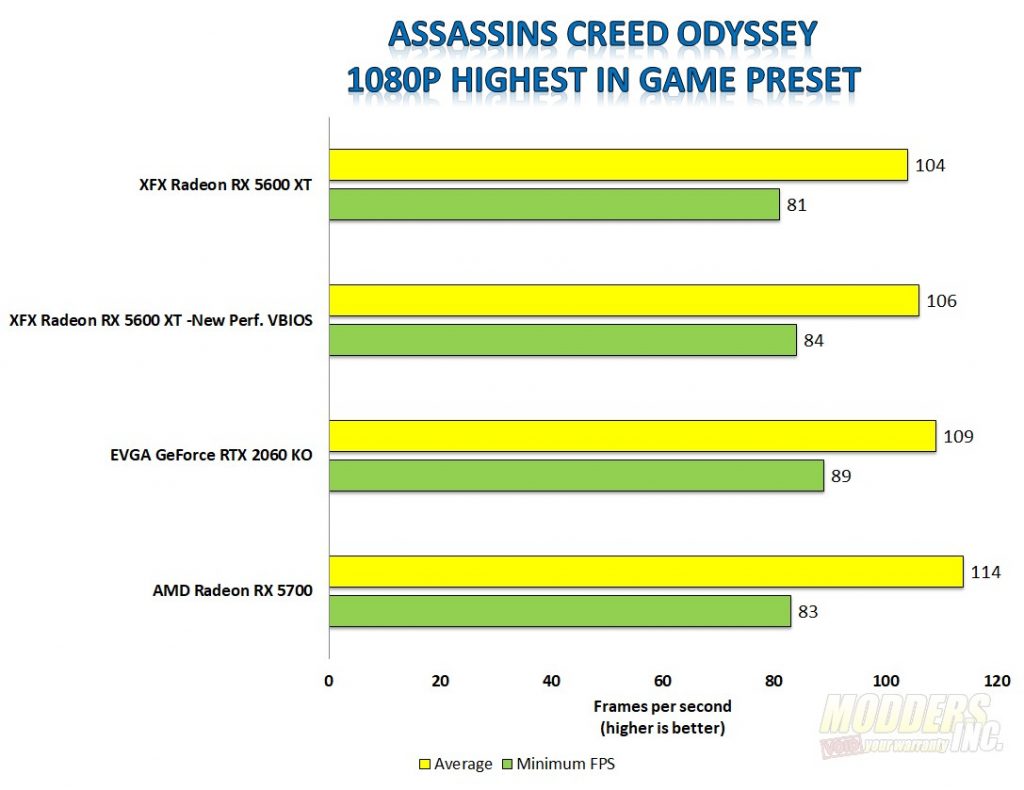 Assassin’s Creed Odyssey is a new game in our benchmark suite. The Radeon RX 5600 XT with the old BIOS attains an average framerate of 104 FPS at ultra settings. The updated BIOS yields a slightly better result at 104 FPS and the RTX 2060 tops out at 109 FPS.

Borderlands 3 is an action role-playing first-person shooter video game developed by Gearbox Software and published by 2K Games. It is the sequel to 2012’s Borderlands 2, and the fourth main entry in the Borderlands series. Borderlands 3 was released on 13 September 2019 for Microsoft Windows, PlayStation 4, Xbox One and on 30 October 2019 for Apple macOS. 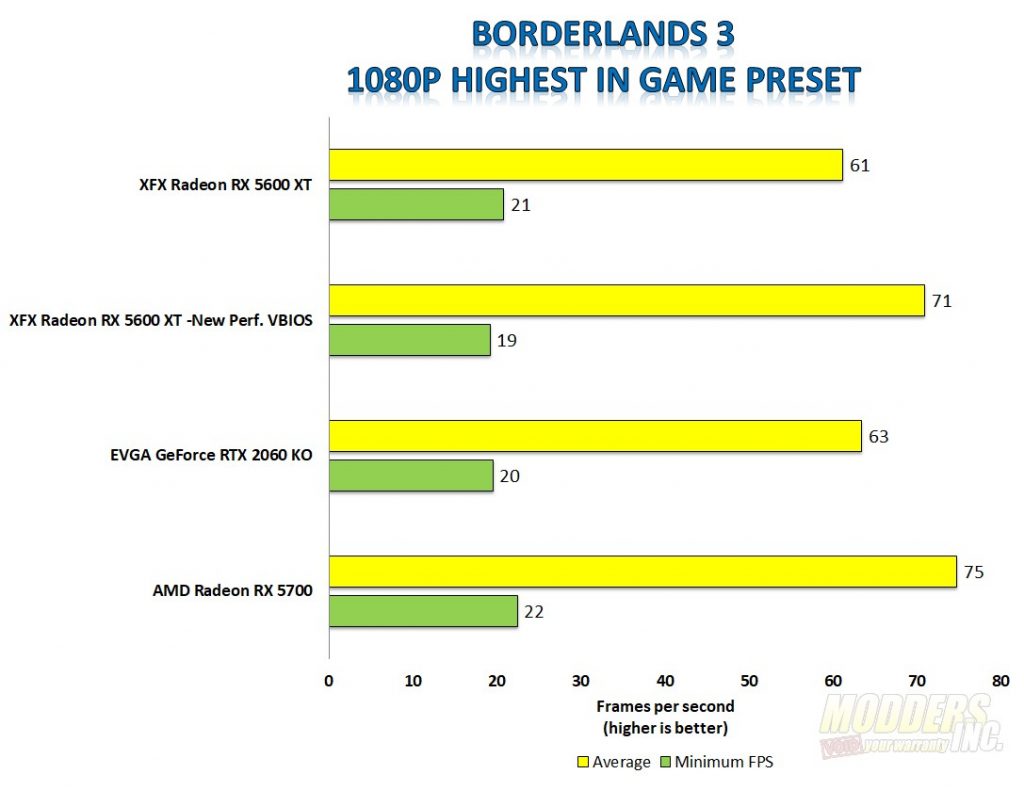 Borderlands 3 is another one of our new titles. The updated BIOS gives the RX 5600 XT a significant jump over the “stock” BIOS. This leads to an increase of 10 frames per second to an average of 71 fps in the game and pushed it just past the RTX 2060 KO’s average frame rate of 63.

Deus Ex: Mankind Divided is an action role-playing video game developed by Eidos Montréal and published worldwide by Square Enix in August 2016 for Microsoft Windows, PlayStation 4 and Xbox One. Versions for Linux and macOS systems were released in 2016 and 2017, respectively. It is the fourth game in the Deus Ex series, and a sequel to the 2011 game Deus Ex: Human Revolution. The gameplay—combining first-person shooter, stealth and role-playing elements—features exploration and combat in environments connected to the main hub of Prague and quests which grant experience and allow customization of the main character’s abilities with Praxis Kits. 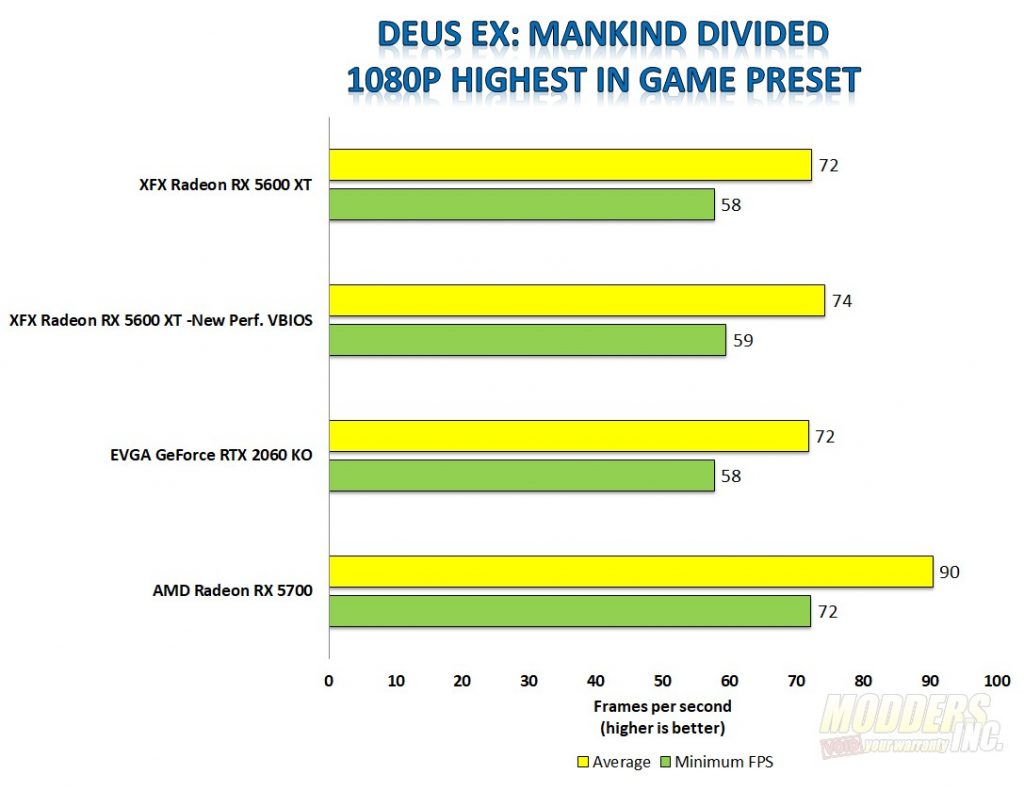 In Deus Ex mankind divided, the RX 5600 XT and RTX 2060 KO are for all intents and purposes, tied. With the “stock” BIOS both cards average 72 FPS. With the new BIOS that jumps up 2 frames per second but still falls within the margin of error for testing purposes. 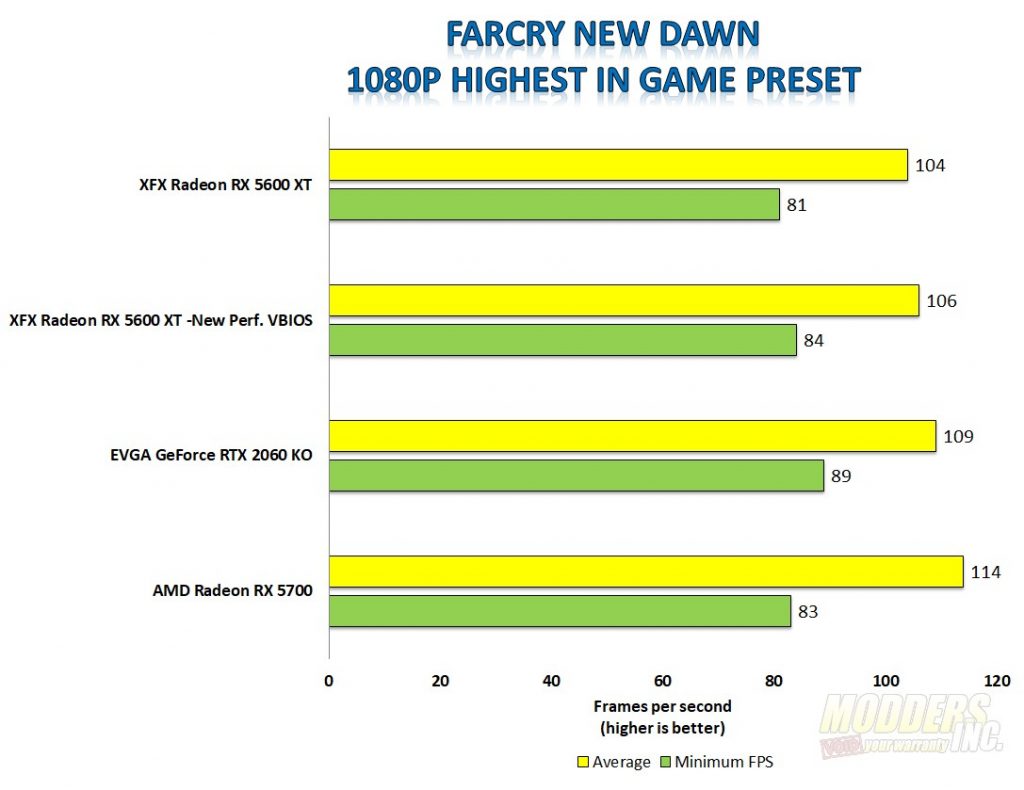 Farcry New Dawn shows that the RTX 2060 has a slight lead in this AMD optimized title. The RTX 2060 slugs out a 109 average FPS with the RX 5600 XT slightly behind at 103. For me, this is essentially a tie as the difference in frames per second falls within the margin of error. 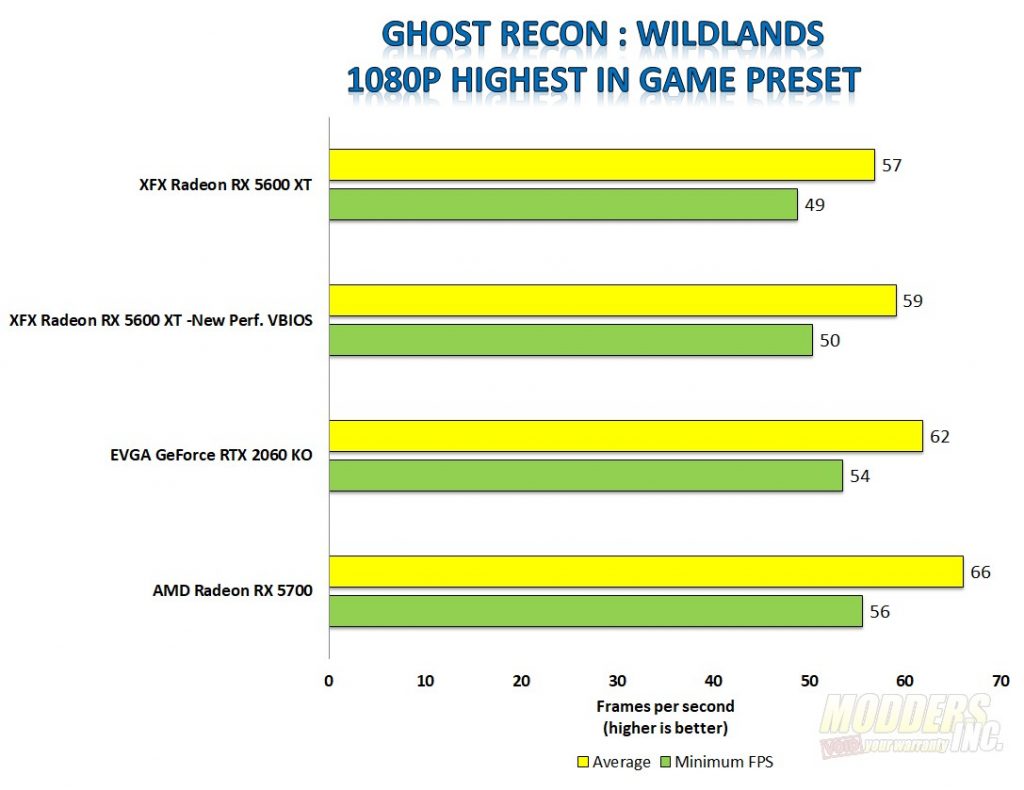 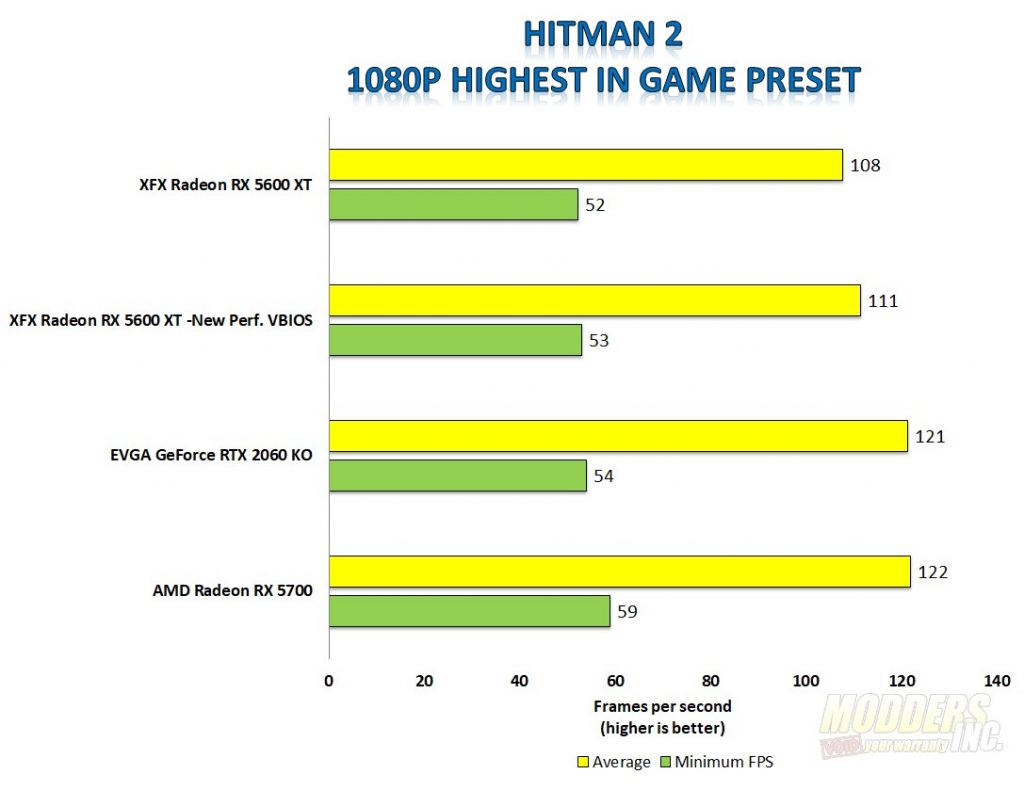 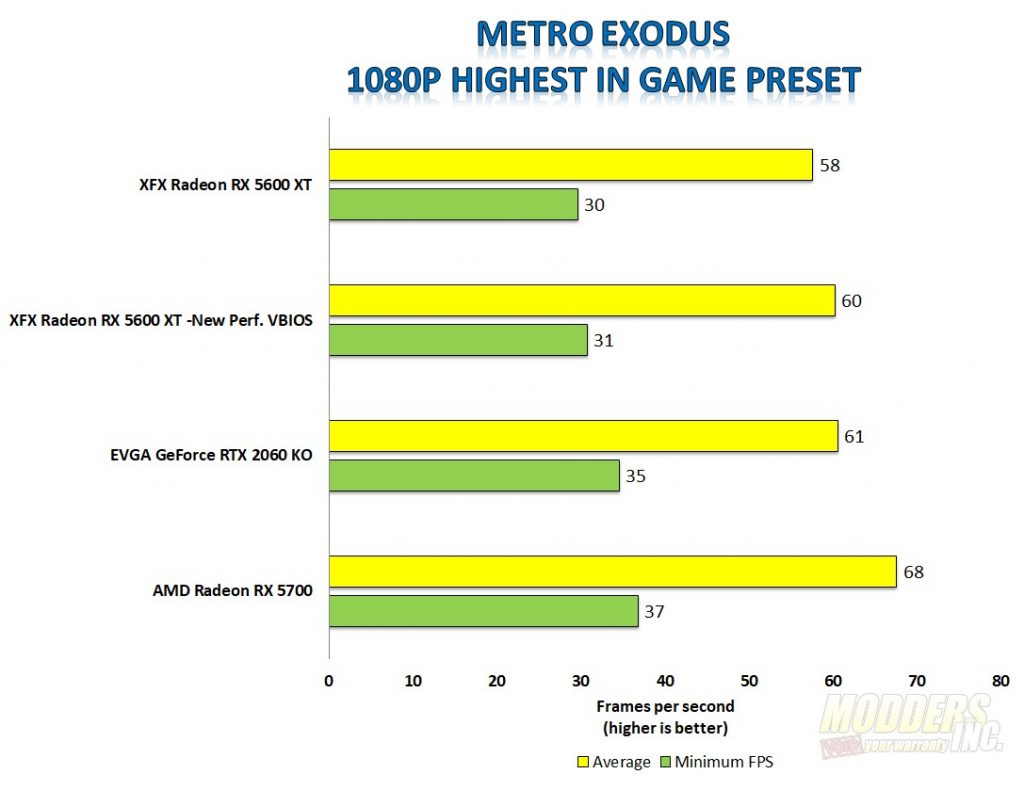 Metro Exodus was tested with the ULTRA preset and Hairworks turned off. RTX/DLSS was not used for the RTX 2060 testing. In Metro Exodus, we essentially have another tie. 1 frame per second separates the RX 5600 XT and the EVGA GeForce RTX 2060 KO. 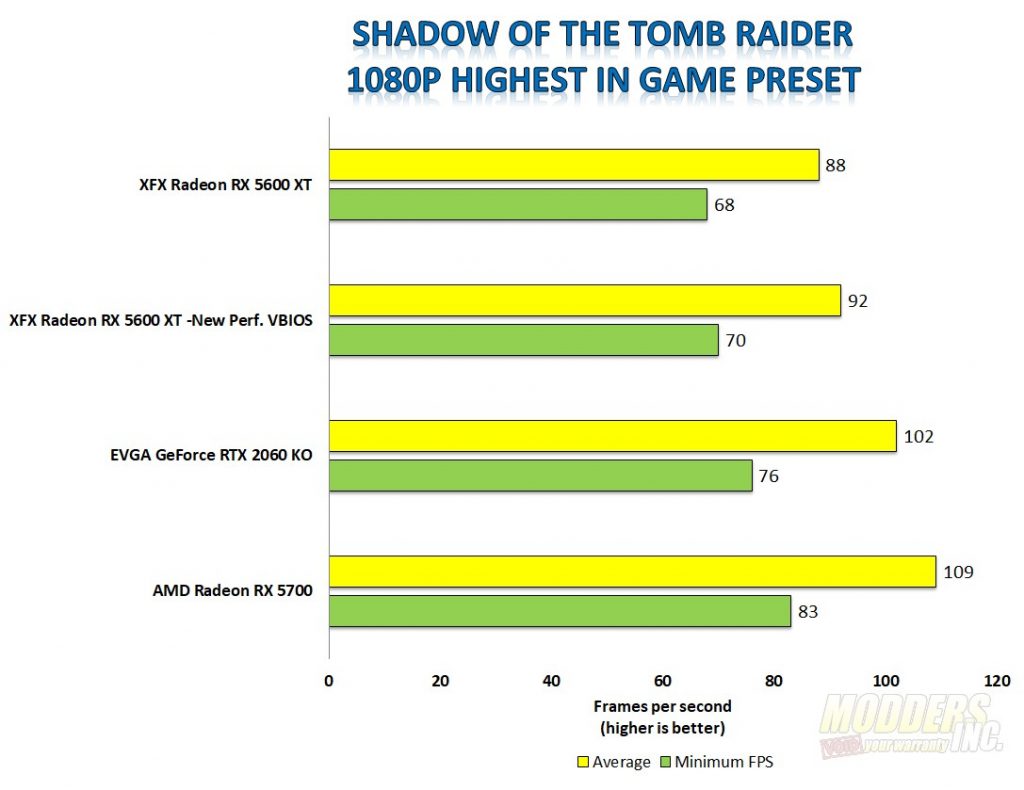 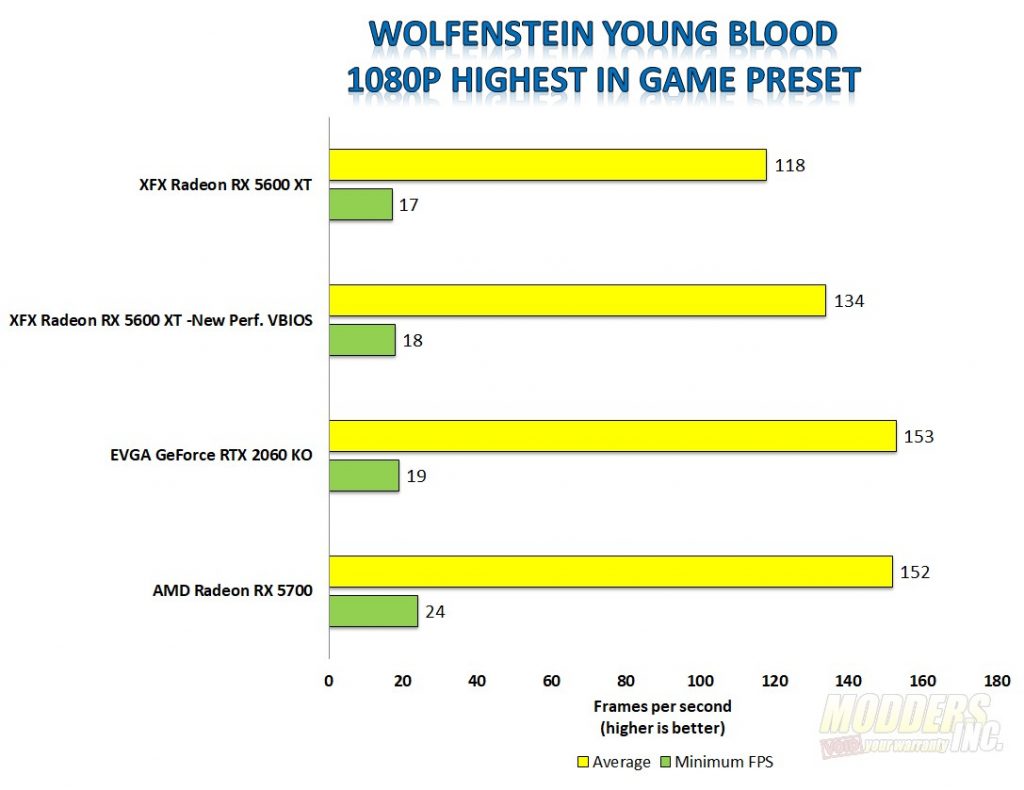 Wolfenstein Young Blood shows the RX 5600 XT lag behind the EVGA RTX 2060 KO by a good margin and in fact, the RTX 2060 KO matches the RX 5700 however, we’re starting to see a bit of CPU bottleneck here. The RX  5600 XT scores 134 FPS with the new BIOS installed. This is a significant uptick in performance over the stock BIOS at 118 frames per second.

Red Dead Redemption 2 is a Western-themed action-adventure game. Played from a first or third-person perspective, the game is set in an open-world environment featuring a fictionalized version of the Western, Midwestern and Southern United States in 1899, during the latter half of the Wild West era and the turn of the twentieth century. For most of the game, the player controls outlaw Arthur Morgan, a member of the Van der Linde gang, as he completes numerous missions—linear scenarios with set objectives—to progress through the story; from the game’s epilogue, the player controls John Marston. Outside of missions, the player may freely roam its interactive world. 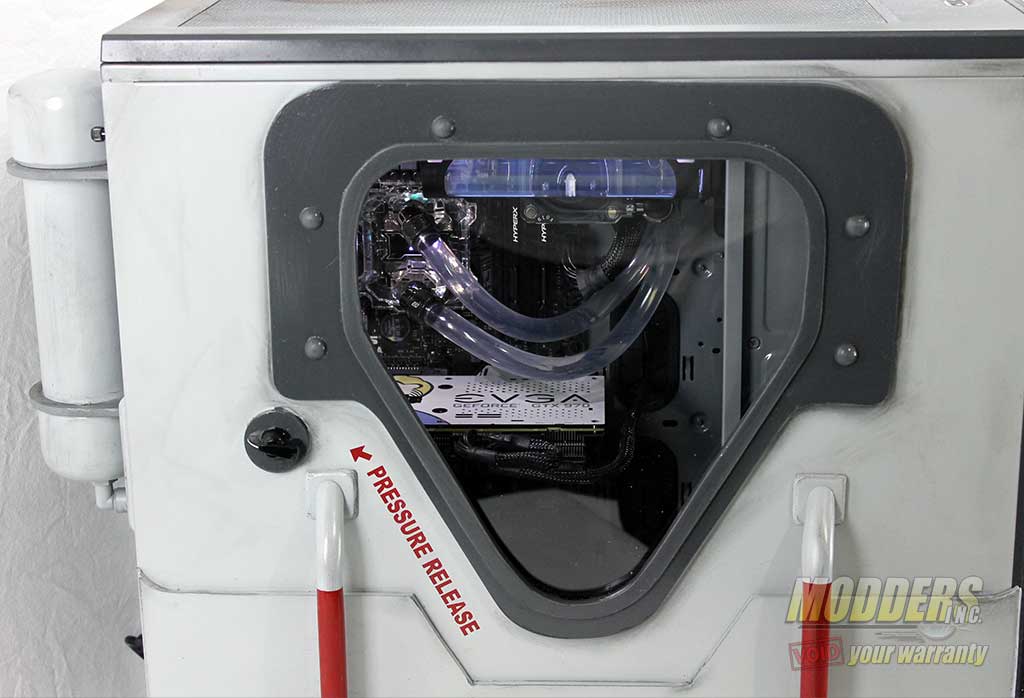