“This case modding project is based on SciFi Channel’s “Battlestar Galactica” television series. The chassis I’m using is the Cooler Master Stacker 830, because it’s characteristics are consistent with that of the Galactica ship on the show. That, and I had just won it in Cooler Master’s case mod contest. ;-)  “ Like the ship, the case is covered with ribbing and armor paneling, and has a landing bay on top, and two engine pods on both sides.
Go take a look at Bods-Mods and see the other great mods he has done! 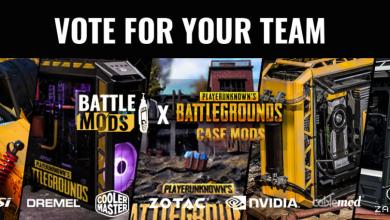 It is time to Vote for your favorite PUBG Case Mod