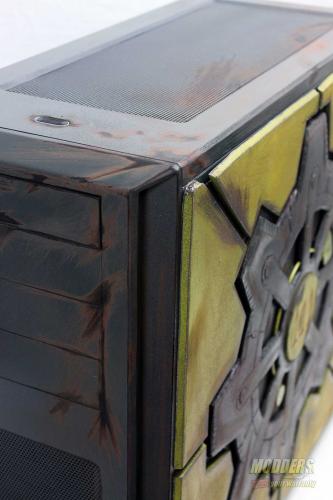 I finally got to do a part of a case mod that I have always wanted to do the most, creating a rust effect. I know that some can make it by being a master of the airbrush – which I am not- or using stuff from the local craft store. I looked into that solution but was not happy about what the final results on the way it looked. So off to Google and found what I wanted.

After searching for a couple of hours and reading through a few forums I found what I was looking for. Those that make the scaled military models know a thing or two about creating realistic damage and rust. The only problem I could see for me was that I needed to do is to do it on a much bigger scale than an 8 inch model, but I going to give it a try anyway. Part of the beauty of creating rust or worn effect is that you don’t have to be perfect.

Here is what I did. You start off with a base coat of a dark brown, then spray a lighter brown in different spotty directions, and lastly a more “rust” color brown done the same way. The whole idea here is to create random layers of brown so when the rust effect is done it looks natural and real.

Yes it can be done on plastic and here is the brown paint on a front bezel.

I was doing the whole PC with effect and here is the side panel done with the brown colors.

The inside and outside of the frame was done as well. I told you I was doing the WHOLE case.

The inside of the case got the same treatment as the rest of the case, but  most of the inside will stay more of the final coat machine grey spray paint as I waned to do more scratches than rust on the inside.

The whole case pretty much done.

Some might think it looks pretty nice right now, but to do the job I wanted it needed to look as real as possible and from my research there was a trick to it.