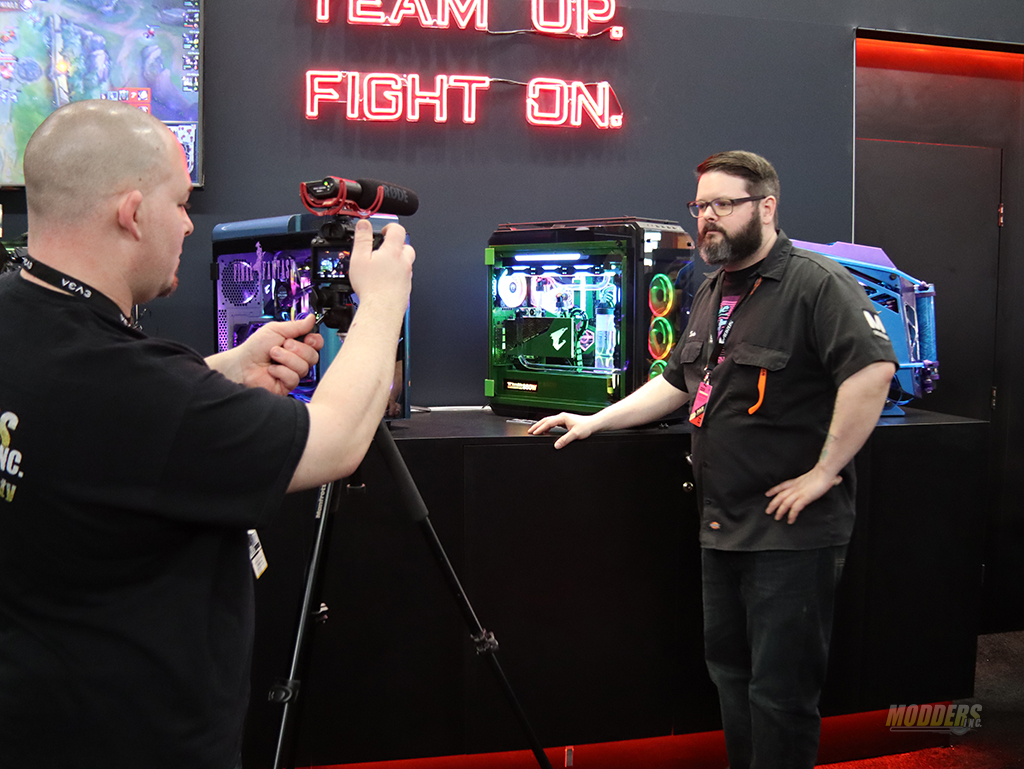 Events such as Pax East give us as content creators a unique opportunity to not only provide our readers with content on exciting new products. But these events also allow us to interact with the community in ways beyond just social media. Generally, we visit with vendors who are showcasing their newest products. However, due to the coronavirus outbreak, Pax East 2020 was a bit different.

There was a ton of empty floor space due to companies backing out at the last minute. Companies that we meet with every Pax such as Hyper-X and ASUS didn’t have a floor presence. Many other companies have delayed launches, so they had little new to show off. This allowed us to focus the little time we had during the show on the modders within the enthusiast community. No show Modders-Inc covers would be complete without a visit with the guys at ModMyMods. Although they had builds all over the convention floor, they spent the bulk of their time helping out at the Aorus Booth. 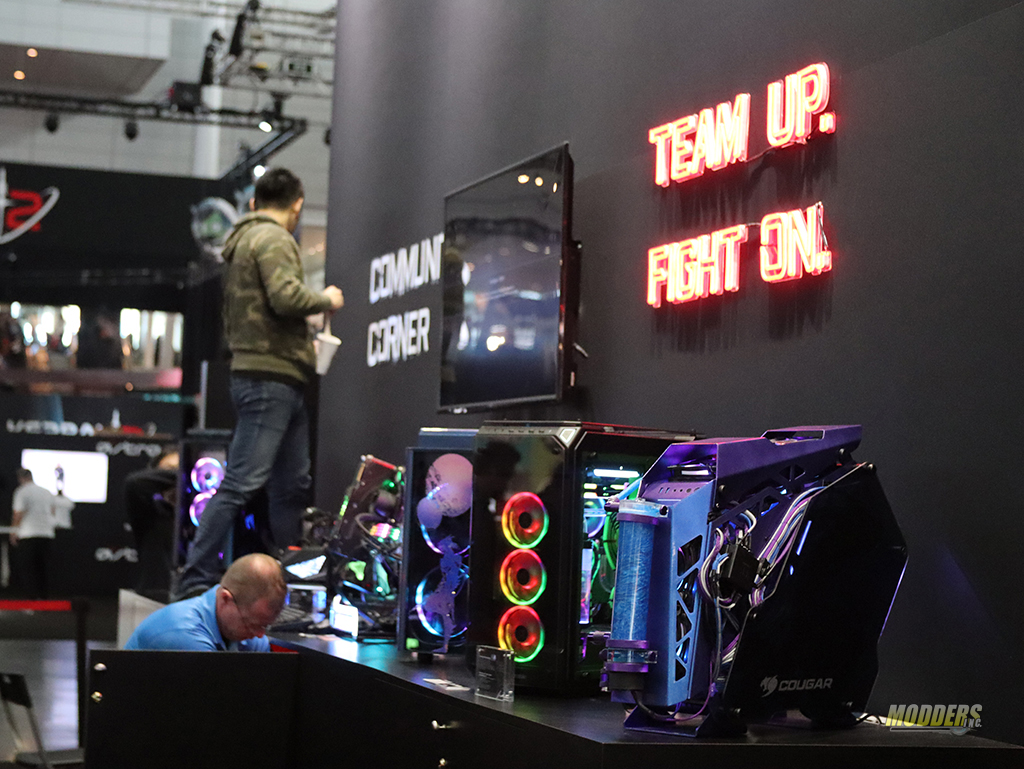 I first came across the guys at ModMyMods at Pax East in 2016. Since then, they’ve grown as a company and I’ve grown as a writer. But one thing remains the same, they’re still my favorite stop at Pax East every year, even when they don’t have their booth. In the past, they have partnered with Watercool and Alphacool for Pax East. However, this year, they were set up at the Aorus Booth at Pax East 2020. They also had builds at the Patriot booth, EVGA booth and the Corsair Booth. But regardless of where they were, we just had to stop by and say hi.

The first build we took a look at from ModMyMods was their “Green Machine” on display at the Aorus Booth. This is a custom powder coated monster featuring the highly sought after Aorus Waterforce hardware. The board is the Z390 Aorus Extreme Waterforce and it’s running an I9 9900k. The GPU is the Aorus Waterforce RTX 2080. The boot drive is a Gigabyte 256 GB M.e SSD. The system is running 32 GB of Thermaltake WaterRAm RGB. The case, power supply, and all the water cooling hardware were provided by Thermaltake. The case is a custom powder coated Thermaltake View 71.

The next build ModMyMods showed off was their all Corsair Hydro X build. This is a custom water-cooled PC using Corsair’s new line of Hydro X water-cooling hardware. The system is housed in the Corsair 680x case. The MEG Z390 ACE Motherboard was provided by MSI. The system is running the I7-9700KF. The Hydro X build has 32 GB of Dominator Platinum RAM and the EVGA RTX 2070 Super XC Gaming has a Corsair Hydro X water block.  Like everything else the guys at ModMyMods do, the Hydro X build is beautiful and shows off the Corsair hardware well.

ModMyMods also had custom water-cooled, small form factor builds at both the Patriot booth as well as the EVGA booth. Both have laser-etched images on the front of the Jonsbo cases. One of the builds they had on display belongs to the wife of the Owner of ModMyMods, Joe Gialanella. The appropriately named “Tree of Wife” build was on display at the EVGA booth. The “Tree of Wife” build is running an I7 6700k on a Z270 Stinger from EVGA. The graphics card is an EVGA RTX 2080 with an EVGA Hydrocopper water block. The Tree of Wife build is using all Alphacool water-cooling hardware. 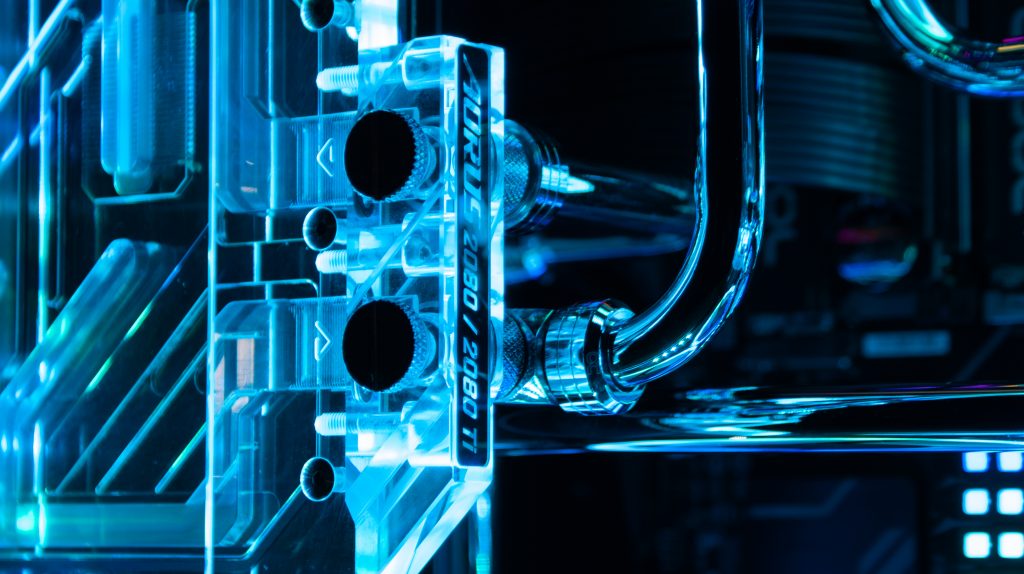 I’m always amazed at what the guys at ModMyMods have to show off at these events. Their staff is always friendly and willing to answer any questions. Not to mention they have never turned me down for an interview. I will have to say that I was a bit upset that they left my favorite ModMyMods employee back in Rochester, NY for this event. Skelly J was missed at pax East 2020.