Before I go into the rest of my final thoughts, I want to go over my observations for overclocking, temperatures, and power draw. To start, I used a 2-hour loop of Superposition to test the stability of the benchmark and test my overclocks. As far as overclocking went, I was able to achieve a stable overclock at +50 on the GPU and + 750 on the memory pushing the GPU or Memory resulted in GPUz reporting the power limit had been hit consistently.  Actually, GPUz reported the power limit reached in the stock configuration as well although, not as often. This pushed the boost clock to 1995 Mhz with occasional peaks to 2025 Mhz and the memory to 1281.5 MHz. As far as temperatures, there is a two-degree difference in temperature when looking at stock vs. overclocked. I used MSI Afterburner to monitor temperatures and saw 65°C when the GPU is stock and 67°C with the above overclock applied. No extra fan noise could be heard at the overclocked level. The backplate did get quite warm to the touch. I used a non-contact thermometer to measure the backplate temperature and near the end of the two-hour run, the temperature of the backplate measured 53°C. For power draw, GPUz reported a maximum board draw of 377.5 watts and an average over the two-hour test of 355.4 watts.

Aesthetically, the MSI GeForce RTX 3080 Suprim X is a beautiful card. I really dig the color scheme that MSI choose to use. To be honest, the Black and Red colors have just been overdone in my opinion. It’s not that they don’t look good. More like I’ve just seen too much of it.  The Silver, Grey, and Black color scheme lend itself well to this GPU and I think it gives it more of a premium look, considering that it is a premium product. The cooler itself is an evolution of the Frozr series. I’ve always liked the Frozr coolers from MSI for their good cooling capacity and low noise profile. I review all the GPUs on a DimasTech test bench which, is an open test bench. The entire card is exposed to the air. During load testing, I didn’t hear the Suprim X running at all. The fans do not start spinning until the temperatures hit 64°C. It is silent and provides excellent cooling for the RTX 3080 CPU housed underneath. MSI’s implementation of LED lighting is done well too. The edge lighting is very smooth and well diffused without any visible hotspots from the LED lights themselves. The same also applies to the chevron lighting between the center and end fans and the dragon shield on the backplate. 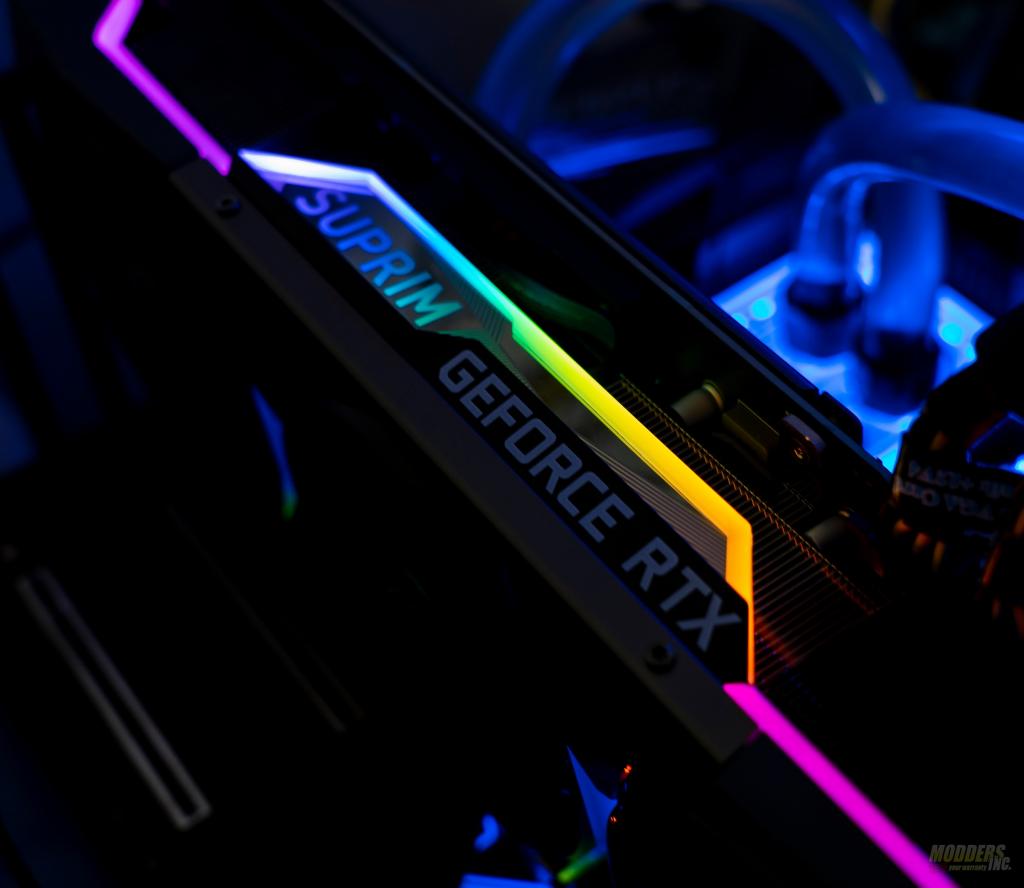 Taking supply issues and price out of the picture for a moment and looking at the just hardware, is the MSI GeForce RTX 3080 Suprim X a great card? My answer is yes. It handled everything I threw at it with ease. 4k gaming and a comfortable framerate and maxed out image quality was no big deal. Throwing in RTX still hurts performance however DLSS helps bring the performance right back in line with expectations. There’s a pretty decent gap in performance between the 2080 TI and the 3080.

The performance of the MSI GeForce RTX 3080 Suprim X is right in line with other premium offerings from other manufactures based on other RTX 3080 reviews that I’ve read and from talking to my peers since this is the only RTX 3080 I’ve reviewed. While the MSI offering performs just as well, there’s also a significant price for similar raw performance.  At $899, the MSI GeForce 3080 Suprim X is $200.00 over the retail Nvidia RTX 3080 Founders Edition and $50 more than the Asus ROG Strix. Still, I can’t help but think of taking that $200.00 and picking up a water block and founders edition. There are trade-offs no matter which way you go. However, to be fair, pricing is not really relevant at the time of this review as retailers are having a hard time maintaining stock levels so consumers can purchase them. Every detail about the MSI GeForce 3080 Suprim X screams that it is a premium product. From the packaging to the included accessories, the cooler, etc. This is MSI’s top of the line RTX 3080. If you’re looking for the top, you’ve found it.  However, in the end, it is going to depend on what you want and if you’re willing to let the extra cash leave your wallet for a premium product.