A Closer Look at the MSI GeForce RTX 3080 Suprim X

The main body of the cooler continues with the angular shapes similar to previous Frozr coolers, the main colors have changed. The chevrons that sit on both sides of the middle fan are aRGB LEDs and are controlled through the MSI Mystic light application. The card is large and measures in at 336mm x 140 x 61. 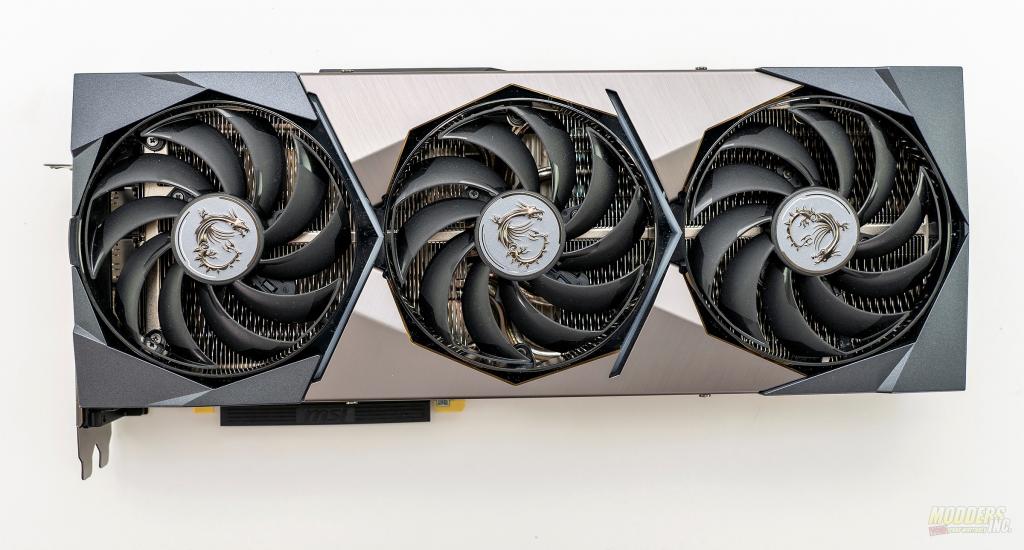 The backplate of the Suprim X has a brushed aluminum look to it and covers the full length of the PCB.

The MSI dragon shield is aRGB and is controlled via the Mystic Light application. 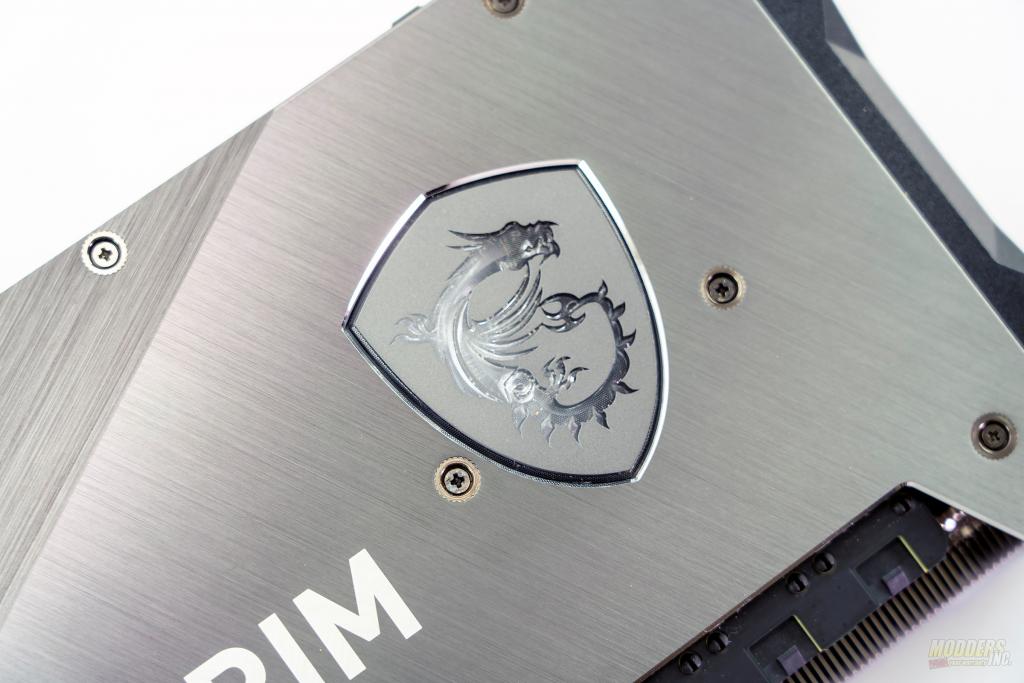 The Suprim X features a switch that allows you to change between a Silent BIOS and a Gaming BIOS. The Gaming BIOS has a slightly higher fan curve to allow for better cooling and slightly better clock speeds than the Silent bios. 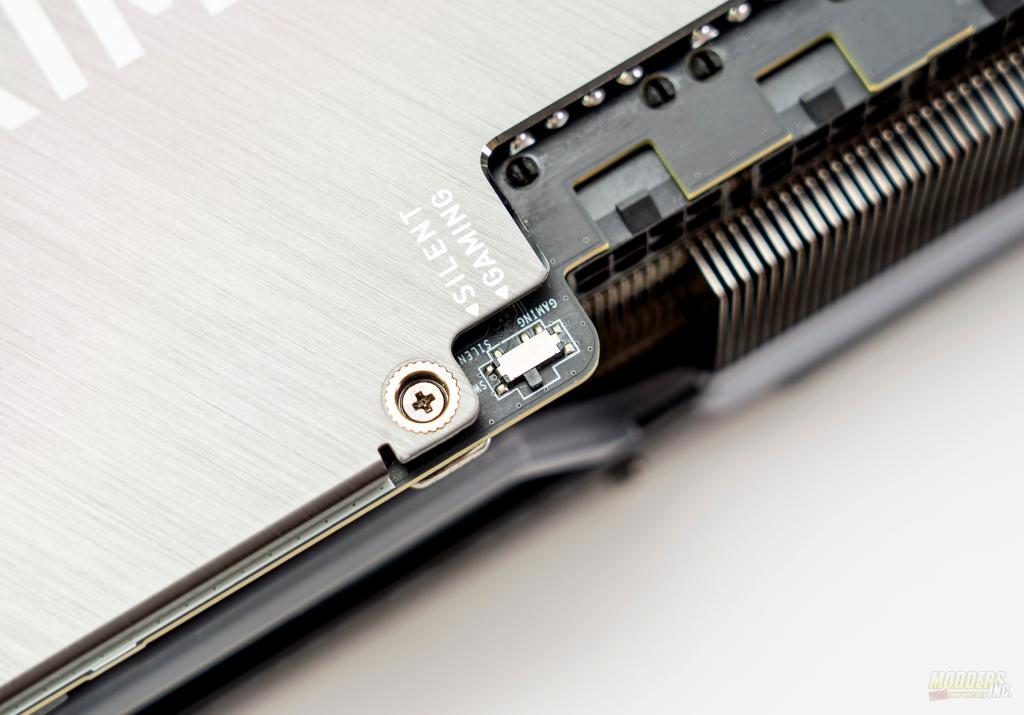 From the “under” side of the card, you can get a clear view of the large heat sink that sits under the fan shroud. The design of the heatsink will exhaust the hot air into the case as the fans blow down from the “top” of the card through the heatsink and exhausts from the sides.

This side of the Suprim X shows more of the heatsink. There’s a small protrusion in the middle of the shroud that clearly displays Suprim and Geforce RTX just in case you forgot. There is aRGB LED lighting that follows the edge of the fan shroud and backlights the SUPRIM text.

The end of the card is finished up nicely with only a little bit of the heat sink showing.

The Suprim X has a total of four outputs. Three DisplayPort 1.4a. While the I/O panel is vented, during my testing there is actually very little airflow coming through the I/O panel. Also, note that the Suprim X is going to take up three slots in the case. MSI chose to only use a 2 slot bracket. In this case, I would have much preferred that MSI used a 3 slot. The card is big and heavy as it is and I would have liked to see more support but, there are few if any cases that support a 3 slot vertical GPU mount. 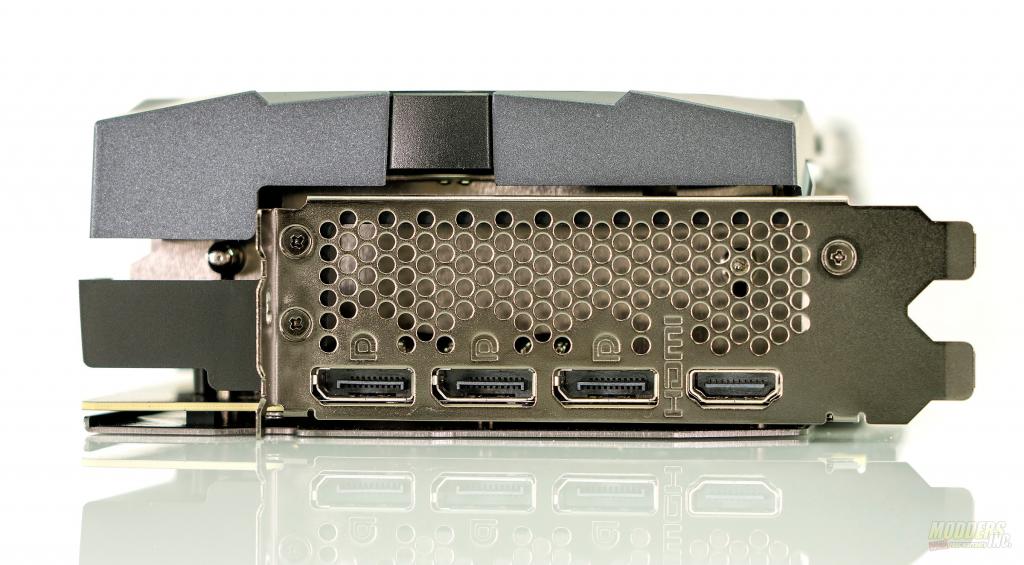 To power the Suprim X, MSI chose to go with three 8-ping connectors and chose not to use Nvidia’s 12-pin connector. MSI also recommends an 850w power supply for the Suprim X. This is higher than the Nvidia recommended 650w. 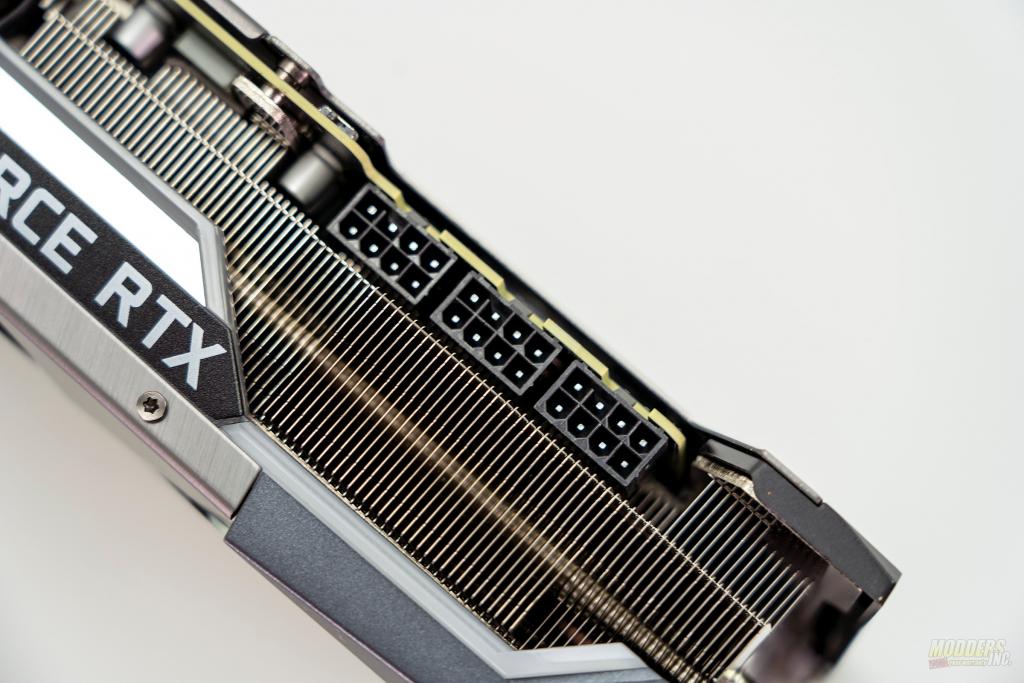 After pulling off the cooler, you’ll be presented with the naked board. AT the heart of the Suprim X is the GA102-200 GPU. One of the things that always amazes me is how much thermal paste is on GPUs. During re-assembly I applied Noctua’s NT-H1 to the GPU core and retested temperatures, and to my surprise, the amount of paste that it came with stock didn’t hurt temperatures nor did applying aftermarket thermal paste help temperatures much as I only saw a two degree drop from 67°C to 65°C under stock frequencies. 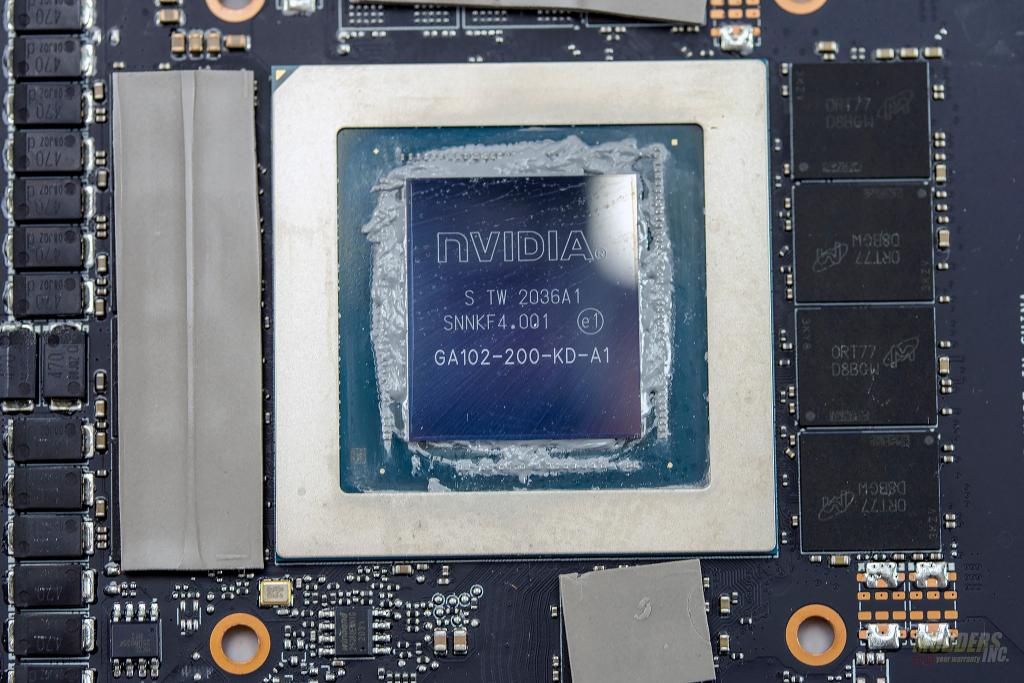 Here is the board layout. I like the fact that the layout is clean. The extra space due to the size of the card afforded MSI the ability to have a nice clean design.

The GDDR6X is manufactured by Micron and has a model number of D8BGW. The memory runs at 1188MHz stock for an effective speed of 19 Gbps. 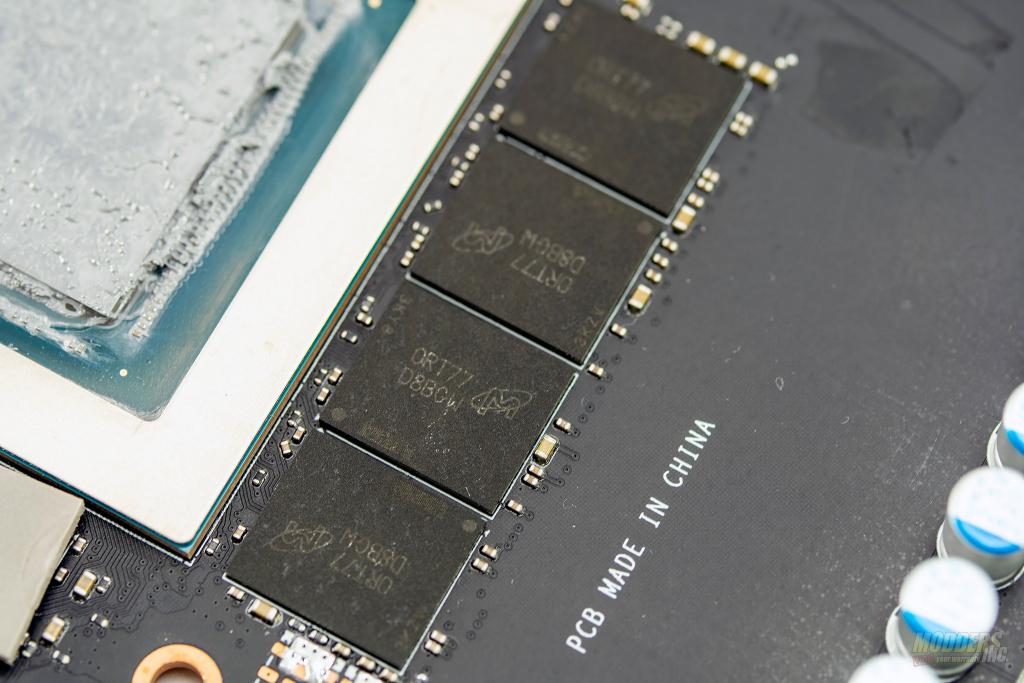 Keeping everything cool, is the massive cooler that sits on top of everything. VRM and memory cooling is provided by the pads that are shown above on a few of the memory modules and below on the heatsink. The Suprim X uses heat pipes to transfer heat from the components to the fins. 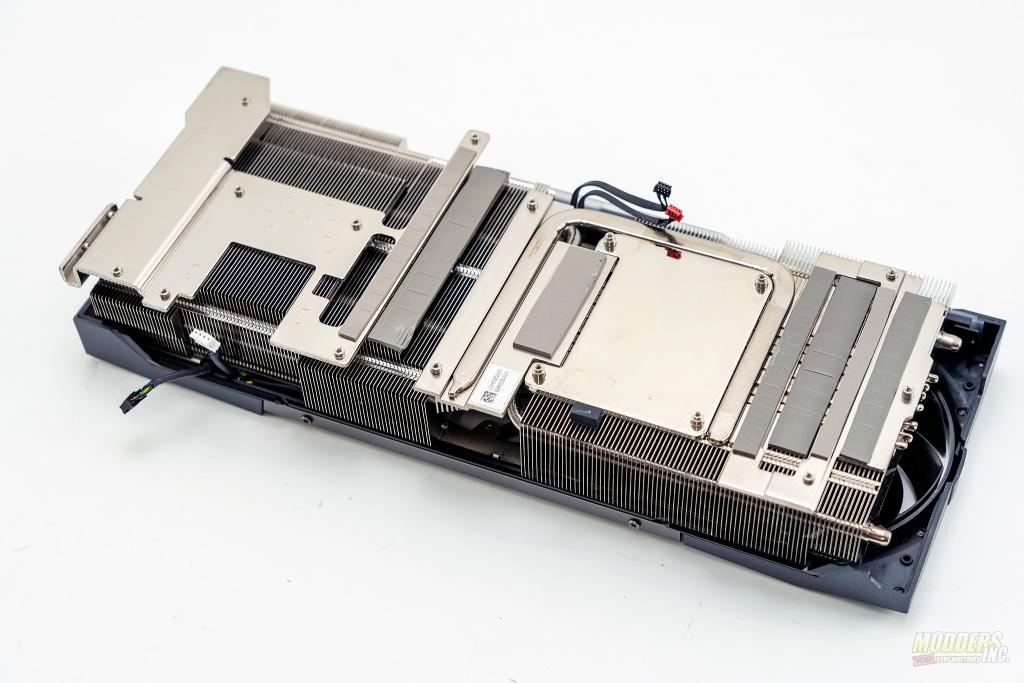