A Closer Look at the MSI MPG B550 Gaming Carbon WIFI

The MSI B550 Gaming Carbon WIFI is a standard ATX board meaning that it measures at 12in x 9.6 inches. The motherboard features two aluminum heatsinks over the VRM for the CPU. A plastic cover accompanies the left heatsink and provides a cover to the top of the I/O panel. Two aluminum heatsinks are included for the M.2 SSDs below as well as an aluminum heat for the chipset. Unlike the X570 chipsets, the B550 doesn’t require active cooling and thus doesn’t contribute to the overall noise level of the PC.

The area around the CPU socket is fairly clear and there shouldn’t be any components on the board that will interfere with a CPU cooler installation. MSI uses a stepped style heatsink for the VRM cooling so, the parts of the heatsink that are closest to the CPU socket are still low enough that most CPU coolers on the market should fit without an issue. However, always check beforehand just in case. 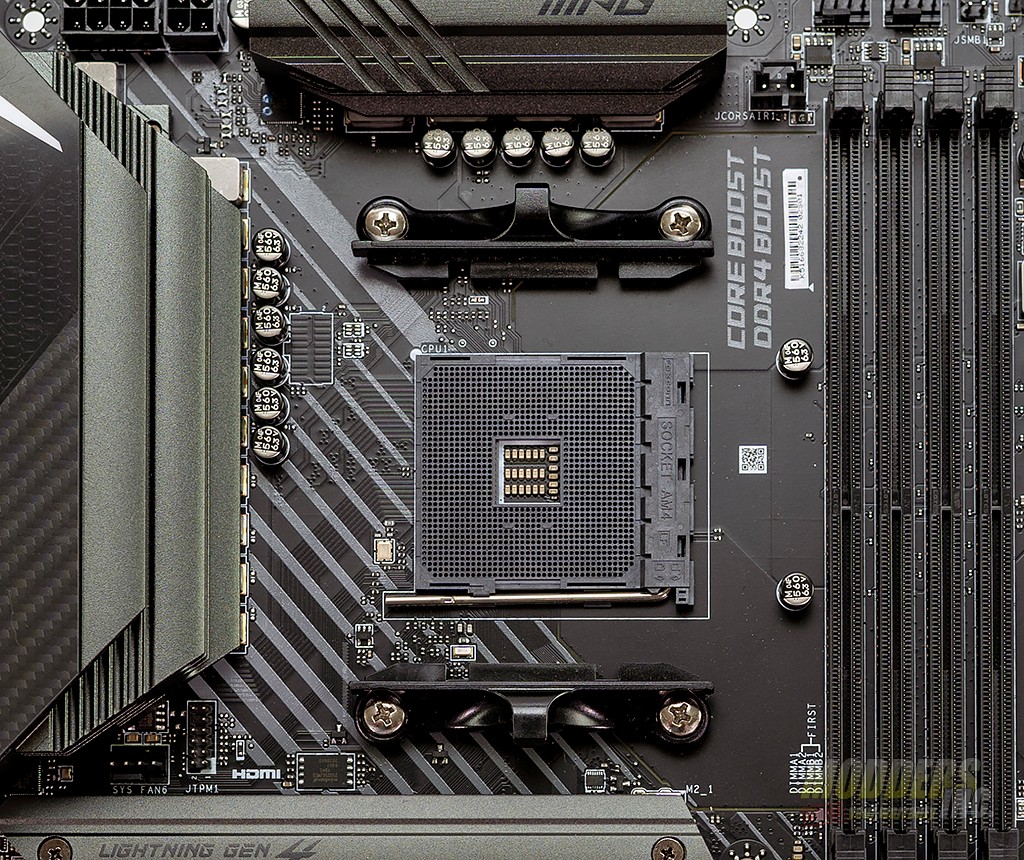 Power to the CPU is delivered at the top edge connector in an 8+4-pin configuration. Not all the pins have to be used, in this review, I only used the 8-pin connector with no issues. 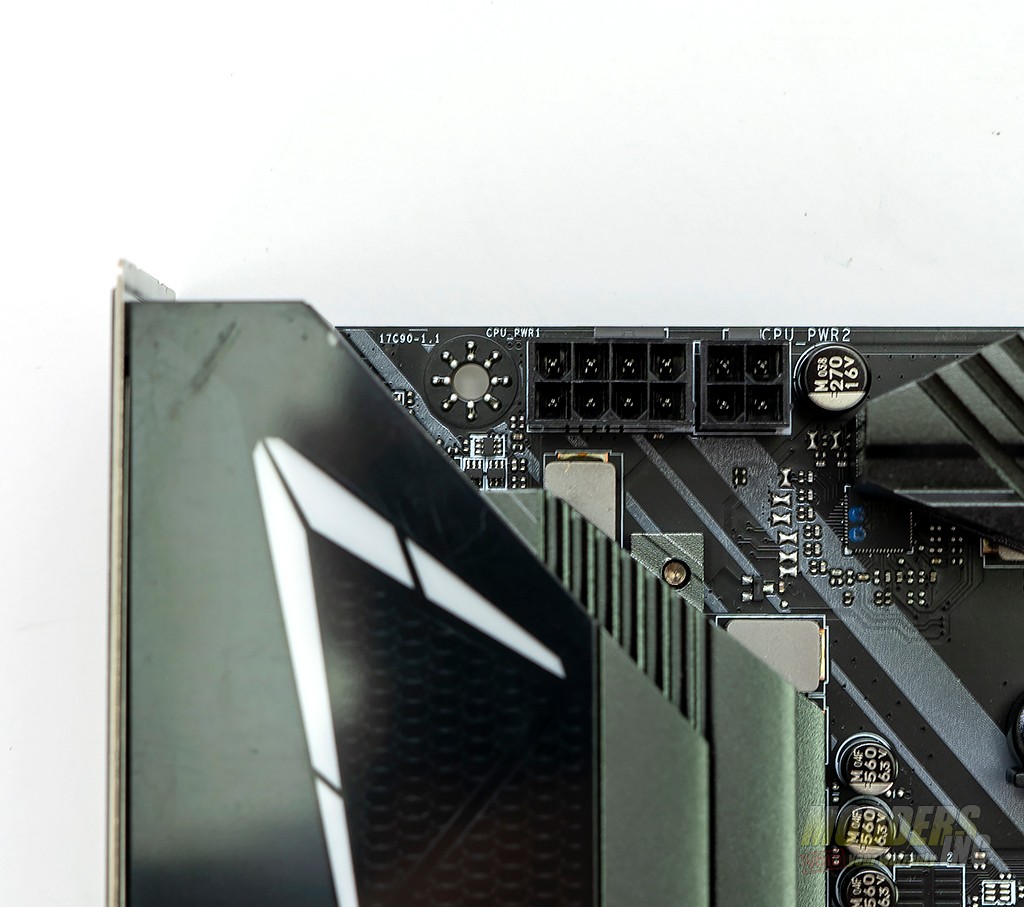 The B550 Gaming Carbon WIFI has four memory slots and supports up to 5100 MHz DDR4 modules. Along the top edge of the board, there are two 4-pin headers for the CPU cooler or a water pump. Next is a 3-pin aRGB header. Moving around the right edge of the board, there are two more fan headers, the 24-pin ATX power, and a USB C case front panel connector. 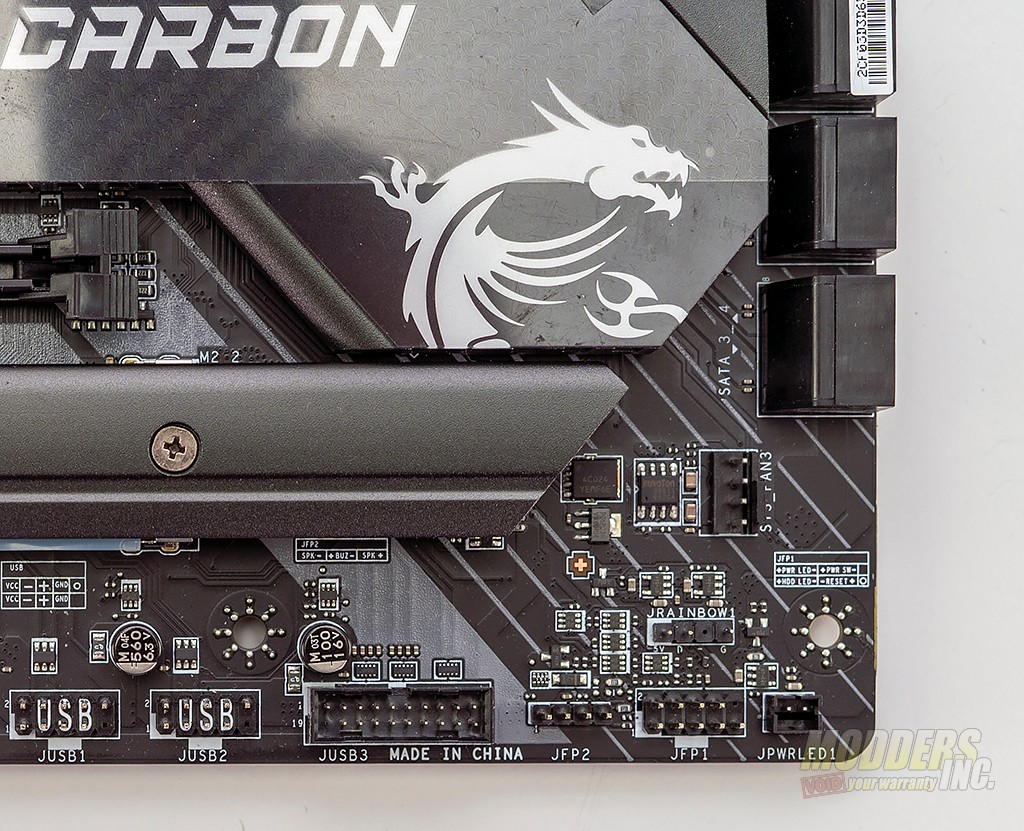 As we finish the tour around the edge of the board there is another 4-pin fan header, a LED control switch, a clear CMOS button, a fifth fan header, temperature sensor headers, a 4-pin RGB lighting header, and the front panel audio header. 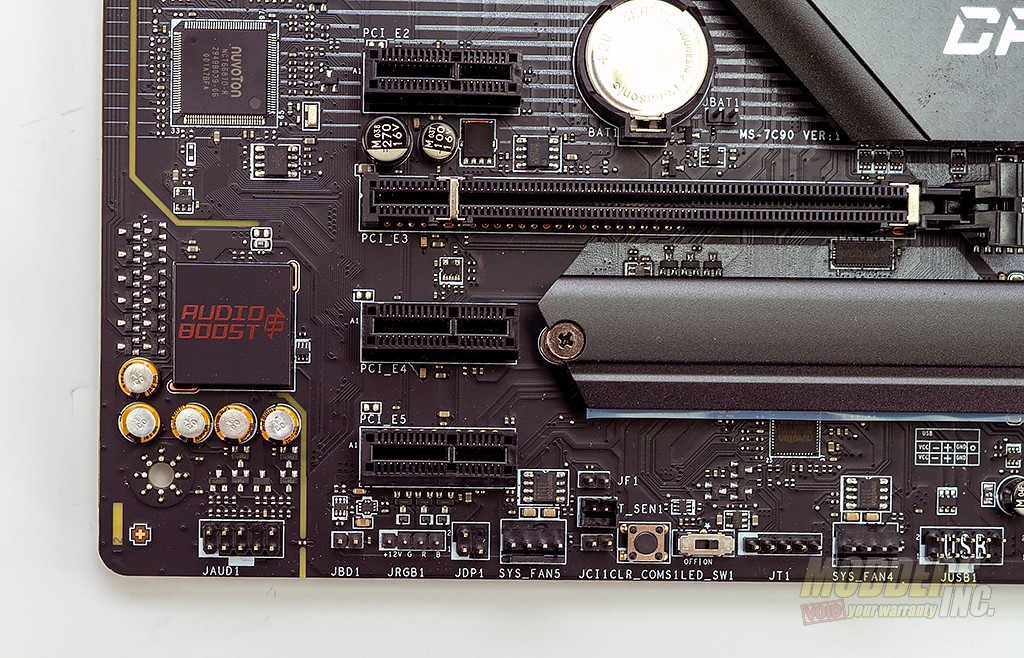 In the middle of the B550 Gaming Carbon WIFI, you’ll find the PCIe slots. There are two X16 slots. The top slot operates at x16 speeds whereas the bottom slot only operates at x4. Intermixed with the X16 slots are 3 PCIe x1 slots. At the top of the PCIe slots is an aluminum heatsink that cools the 1st M.2 slot. This slot supports PCIe 4.0 x4. The lower heatsink covers the second M.2 slot and supports PCIe 3.0 x4 and comes from the B550 chipset. Finally, a carbon fiber wrapped accent piece with the MSI dragon is attached to the aluminum heatsink for cooling the B550 chipset. 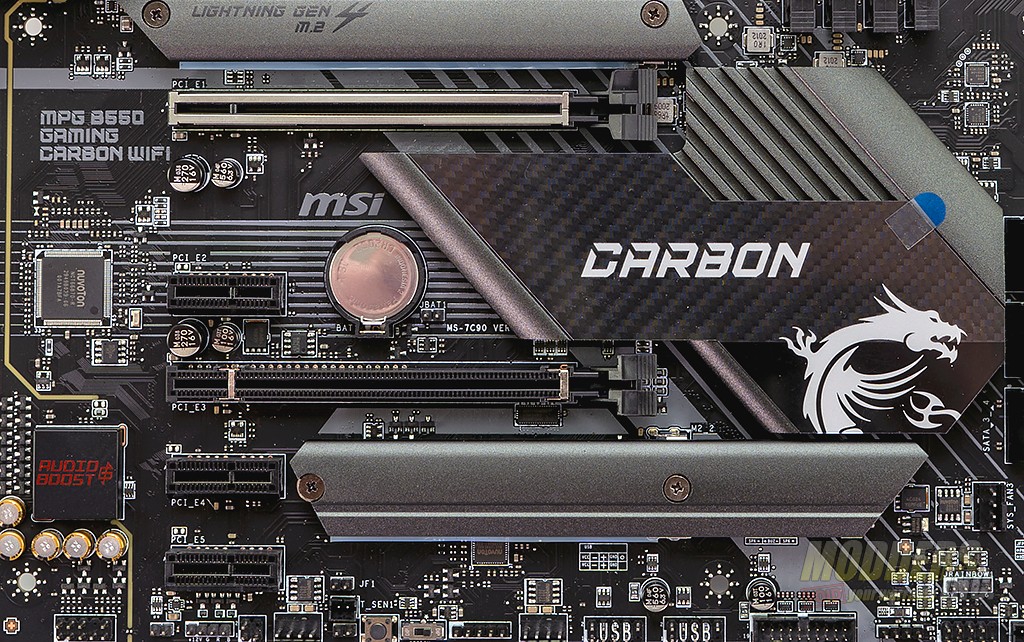 The I/O panel features a DisplayPort, an HDMI port, a flash BIOS button, a PS/2 port with 2 USB 2.0 port under it. Next up there are two additional USB 2.0 ports with dual USB 3.1 Gen 1 ports under them. Wired network connectivity is provided by a 2.5 gigabit per second RJ45 connection and an additional USB 3.1 Gen 1 in red and a USB C connector. Antenna mounts are provided for the included wireless card. One digital optical out and 5 3.5mm jacks are provided for the audio solution.