A Closer Look at the Sapphire Pulse RX 5700 XT 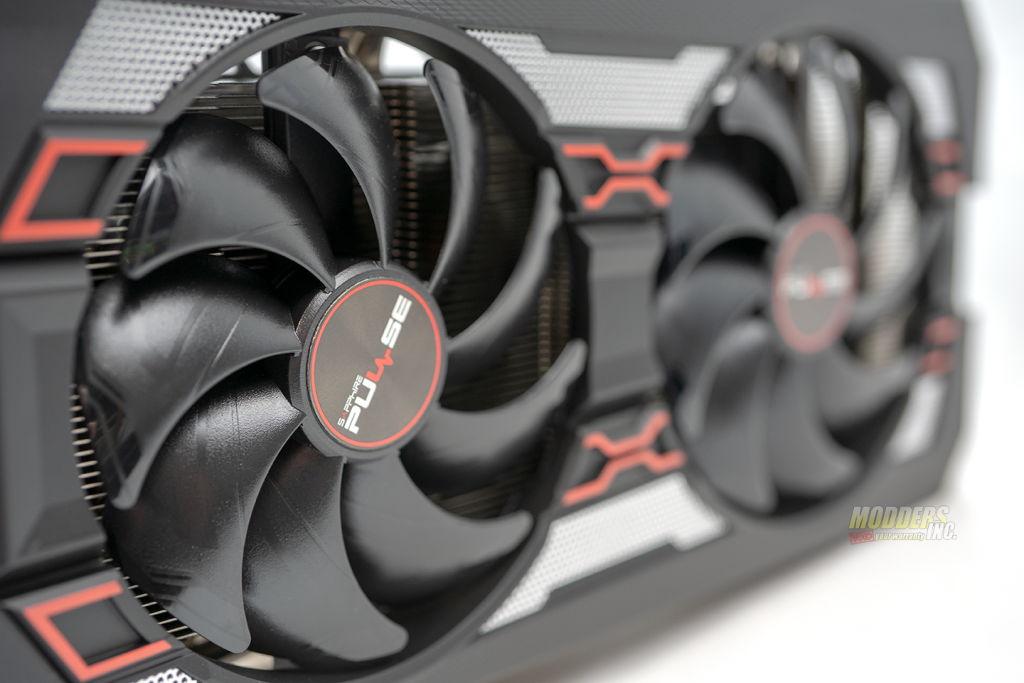 The Sapphire Pulse RX 5700 XT is a dual fan card with two 90 mm fans each with 9 blades. Each blade has grooves on them to help direct the airflow in a specific direction. The blade design allows the fans to run about 10% quieter. Each fan has two ball bearings. Dual ball bearing fans have about an 85% longer lifespan when compared to traditional sleeve bearing fans.  I very much like the silver mesh design on the front of the card. It’s reminiscent of the EVGA GTX 1080 FTW.

At the very front of the card is the I/O bracket. The I/O is a more traditional I/O and consists of three DisplayPort 1.4 ports and a single HDMI 2.1 port. The HDMI port can output a max resolution of 4096 x 2160@ 60 HZ. Each DisplayPort 1.4 port can output a max resolution of 5120 x 2880 also @ 60 Hz.  The four ports are in one straight line and above, the bracket is vented to allow for better airflow. On the opposite end of the card, the shroud that covers the cooler is open-ended to again, allow for better airflow.

Like all other cards, the bottom edge has the standard PCIe express connector. However, unlike most other cards, the Sapphire Pulse Radeon RX 5700 XT is a PCIe 4.0 card as opposed to PCIe 3.0 like previous generation AMD and Nvidia cards. Looking along the bottom of the card, you can see some of the heat pipes that make up part of the cooler on the Pulse RX 5700 XT. To the far right, you can see the there is a small 4-pin LED header for the LED lights on the side of the shroud.

On the top edge, we find the Sapphire logo that is illuminated by the LED lights behind the logo.  to the right of the logo, you see the rest of the heat pipes that run through the fins on the cooler. The longest heat pipe on this side of the card wraps in front of the 8-pin and 6-pin power connectors that power the card from the power supply.