It should be said that with most certainty, that all of us at some point looked at the cheapest PSU when building our systems. Dropping months of savings on every component but when it came to the PSU, it was banished to the “bargain bin” option in your parts list. Even I, somehow that can be a bit of a PSU snob is guilty of this mentality during my early years.

While we don’t currently have the tools to measure the ripple and stability of PSUs, we can most certainly talk about the aspects of trends and design features of PSUs. Cooler Master was kind enough to send us the 750-watt models in both modular and non-modular flavors of their MWE series PSUs.

So what does “Modular” mean?

Modular PSUs are nothing new, they have been around for 10+ years, and simply means the cables can be removed and added as the user pleases. There is a Hybrid modular as well, where accessory cables can be removed but the main cables are hardwired to the board of the PSU. In the early days, the enthusiast would sneer at the idea of using a modular PSU due to the potential of power loss between the board of the PSU and break where the cables could be removed. While this was true to an extent, this was only an issue for extreme users that would push the limits of their PSU wattage capacity. This mentality trickled down to the general PC building population which made the adoption of fully modular PSUs slow.

What really drove the adoption of the fully modular market was the growth of the SFF community, long were the days of taking your mega tower to your local LAN party, instead, people wanted smaller PCs (Fragbox) as made popular by Falcon Northwest. With the small footprint of these chassis, having a bundle of wires tucked just was not an option and users would opt for a hybrid or fully modular PSU. 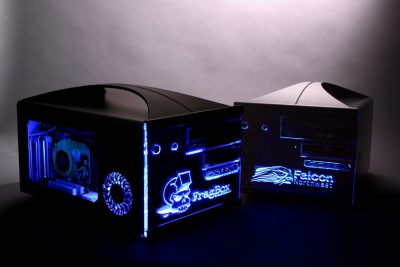