Introducing #ExpertMode, a 6-episode look at extreme PC’s and the passionate artists who build them. The first Intel #ExpertMode episode features PC modder Travis Jank from NerdyNinjas who invites us into his Idaho  workshop to see a freezing cold computer that utilizes two separate window air conditioning units modified to fit into his case to overclock his PC. Travis calls this the Refrigerator Rig. This style of super cooling, known as Phase Changing, has been around for many years, but never really caught on for a daily PC due to the expense and noise. Watch the first Intel #ExpertMode episode as Travis takes us through the creation of this impressive rig.

The second episode of #ExpertMode is now online featuring Bob Stewart and Rod Rosenberg of BSMods with their Fallout 4 case mod which won Corsair’s recent casemodding competition. The guys talk about what went into building the impressive themed-build and shows how sometimes, inspiration (and materials) comes from the unlikeliest of places. 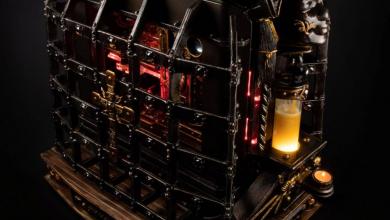 July 17, 2020
Get Your Shirt NOW before they are all Gone!
Guest Contributors Wanted
Join Our Discord!
Case Mod Gallery