Tom Clancy’s Ghost Recon Wildlands is a tactical shooter game set in an open world environment and played from a third-person perspective with an optional first-person view for gun aiming. Players play as members of the Delta Company, First Battalion, 5th Special Forces Group, also known as “Ghosts”, a fictional elite special operations unit of the United States Army under the Joint Special Operations Command. The game can be played as a single player experience or you can invite up to 3 of your friends to fill out your squad.

Battlefield V is a first-person shooter video game developed by EA DICE and published by Electronic Arts. Battlefield V is the sixteenth installment in the Battlefield series. Battlefield V features a limited single-player campaign in the form of War Stories, the rest of the missions and adventures are online multiplayer.  For this specific test, I did not have DXR or DLSS turned on.

Battlefield V is a game that I find myself playing quite a bit. They’ve added a few features since launch. DLSS and RTX are both implemented but not tested here. In 1080, the RTX 2060 averaged 106 frames per second, in 1440 the average was 60 FPS, and in 4K it barely reached 30 FPS on average.

Final Fantasy XV is an action role-playing game developed and published by Square Enix as part of the long-running Final Fantasy series. It was released for the PlayStation 4 and Xbox One in 2016, and for Microsoft Windows in 2018. The game features an open world environment and action-based battle system, incorporating quick-switching weapons, elemental magic, and other features such as vehicle travel and camping. Final Fantasy XV was the first production game to feature DLSS.  The test results below are with DLSS off.

At launch, the 20 series GPUs boasted the ability to do real-time raytracing and use a new feature called DLSS or Deep Learning Super Sampling, however, at that time there were no games out that supported either of those features. Without being able to test those features, I think the 20 series got off to a rocky start. Fast forward to Novemberish 2018; Windows 10 1803 update was finally released that enabled the ray tracing libraries in DX12. With that, Nvidia released a new set of drivers and EA/Dice released the 1st patch for BattleField V however, the patch wasn’t without issues and performance were at least halved as compared to non-DXR tests. EA/Dice have now released a new patch that performs quite a bit better. However, there is still a performance penalty for enabling DXR in Battlefield V.

For the DXR testing in Battlefield V, I chose to use 1080p as the resolution and the base graphics settings to Ultra. DXR was set to Low, Medium, and Ultra. I also included the results with DXR off as well. 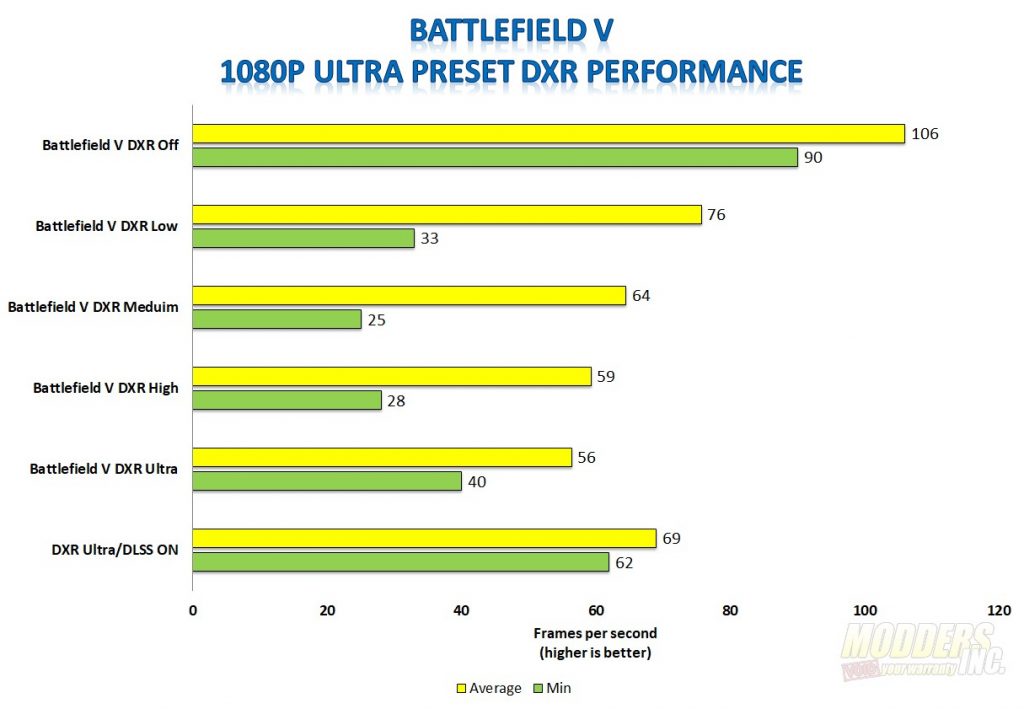 Let’s exclude the last result for a moment.  With raytracing turned on, we know we get a performance hit. At low and medium settings, it’s really not too bad. Cranking that up to high and ultra and we see a 50% hit in performance compared to the scores with it off. This isn’t new. It’s pretty much been a 50% hit in performance since they patched it. Adding DLSS into the mix, however, brings the average back up a bit. With DXR set to ultra and DLSS on, I was able to average 60 FPS. However, there’s a cost. At the time of my testing, the DLSS enabled image quality was a bit softer than without. I expect as the Nvidia AI gets better trained, the image quality should be sharper and less soft than what I saw in my testing.

Final Fantasy XV leverages Nvidia’s Tensor cores on the RTX 20 series cards. It works by basically rendering at a lower target resolution then, sends the frame to the Tensor Cores and the Deep Learning network to get upscaled and the “AI” fills in the information for the anti-aliasing. DLSS is only available in 4K. For this test, I chose to run the beginning missions around Hammerhead and occasionally heading back to the gas station. 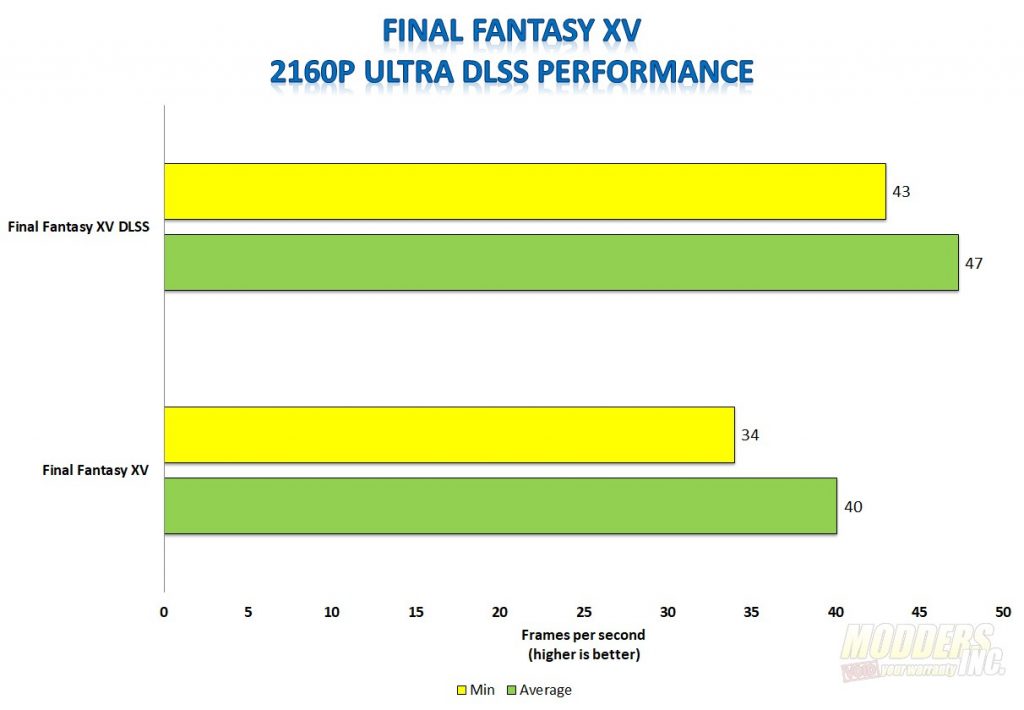 Final Fantasy XV was one of the 1st games to support DLSS. In this game, DLSS is only available at 4k no matter what GPU you’re using. DLSS does give a nice bump to performance as FPS did go up although, slightly.