The X60 series of cards for a long time represented the lower end of the graphics card scale. The same holds true with the RTX 2060. The GPU is great for 1080p gaming. In my testing, it never dropped below 60 FPS while benchmarking or playing in games over a little while. Even at 1440p, this card holds up well. Performance is as expected when compared to the previous generation. I no longer have a GTX 1060 (or any Radeon cards for that matter)around so I chose to test against the only two Pascal cards I have; and EVGA GTX 1070 TI and a Zotac GTX 1080 mini. The MSI RTX 2060 performed well when compared to the previous gen 1070/1080 and performed very close to my expectations when comparing against its higher-end siblings. At this point in time, I don’t really see the point of buying a 1060/1070 card when the 2060 gives the same or better performance and even gets close to the GTX 1080 performance from time to time. Playing at 1080p max settings is this cards jam!

The industrial look of this card and the lack of LED lighting I really like. I’m a big fan of black/silver for most builds and if you’re trying to keep a subdued theme, this card should work pretty well. Not everything needs LED lights and some would say even less need RGB lighting. However, I was disappointed in the fact the backplate was not metal, however, unlike the other RTX cards that I’ve reviewed, there wasn’t any heat transfer to the rear of the card. During a 45 minute loop of Timespy, I reached over to touch the backplate and it felt “cool” to the touch unlike touching the backplate of the RTX 2080 FE. 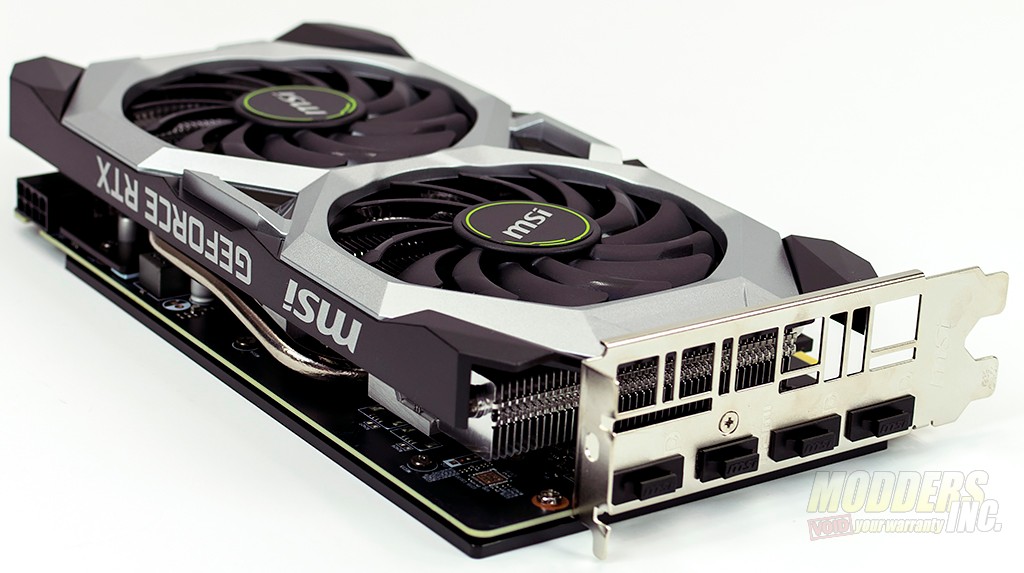 MSI clocks the GeForce RTX 2060 Ventus at 1710 MHz up from 1680 MHz from the FE edition reference cards. I was able to push it even further hitting 1850 MHz all while still keeping the card under 83°C at 100% fan speed. Realistically, I was able to leave the fans set to auto in MSI’s Afterburner software and still get to 1800 MHz and not have the fans spinning at max. At that speed, the fans were audible on the open test bench that I use but we not annoying at all. There’s not really a distinctive pitch to the fan noise, just more of it. Memory overclocking on this GPU was another story. With all the other RTX cards that I’ve reviewed, I was easily able to push the memory speeds by +1000 MHz. With the MSI RTX 2060 Ventus, I was only able to eke out a meager 150 MHz overclock on the memory. At 151 MHz and on different boards, power supplies, etc., it would artifact and crash after roughly 5 minutes into any gaming session. Even then, at stock speeds, it’s a good card, it’s just really not meant to be pushed any further than MSI has already pushed it.

There are two versions of the RTX 2060 Ventus, one is the OC model, which is reviewed here, and the other is the non-OC version. The boost speed on the non-OC version is the same as the reference cards at 1680 MHz.

The pricing of the RTX cards has struck a chord with consumers and not in a positive way. Most complaints are they are more expensive than the typical generational gap. The 2060 series does a bit to narrow that gap a bit. At $100 more than the launch price of the 1060, the MSI GeForce RTX 2060 Ventus OC sits at around $350.00 at the time of this writing. The extra cost is due to the extra silicon onboard in the way of the tensor and Nvidia’s DLSS technology. While at launch, I wasn’t really thrilled with the fact that we didn’t really have any RTX or DLSS enabled games available, I’ve come to use it quite often on the games that do, especially in games that are single player. Multiplayer games and especially first-person shooters, I want as many frames per second as I can get.  While overclocking wasn’t all that great, I think the MSI GeForce RTX 2060 Ventus is a great card. Out of the box performance in 1080p is great and even good at 1440. Dialing down the graphics quality settings a bit will gain more performance too. Combining RTX/DLSS with a G-Sync or G-Sync compatible monitor makes the game look great and hitting a consistent frame rate is the icing on the cake.

Want to see more about MSI Products we have reviewed