QNAP also sent over a QSW-1105-T Switch. This is an unmanaged 5-port 2.5g switch. There’s no setup, just plug in and go. QNAP keeps with plain packaging with a little bit of information about the switch inside. 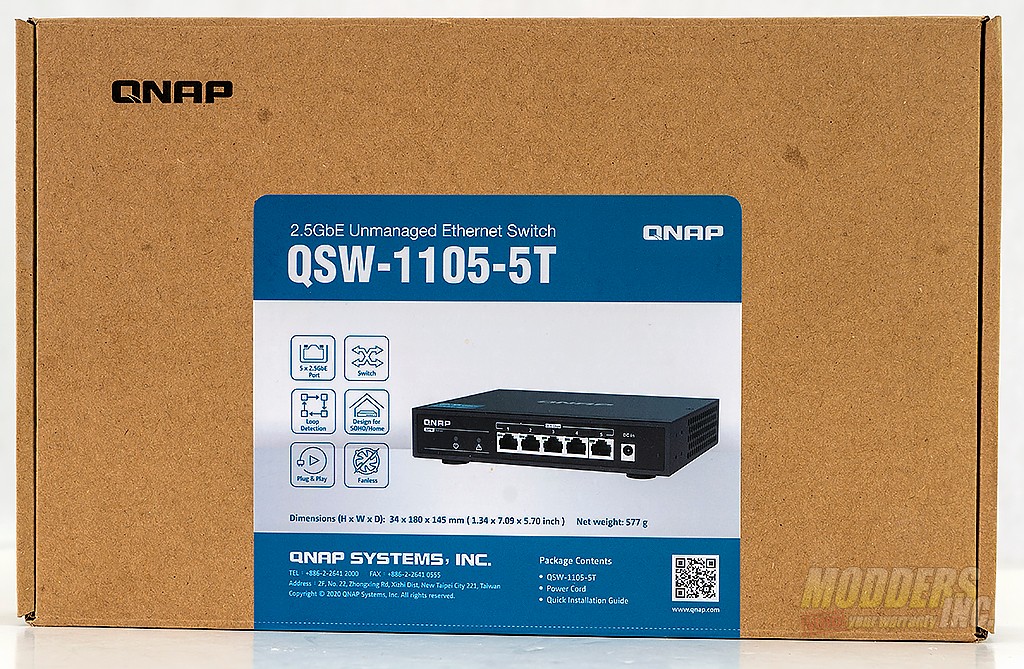 As I mentioned earlier, this switch is 5 ports and all 5 ports support up to 2.5 Gbps speeds. The switch body is all metal. The included power supply plugs in at the front. Personally, I’d rather have it in the back but it works so, I really have no complaints. The switch reminds me of the small 5-8 port Netgear switches that we used to buy in the late ’90s and early 2000’s with the all-metal construction on the switch housing.

To test the TS-253D, I used a single client. This was a fresh build of Windows 10 with the latest updates and drivers. The client and the QNAP TS-253D were plugged into the QSW-1105-T and were not connected to the internet. Each device was configured with a static IP address. I waited until all RAID synchronization was complete before running each of the tests. Intel’s NAS Performance test was used to measure the performance of the TS-253D. Both SSDs and mechanical hard drives were tested in the TS-253D in both RAID 1 & RAID 0.

First, let’s take a look at SSD performance. The SSDs I chose to use is a pair of Samsung 860 EVO 1 TB drives. The SSDs didn’t show much difference between RAID 1 and RAID 0 performance throughout the tests. 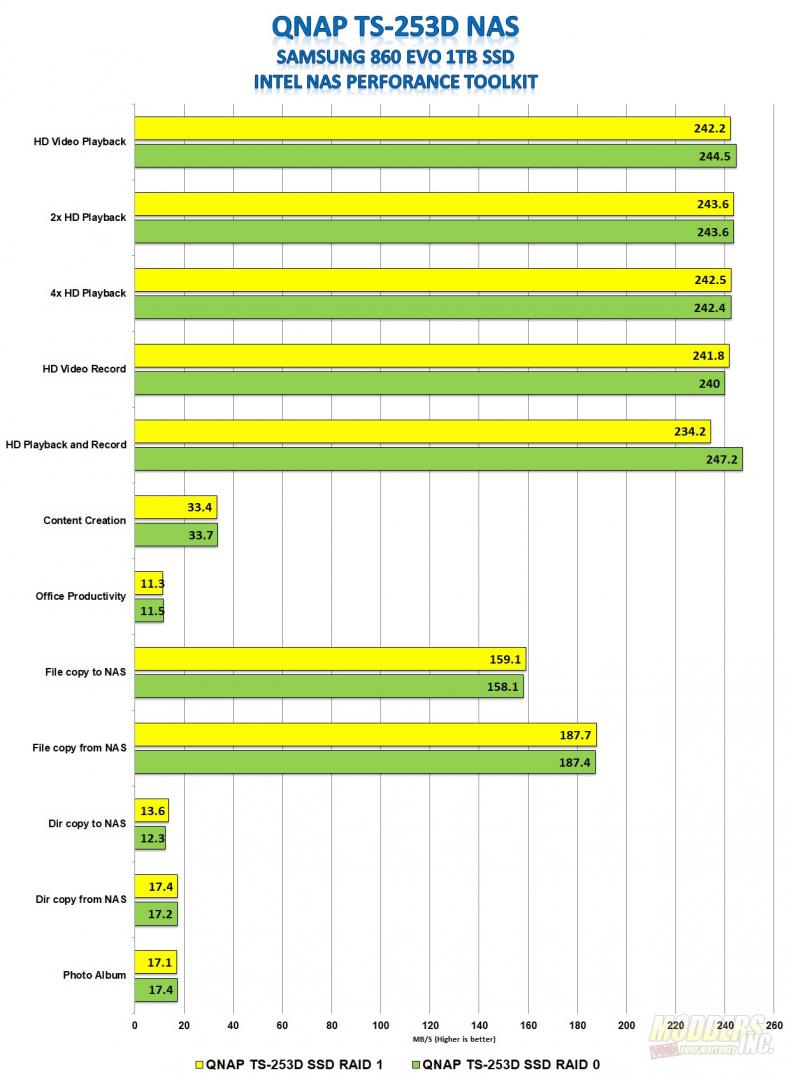 Next up are the mechanical hard drives. I chose a pair of Seagate Ironwolf NAS drives with a capacity of 4 TB each. 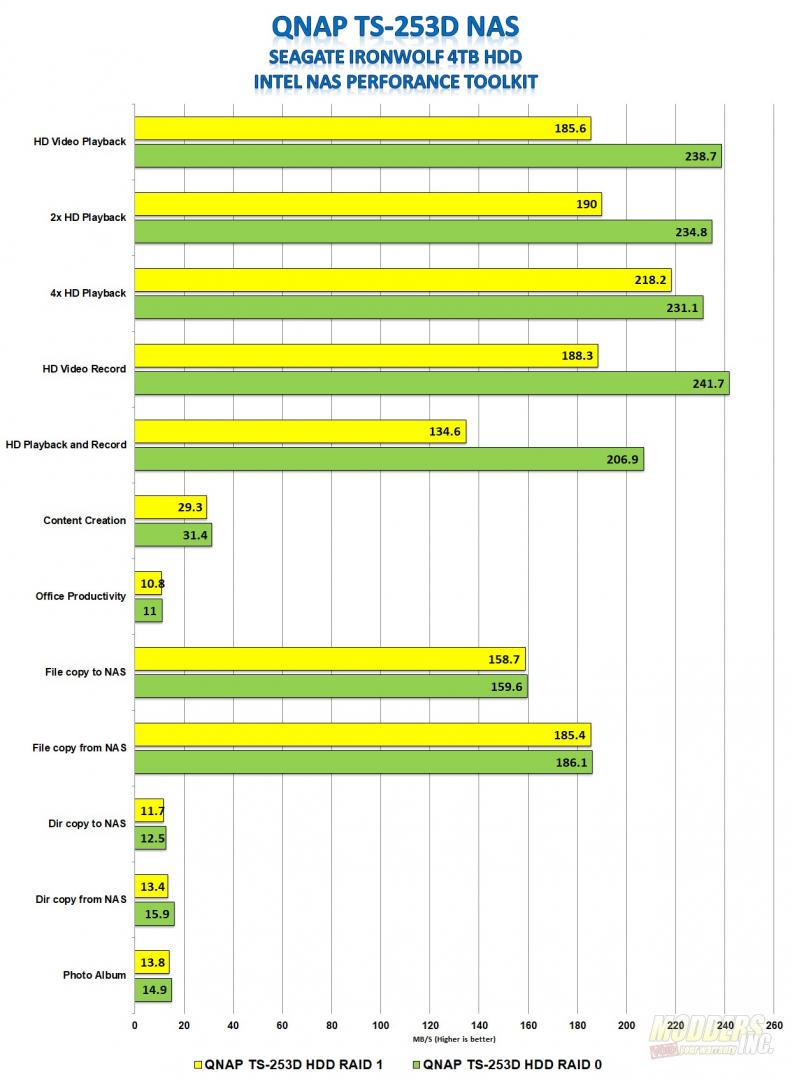 Take note the results are in MB/s or Megabytes per second.

The SSDs pretty much maxed out the network connection during the video tests. A single 2.5 Gigabit connection has a maximum theoretical bandwidth of 312.5 MB/s. The video tests on the SSDs were around the 240 MB/s mark or around 1.92 gigabits per second. With the hard drives in RAID 0, they pretty much matched the SSDs in the video tests and came in around the 240 MB/s transfer rate. When we put the drives in RAID 1, we see a significant difference between the two RAID levels and RAID 1 comes in between 130 MB/s and 220 MB/s (1.04 GB/s to 1.76 GB/s)

As we move down the tests, things do slow down a bit as more stress is put on the NAS. This is seen on both SSDs and the hard drive tests. However, I want to point out the file copy tests. There is virtually no difference between the two drive/RAID configurations.  In all cases, the transfer rate was around 160 MB/s (1.28 GB/s) when we write to the NAS and 185MB/s (1.48 GB/s) when we’re reading from the NAS. To test this outside of the Intel NAS tests, I copied a 10GB file to and from the NAS in all drive configurations and was able to replicate the results.