For the Thermal testing, I will be using a stock AMD CPU cooler, the Ultra X-Wind 120mm Copper CPU cooler, and the Noctua NH-U12F cooler as comparisons. All coolers have been tested on the same hardware. I will record the Idle and Load temperatures for each of the coolers. Each cooler is tested multiple times over a couple day span to make sure the figures are accurate. Once that is done, I will average out the Idle and Load temperatures for the graphs. 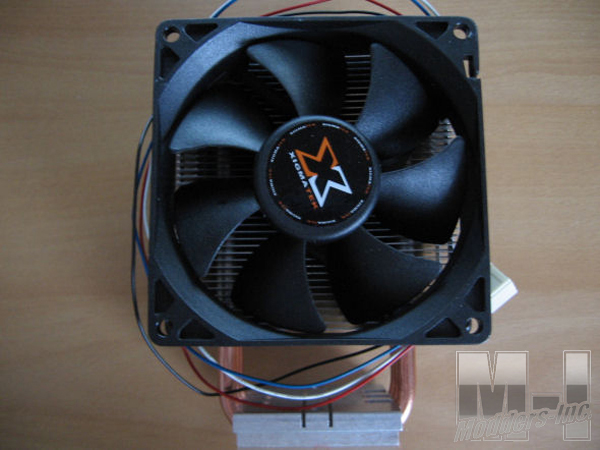 The above picture shows a straight on view of the Xigmatek HDT-S963 cooler. I’m comparing the Xigmatek HDT-S963 against a couple of coolers that I know perform nicely on this specific configuration. The only thing that normally changes on this configuration is the chassis. The coolers are tested at different times and do vary a little bit in ambient room temperature. This is why I list the ambient temps at the time the tests where performed.
Looking at the CPU temperature graph, we can see that the Xigmatek HDT-S963 was able to achieve the second lowest idle temperature (35C) of the four coolers used. On the load side we see it in second place at 44C. Keep in mind that the X-Wind and the Noctua coolers are both using 120mm fans for their cooling, while the Xigmatek HDT-S963 is using a 92mm fan. The HDT-S963’s fan runs in the range of 1200 – 2800 RPMs and has an air flow of 39 – 54.6 CFMs. At full load the fan is audible, but this is the only semi-high RPM fan that I have installed in this configuration. If I had my XFX 7900GT installed, its fan would easily drown out the noise of the HDT-S963.
Looking at the second graph we are showing the motherboard temperatures. The Xigmatek HDT-S963 ties for the lowest idle temps at 21C and comes in at a respectable second with a load of 26C. The addition of the deflector to help cool the surrounding CPU components does make a difference.
Advertisement
« Page 3
Previous page 1 2 3 4
DT Carel Send an email Last Updated: December 27, 2013
Facebook Twitter LinkedIn Tumblr Pinterest Reddit WhatsApp Telegram