AMD is really taking the fight to the mid-range market. From a business standpoint, this makes perfect sense. Release a product where most consumers purchase. Past offerings from AMD didn’t compete as well as we had hoped against offerings from Nvidia. All throughout my testing, the new NAVI GPUs were extremely competitive with the offerings in the mid-range from Nvidia. For the most part, the Radeon RX5700 competes with the GeForce RTX 2060 in the games we test. In a few, it beats the 2060, in a few, it loses to the 2060 but overall very competitive. The RX5700XT is slightly faster than the GeForce RTX 2070 in most games and plants itself between the GeForce RTX 2070 and the GeForce RTX 2080. The Radeon GPUs take advantage of the optimizations in games such as FarCry 5 and Deus Ex: Mankind Divided and really suffer performance penalties in Final Fantasy XV. I’d expect as drivers mature, performance will increase even further, as we’ve seen in the past.

However, and while I don’t have any to test, it would be amiss not to mention the new Super RTX cards from Nvidia. The simple fact is that Nvidia has recently released faster versions of their GeForce RTX 2060 and GeForce RTX 2070 GPUs with an even faster GeForce RTX 2080 on the way. I cannot really speak to the performance differences between the Super, non-Super, and the new Radeon cards as I don’t have them to test with. To combat the new Super cards, AMD recently revealed price cuts for the entire line up of Navi GPUs. The Radeon RX5700XT 50th Anniversary Edition drops to $449 USD, the Radeon RX5700XT to $399 USD and the Radeon RX5700 to $349 USD. 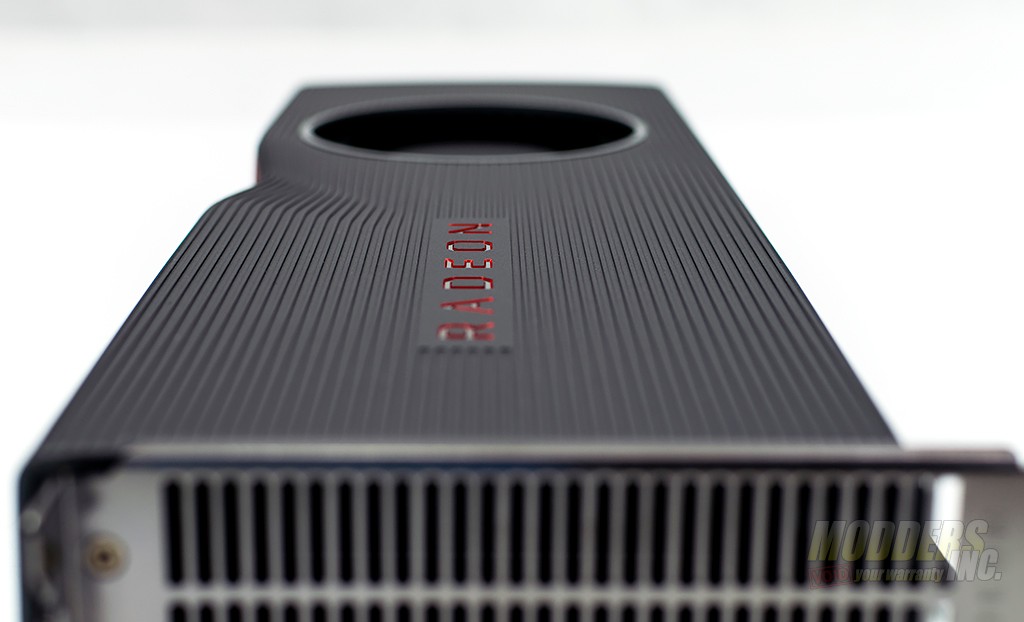 Performance is one thing but what about the heat and noise generated by reference cards. Let’s be honest, blower-style coolers just need to go away. They work but just barely. With that, testing on both the Radeon cards was surprisingly quiet.  I test on an open test bench and with the cards running benchmarks, I could not hear them running from a few feet away. I ran a 30-minute loop of Haven to measure temperatures, clocks, and fan speeds. At their stock settings, these cards run warm as the fans never spun up above 3000RPM. I will say that cranking the fan speeds up to 100% and these cards get extremely loud. So much so that after about 5 minutes it became very annoying to me and I set them back to auto. 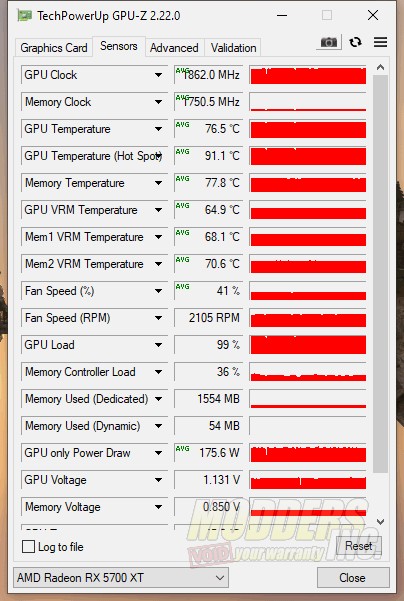 Above is the monitoring screenshot I took while looping Haven. This spans 30 minutes and I reset it as soon as the benchmark started putting stress on the card. The goal was to get an average reading from the sensors. As you can see the GPU clock averaged above the 1755 MHz Game clock at 1862.0 MHz. The GPU was running full tilt out of the box. The average GPU temperature was 76.5°C during this session with a fan speed of 41%. At the end of the test, I stuck my thermocouple at the exhaust of the card and it measured 61°C. Memory temperature was up there as well at 89.2°C average over 30 minutes. The shroud temperature reached 45.2°C and the backplate reached 58.9°C in the hottest spot around the back of the GPU die. Room temperature was 23°C. 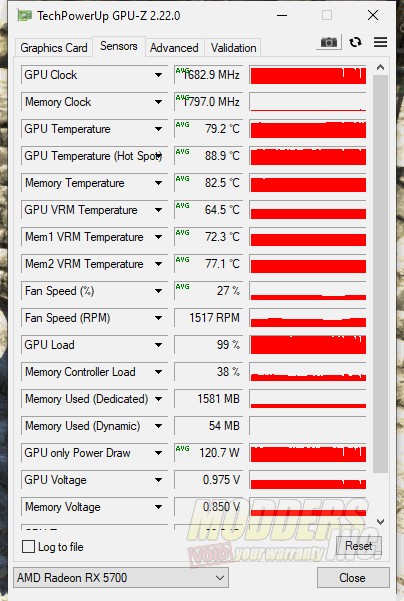 The GPUZ screenshot above was taken during the 30-minute loop of Haven just like the 5700XT. Again, this was taken during a 30-minute span while Haven was looping and reset once the benchmark started putting a load on the GPU. Over the course of 30 minutes, the average GPU clock was 1682.9 MHz which is just above the game clock of 1465. On occasion, I did see the clock reach speeds of over 1700MHz.  GPU temperature averaged 79.2°C and memory temperatures averaged 88.9°C. Fan speeds were 29% on average. Exhaust temperature was measured at the end of the run and measured 58°C in a 23°C room temp. One thing to note is the shroud of the RX5700 gets hot. I measured with both a surface mount probe measured a temperature of  50.5°C.

The architectural changes AMD made to the Navi GPUs show real progress. Both the Radeon RX5700XT and the Radeon RX5700 compete in the mid-range segment very well. Granted, they do not have features such as hardware-accelerated Ray-tracing but I think the next version of Navi will have some form of it. Granted, there are still only a few games out that support Ray-tracing with more and more on the way in the coming weeks and months. But AMD has implemented other image quality enhancements such as CAS or Contrast Adaptive sharpening which is meant to counteract the unwanted blurriness from AA methods like TAA and FXAA for example.

Personally, I’ve been waiting on AMD to step up their game. As a consumer and a tech enthusiast, I get that competition makes the market stronger and we benefit as consumers. I don’t like one company over the other, I like them both and look forward to the products they manufacture. Competition also breeds innovation as one company tries to “outdo” the other.

The New Radeon RX5700 GPUs performed well with only a few minor hiccups that were easily overcome. However, at the time of this review, overclocking for me was a non-starter. With the current version of WattMan or the public version of MSI afterburner, any slight increase in clock speed on the GPU or memory caused instant crashes upon game launch. While running, the GPUs do get rather warm and the shroud on the Radeon RX5700 gets uncomfortably warm. I said it earlier but I feel the blower-style coolers need to go the way of the dodo. As far as thermals, we’ll have to wait to see what AIB manufacturers come up with as far as cooling solutions. If you’re looking for water cooling solutions, I expect to see water blocks for the reference cards on the market very soon. AMD has lowered their launch prices which make these GPUs even more desirable.  As AMD gets their drivers sorted, I expect performance to further increase as well as overclocking stability. A few minor complaints aside, AMD has really hit the mark with the new Radeon RX5700 GPUs.

Want to see more about AMD Products we have reviewed