The Consumer Electronics Show, CES, which is put on by the CTA, has gone through many changes over the years. It was formerly known as the Consumer Electronics Association, or CEA, before the name change in 2015. The one unexpected change that no one saw coming was something called COVID-19. It has changed our world as we know it and for the future. Some for the bad, some for the good, and for the unknown.

Just in case you might not know what CES is all about let me do a quick overview. The Consumer Electronics Show allows new inventors to introduce their products, allows established manufactures to also show their new and future products. For most, it is really about the networking and connections that are being made and created. This is how you get the word out about your new “Widgets” that everyone will have to have in the upcoming year.

The 2021 CES was the first one I had missed in about 15 years or so and well, it was a real shock to my routine as someone that plans ahead for months and weeks to maximize the time spent at Las Vegas for the event. The months ahead are filled with emails back and forth to all the PC manufacturers of hardware and products to schedule meetings to see what is going to be new and to catch up with friends in person, and make new ones for future events and product releases and of course the invites to some of the legendary parties that happen during the nights. The stories that have been told, could be told, and not be told.

An average day, for four to five days, for the Modders Inc crew while at CES is really packed. Up at 7 am or sooner, grab something to eat, and jump in an Uber to the first meeting at 9 am. If we are lucky we can be out of the meetup in less than an hour and off to the next one that starts at 10:30 am. Oh. by the way, every meeting is at a suite at one of the resorts on the Las Vegas strip which can take 20 minutes to get from one to the next. So you try to schedule meetings with enough time in between to not have to rush or be late for the next one. After many years of trial and error on working on the perfect schedule, we have found that it is totally impossible to do when you have scheduled 25+ meetings.

Sure it starts off great and you’re three meetings in and you are actually on time, well CES “On Time” is when you are 15 minutes or less late to a meeting. By mid-day, the game is over and you do the best you can to make the next 5-6 meetings. You may or not get time to eat lunch so by the time dinner comes around – 6 pm- you are already dead tired and super hungry, from dragging your backpack with cameras, video equipment, audio equipment, batteries, and maybe some sort of snack. If you are lucky you have an hour before having to head out to an event meeting and if they have some sort of food you’re you are ecstatic. After about an hour or so it’s off to the first party. Some nights there are as many as 3-4 parties and of course, there are plenty of drinks. Open bar (free drinks, beer, wine, mixed drinks, and etc) is the norm and well you can imagine being in Vegas and having free alcohol at every party, this combination does create stories. Let just say at one party we termed the phrase “Wheel Chair Drunk” as that is how one person left.

Over the years, we, the media, have seen a decrease in some of the largest companies not attending CES. Why? Two reasons.

2020 brought a third reason that needs to be mentioned and that is Lack of Resources. The lack of people able to work it created the product shortages we all know too well. When you can not create any hardware to sell and do not have the means to get stuff to work on making new products, you can’t afford to spend money and promote what you do not have.

For those that are already in the PC hardware world, we know what most of the new products are in one form or another. Going to the companies suites, which for the time they are there can cost $20,000 or more, is about seeing maybe one or two prototypes that we were told about, but it really is about talking face-to-face with the people you have been emailing all year long. These face-to-face meetings are so important for both parties to learn about each other, bounce ideas, and plan future projects. These meetings have all but stopped and have turned into “Virtual CES meetings” where you get to see the new stuff from 100s to 1000s of miles away and talk to someone like you are talking to people from work or with family on a Zoom call and we all know how much we “enjoy” that. It is just not the same as you can’t shake hands, share a drink, and just sit back talk some BS, and of course, maybe do a bit of work.

The First non-in-person CES brought something that, well I am surprised that no company was doing before. A CES video showcasing all the new products, with details, to everyone so that they can see the new and upcoming products and get that “CES Feeling” such as the one from our good friends at EK. Here is an example of what I think we will see every year from now on.

I can see some things changing forever for CES, while other stuff will not be affected at all.  I can see it changing back to an event that showcases new companies with new ideas with innovative products. Show what the future will look like. Bringing back the excitement and all the WOW factors back to the largest electronics show.

Even though CES 2022 was once again an in-person event 95% of the people/companies that we work with decided not to attend for several different factors. Some decide within a week or a few days before the start of CES. A few are doing virtual meetings while others are just doing videos. This brought Modders Inc to decide that this would be the second CES that would not attend. We really do miss seeing all our friends, hanging out with each other, and trying to find time to have some fun. With fingers crossed and high hopes, we will once again be at The Consumer Electronics Show, CES. 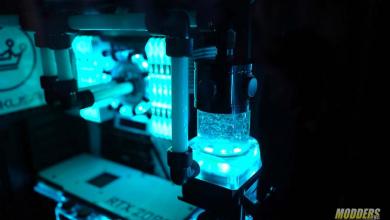