A direct-touch heatpipe design is the go-to solution for most affordable mainstream coolers with good reason; they are very cost-effective for both consumers and manufacturers. Applied to the classic U-shaped tower design, it has proven to be a winning combination. With the glut of competition in this market space however, the offerings are becoming predictable and generic but Enermax aims to alleviate that monotony with a modern twist. The original ETS-T40 CPU cooler line from Enermax utilizes the same design principle with four 6mm heatpipes formed in a U-shaped tower directly making contact in the middle with the CPU IHS. Enermax offered the ETS-T40 in several color and fan combinations but it has now been updated to provide a more functional slim cooling solution that will provide optimal clearance on most motherboards.

The Enermax ETS-T40fit is available in four different flavors ranging from $39.99 through $44.99. One of these is the ETS-T40F-BK “Black Twister” equipped with a 120mm Enermax T.B. Apollish LED fan and black thermal conductive coating as a preventive measure against copper oxidation. Since it is a “slim” tower design, the Enermax ETS-T40F-BK promises 100% RAM compatibility as long as the CPU socket layout follows the Intel specified keep-out zone. Other variants of the ETS-T40fit include an all-white version utilizing a pair of Enermax white-LED Cluster fans and two “regular” versions with non-thermal conductive coating treated surfaces equipped with a 120mm as well as a 140mm Enermax Twister Bearing fan.

So there is no confusion on what ETS-T40fit variant is inside the box, the front cover features a 3/4 view of the heatsink in operation. All these different ETS-T40 variants share the majority of the same design and features which are listed at the back with a dimension layout printed on the side.

Inside, the ETS-T40fit Black Twister heatsink is padded with two form-fitting plastic shells, holding it in the middle of the box. The T.B. Apollish fan is already pre-installed with its plastic retention mechanism.

The accessories are housed inside a box on the side and includes all the mounting equipment necessary to mount the ETS-T40fit on both Intel or AMD systems. An extra fan mounting clip is also provided for mounting another fan in “pull” position. A small tube of Dow Corning TC-5121 thermal grease is included with the package as well. 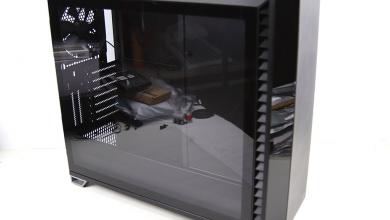 May 14, 2019
Get Your Shirt NOW before they are all Gone!
Guest Contributors Wanted
Join Our Discord!
Case Mod Gallery