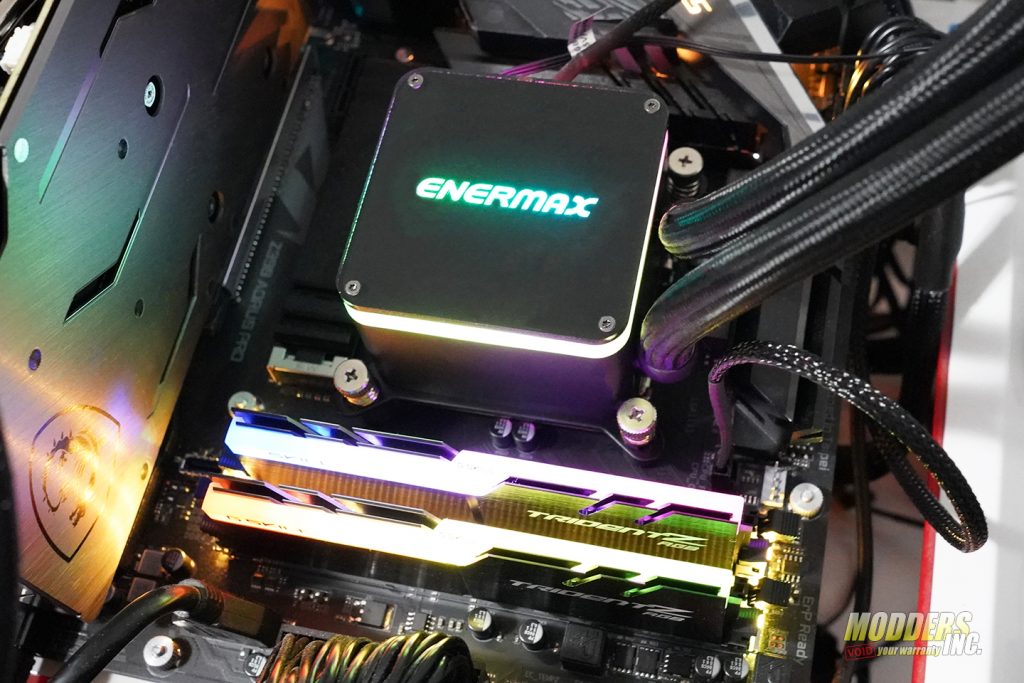 All testing on the Enermax Liqtech II 360 was done on the Core I7 8700k. The I7 8700k has a base clock of 3.7 GHz. However, from stock, it usually boosts to about 4.3 GHz. I increased the overclock to 4.5 GHz and left the voltage at stock. This seemed to be a reasonable overclock, that just about anyone should be able to achieve with an 8700k. In the past, I’ve gotten this 8700k to 4.8ghz, but not much higher. I tried to set the CPU to 4.8 GHz, and the system crashed instantly. At 4.7 GHz, the system ran. It was fine on light tasks. However, when I attempted to run the Aida64 FPU stability test, the processor hit 100°c in a matter of seconds and the system crashed.  I do my best to keep the ambient temperature around 20°c, or 68°f. Once the ambient temperature hits 21°c (about 70°f), I stop to allow the room to cool down a bit. There are no less than 30 minutes between each benchmark, and or program. This allows the processor to cool down and it gives more fair and balanced results. 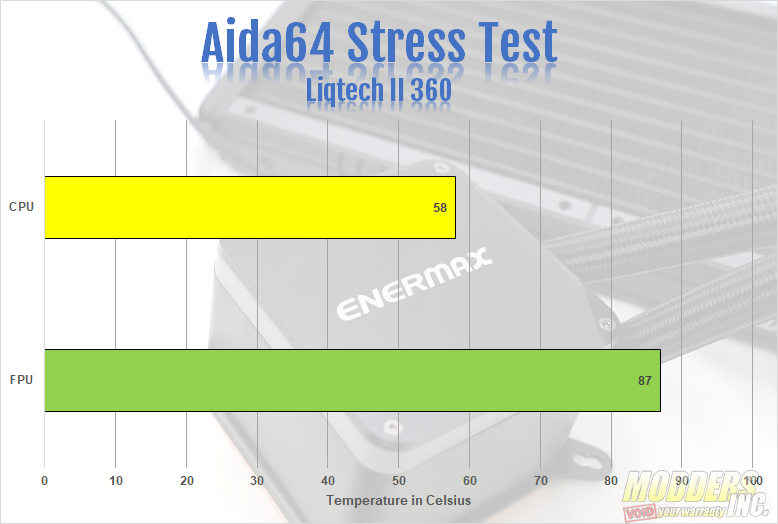 While running the AIDA64 CPU Stress Test, the temperatures were not that bad. Both the CPU test was run until the temperature for about 15 minutes in total. This is the target time for each of the tests to be deemed successful in my eyes. The AIDA64 CPU stress test hit a max temp of 58°c. During the CPU stress test, we recorded no throttling. As stated before, the AIDA64 FPU Stress Test put a far greater strain on your processor. Therefore, there wasn’t too much of a surprise to see the CPU throttle a bit. By the AIDA FPU stress test, the 8700k throttled about 3%. This test also ran for about 15 minutes. In that time, it hit a max temperature of 87°c. This isn’t by any means the lowest temperature but considering the load, the FPU stress test puts on your processor, its not terrible either. Our 8700k passed the Aida64 CPU stress test with no problems. The FPU test was a bit different. Although the system didn’t crash, our 8700k did throttle a bit. It may have made it to 15 minutes. However, due to the 8700k throttling, we have to consider the FPU test a failure.

The cooler that is usually on my test bench is the Swiftech H320 X2 Prestige, slightly modified of course. The H320 X2 Prestige edition comes with Swiftech compression fittings and 5/8 flexible tubing. However, Like with most AIO coolers, the tubing isn’t long enough to install the H320 x2 on the Praxis Wet Bench. So, I replaced the tubing. I also replaced the Apogee block that comes stock with an Ek Supremacy EVO. So keep that in mind. The last thing is the H320 X2 is using Mayhems X1 Clear coolant. So, it does have several unfair advantages. 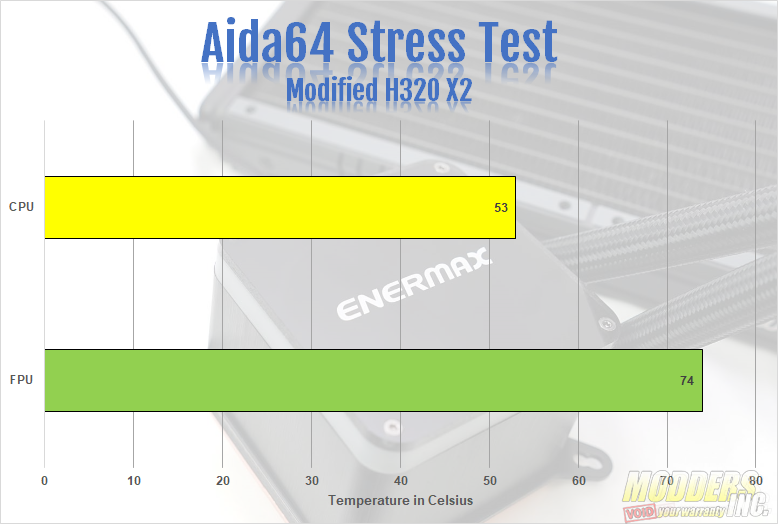 While gaming, both the noise levels and temperatures weren’t bad. When the temperature would get too high, the fans would ramp up to lower the temp. While playing Far Cry 5, the average temperature would hover around 65°c and max out at about 74°c. For comparison, the cooler on my test bench is usually the Swiftech H320 X2 prestige. Its also been modified with an Ek Supremacy Evo in place of the original Apogee block it came with. While playing Far Cry 5 for about the same time, 30 minutes or so, the 8700k hit a max temperature of 68°c and averaged around 60°c

We also tested noise levels of the cooler using an Android app called Sound Meter. I know its not the best way to measure sound, but it’s the highest rated sound meter app on the app store and can at least give an idea of the noise levels. We recorded the noise levels with both the pump and fan speeds at 50% as well as 100%. At 50%, the system overall had an average decibel level of 37.7 dB and a max level of 42.6 dB. At 100%, it was loud, at times, and distracting. But the fans do not run 100% all the time. But when the temp rises, the fans will ramp up to 100% and that’s when the system gets loud. At 100%, the system ran at an average of 74.5 dB with a max of 83.4 dB. Now, keep in mind that this is on an open test bench and will not reflect noise levels in a closed system. Especially a case with sound dampening material. Not to mention, we don’t know how accurate the app we use is. We mention what app we used so users can compare their results to ours. 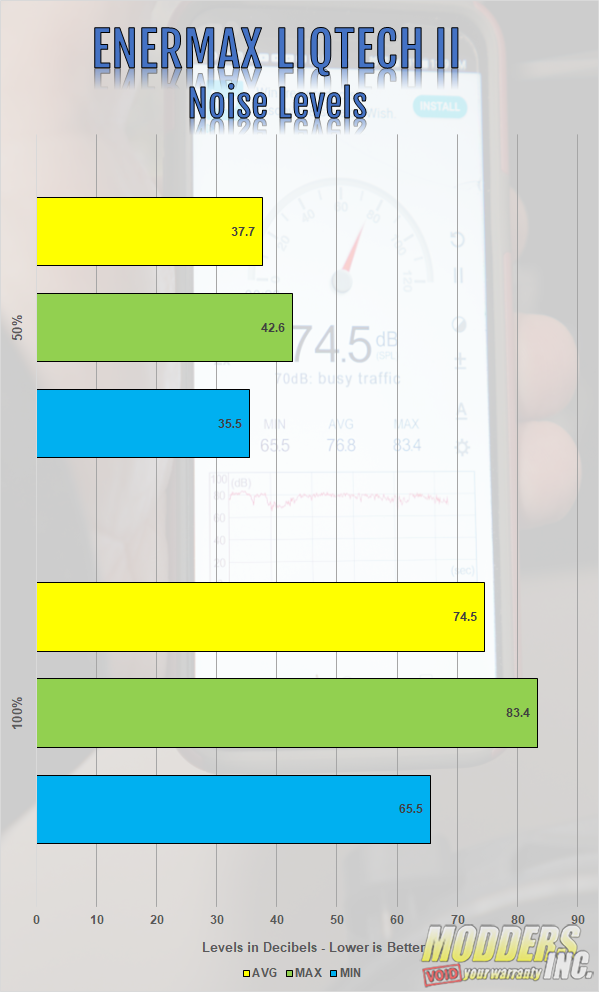 As we mentioned earlier, all testing was done with the pump and fan speeds at 100%. The stock setting was the fan and pump speed set to 50% speed. It was whisper quiet. However, it affected temperatures. The chart below represents initial temperatures taken about 20 minutes or so after the system was initially booted, first thing in the morning, on separate days. At 50% speed for both pump and fans, the max temp hit 53°c and the minimum was 43°c. The average was about 44°c at idle. When we tried to run the AIDA64 FPU stress test, after about 6 or 7 minutes, the temp hit 100°c. That is the reason all testing was done at 100% fan and pump speed. At 100%, the max temp hit only 45°c, 8° cooler than at 50%. The minimum temperature hit only 31°c and averaged about 34°c at idle. That gave us, at average, a difference of about 10°c between 50% and 100% pump and fans speed. 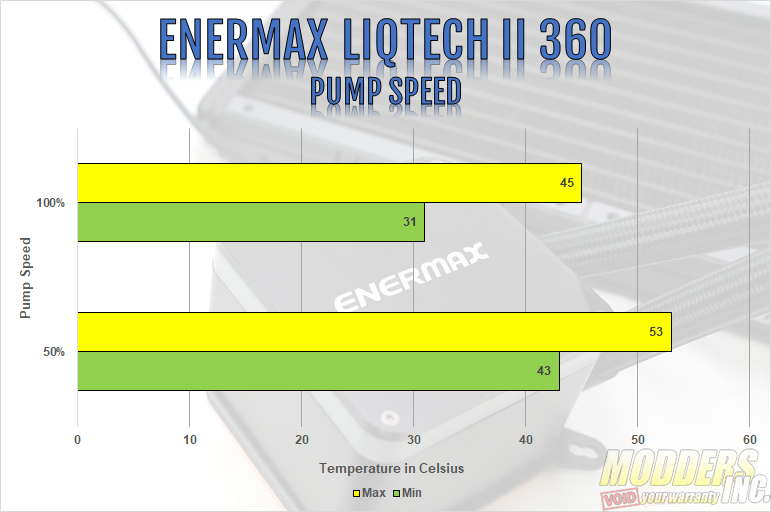