Computer cases many or many not come with cooling fans. If they do it might include one which might not be enough to help keep your hardware cool. Your search for some cooling fans begin with your standard fan and if you want to add some flare you will look at your basic LED lighted fan. But what if you could get a good fan with above normal lighting that would take your case style to the next level. Enermax has introduced a new 120mm fan called the T.B. Vegas Single. Shown here is an assortment of fans that they can be had. Each fan shown has different color LED’s which are red, white and blue…HA! I just noticed I what order I put them in. The backside of the boxes have all the detailed information that you should need about the fan. Below is most of the details that you would find on the packaging. On the front side of the box we are told about something called APS Control which allows you to set the top speed of the cooing fan. We will go into more details about this later in the review. So what is this Twister Bearing? I will give you an except from Enermax along with a link to a page they have that explains it in more detail.

“Enermax has overcome this “dead-end logic” by using magnets instead of oil to stabilize the bearing. Without the friction and traction of oil-based bearings, the magnetic fields allow for stabilization without deterioration of the bearing and lack the operating noise and the well-known noise increase over time of oil-based bearings. Additionally, the lack of oil allows higher ambient temperatures and longer life time.” Included in the each box you are given a Molex power adapter plug, a double sided sticky pad and four rubber isolator mounts that help removed any noise that could be transferred from the fan to the case. The rubber mounts are fairly easy to use. 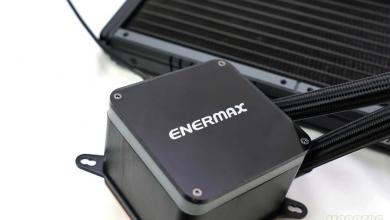