Rosewill is one of those companies that have almost every product under the sun and mechanical gaming keyboards are no exception. Their earlier mechanical keyboard offerings followed the more traditional, contemporary design but their latest RK-9300 mechanical keyboard is breaking away slightly from that mold while courting the gaming market. The Rosewill RK-9300 has not been designed as crazily as other gaming keyboards in the market however, in fact it is still somewhat subdued looking but definitely much more different than the usual very rectangular keyboard. Equipped with Cherry MX switches, users get the option of either blue or brown tactile switch on the Rosewill RK-9300.

Both versions use a 104-key ANSI layout and are fully backlit with blue LED. The top plate uses a thick metal and the switches are mounted on this revealing the base so it is higher profile than a typical keyboard which usually has a sunken plate. The RK-9300 offers all of the basic amenities expected of all gaming keyboards these days including N-key roll over via USB, Windows lock option, media and volume controls via Fn key combo and backlight control. It is somewhat of a no-frills mechanical gaming keyboard although the top plate extends further downward so it sort of acts like a wrist rest. The good news is that it also has a no-frills pricing at only $99 MSRP and is even more affordable at $79 currently on NewEgg.com. 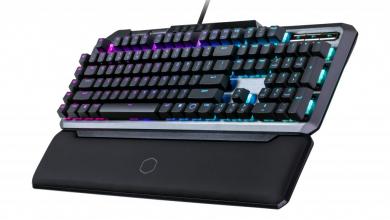 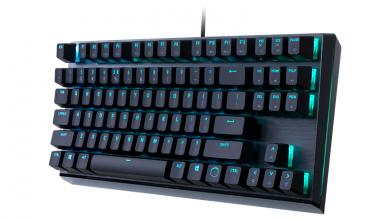