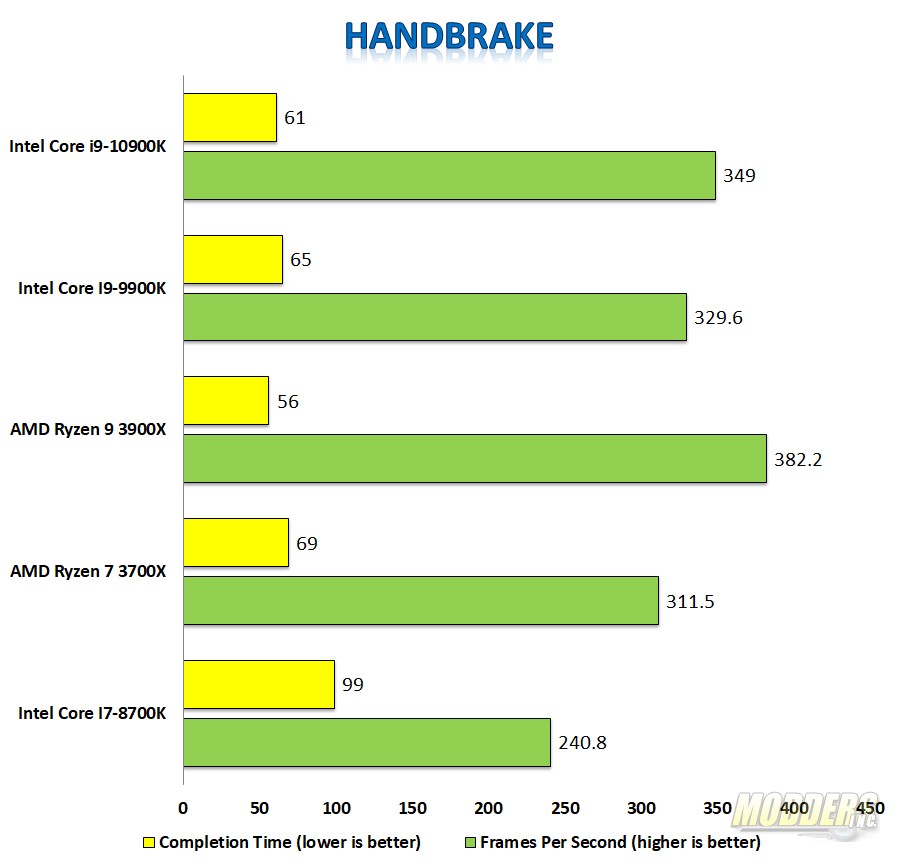 The Core i9-10900k shaves 4 seconds off the 9900k’s completion time at 61 seconds and gains 20 FPS average frame rate. Thanks to the extra cores, the AMD Ryzen 9 3900x still sits atop the leaderboard in Handbrake.

The 7-zip benchmark shows a rating in MIPS (million instructions per second). The rating value is calculated from the measured speed, and it is normalized with the results of Intel Core 2 CPU with multi-threading option switched off. So, if you have a modern CPU from Intel or AMD, rating values in single-thread mode must be close to real CPU frequency. There are two tests, compression with LZMA method and decompression with LZMA method. Once the total passes reach 100, the score is taken. 7-Zip gives the resulting score for decompressing, compressing, and an overall score. 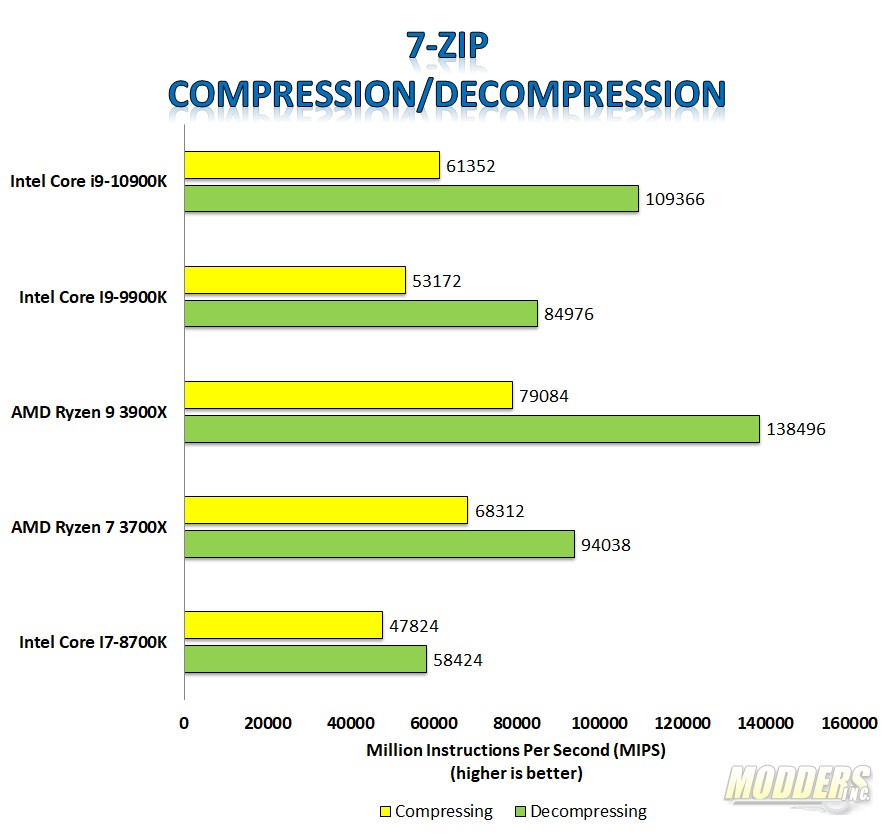 The Intel i9-10900k compressing benchmark while still beating out the 9900k, couldn’t really match the performance of even the Ryzen 7 3700x CPU. I thought this may be a mistake at but, each benchmark I run, I run it a total of 3 times and average the results. It would seem that 10 cores aren’t quite a match for AMD’s performance in compression. However, when it comes to decompression, the i9-10900k sits right where you’d expect, between the 9900/3700x and the Ryzen 9 3900x. 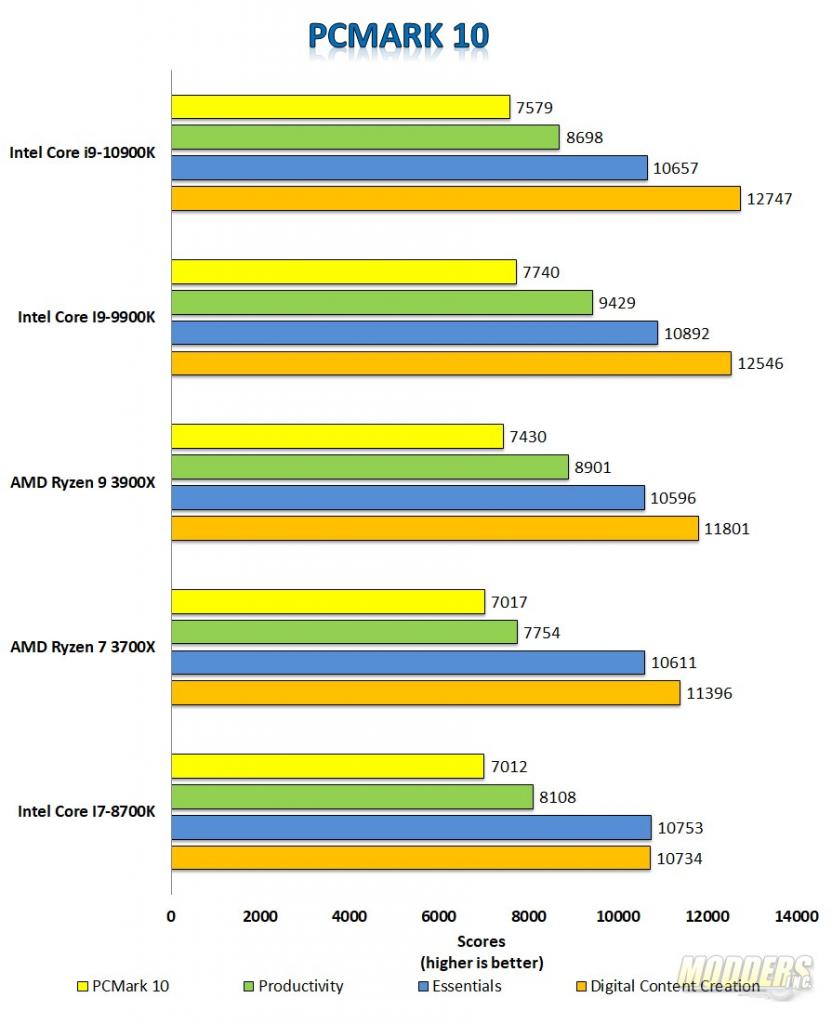 In PCMark 10, we see the Intel i9-10900k trading blows in a very close battle with the Ryzen 9 3900x. Every test is very close to each other in terms of performance.

IPC testing. I started looking at IPC performance at a given clock speed in my AMD Ryzen 9 review. I think this helps give a good indication of performance gains over a given generation of CPUs. Setting all the CPUs at 4.2 GHz. I think this gives an apples to apples comparison across generations as well as vendors and gives us better visibility when looking at a clock for clock comparison. In the next two tests, all turbo and boosting were disabled and the CPUs were locked in at 4.2 GHz. 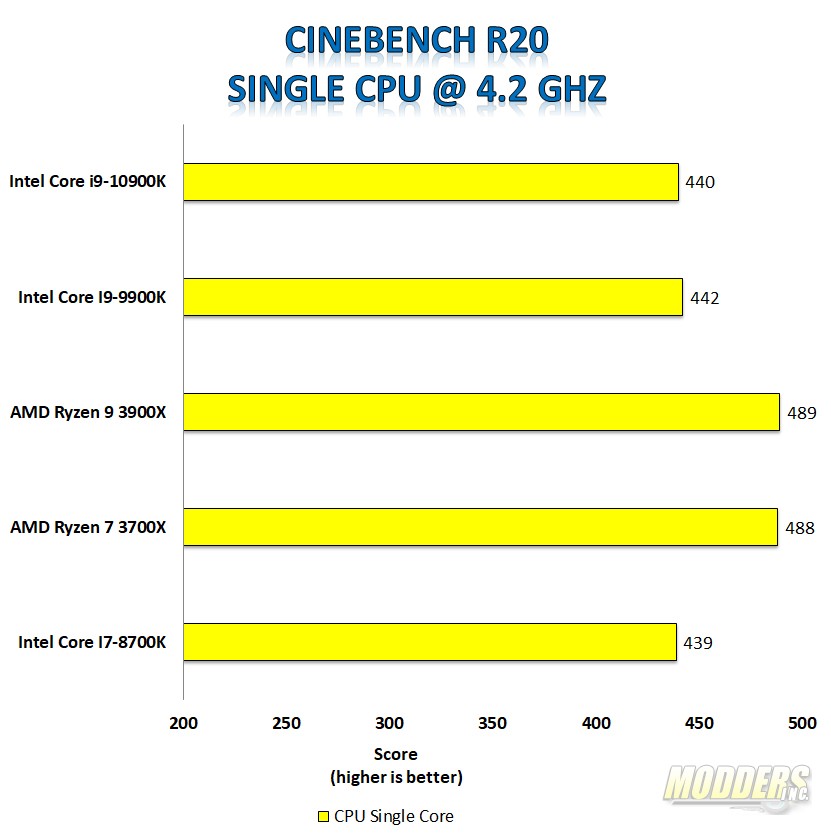 Let’s start with Cinebench R20. You can see here that the difference between the Intel i9-10900k and the Intel i9-9900k when clocked at 4.2 GHz is minor at best. AMD’s IPC at 4.2 GHz is still a bit better than Intel’s. Keep in mind that Intel is still using a Skylake derived core architecture. 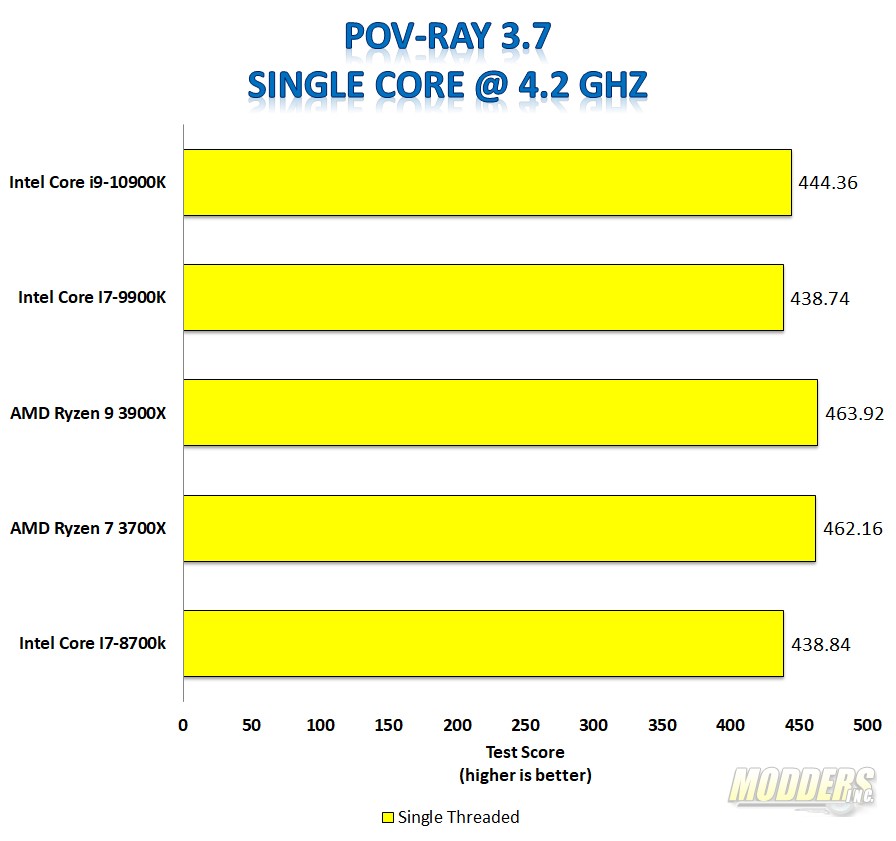 POV-Ray shows the same situation as Cinenbench in terms of single-core performance at 4.2 GHz. Intel’s architecture is showing its age.

As we dive into our 1st gaming tests, you can see that compared to some of the other tests, the Intel i9-10900k is extremely close in performance to AMD’s top contender and exceeds the performance levels of the 9th gen i9-9900k. While the overall score is a good indicator of the performance of the PC overall, since this is a CPU review, I tend to focus on the CPU score. Intel’s clock speed advantage over the Ryzen 9 3900x nearly erases the 3900x’s advantage in core count.

For gaming, I chose to mix it up a little bit from what we’ve done in the past. Most games we test are first-person shooters, so I chose to throw a flight simulator in the mix. Xplane 11 depends heavily on single-thread performance, even more so than newer modern games.

Intel’s claim of the i9-10900k being the world’s fastest gaming processor rings true. In every game I tested, the 10th Gen Core i9-10900k beat all other competitors.