The newest boost feature on the i9-10900k is Thermal Velocity Boost or TVB. This allows the i9-10900k to exceed the published specification and boost to 5.3 single-core frequency if the conditions are right. Those conditions are CPU temperature under 70°C and some available headroom in the power budget. There are two favored cores as well. This means the system will boost these two cores higher than the rest in single-core/dual-core usage scenarios. In my case, my favored cores are Core #6 and Core #7.

To gather this information, I used the licensed version of HWMonitor Pro and captured the logs during a run of the single-core test in POV-Ray 3.7. 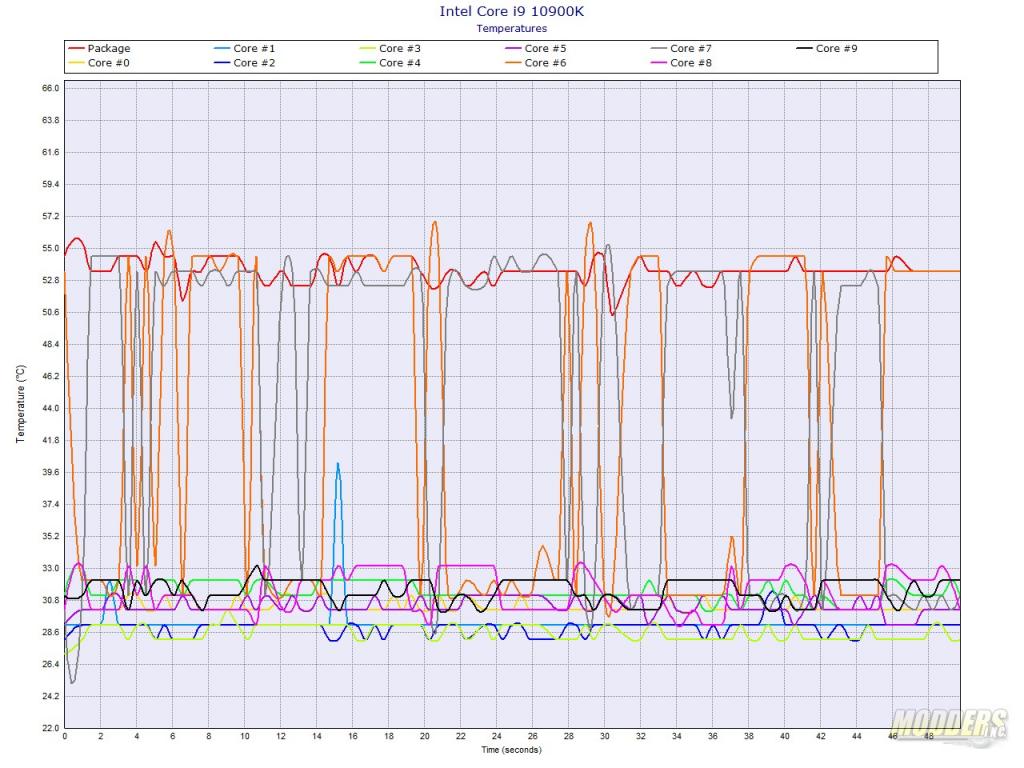 In its stock settings, the Z490 and i9-10900k kept the core temps between 52 °C and 55 ° C utilizing the custom loop described above. Do note, that as I stated earlier the favored cores are in use the most, Core #6 is the orange lines on the graph and Core #7 is the grey lines on the graph.

Now, let’s take a look at the clock speeds and see how they averaged over the same amount of time. 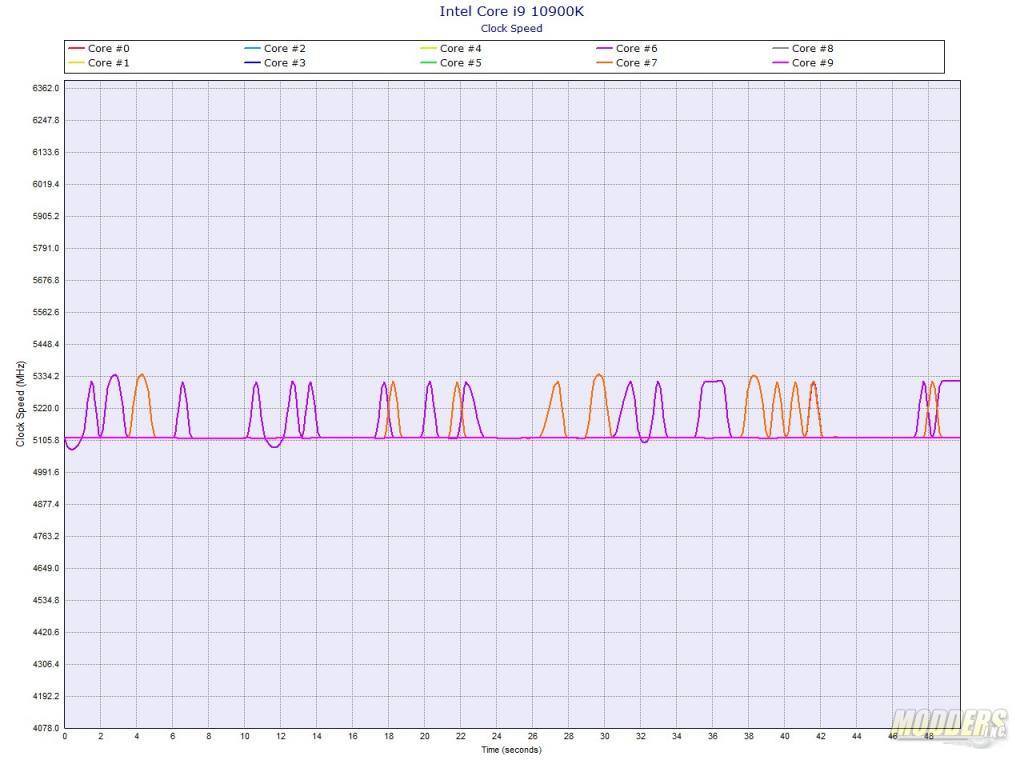 Note that in this chart Core #6 is purple and Core #7 is orange. As you can see, we did boost over 5.3 GHz for short periods and the load switches between the two cores.

Overclocking the Intel Core i9-10900 is pretty easy, even for a novice overclocker like myself. To get a quick boost, you can simply disable the All Core Enhancement in the motherboard BIOS. While it sounds counterintuitive, this cranked the all-core boost up from 4.9 GHz to a steady 5.1 GHz. At 5.1 temperatures are still in check and the hottest core hit 86°C. Keep in mind, did not tweak the BIOS voltage settings. The frequency in this mode stayed steady at 5.1 GHz. At the end when the test ended, there was a short single-core load that allowed the CPU to still boost to 5.3 GHz. With the voltage kept at the stock settings, you can see that the temperatures rose quite a bit. However, they are still under Intel’s recommended 100°C.

I still didn’t like this set up so I decided to look at utilizing the individual boost clocks based on active cores to overclock the i9-10900k. I played with turbo frequencies only and finally settled on 2-active cores at 5.5 GHz with an all-core clock of 5.2 GHz.

As the test ran along at 5.5 GHz, temperatures hit in the upwards of 60°C degrees.

The final set of graphs is the all-core test at 5.2. After a bit of tweaking, I have the fans and pump ramp up to 100% rather aggressively.

5.2 GHz is fine and all for all cores however, temperatures are considerably close to the maximum temperature that Intel recommends. I had one core hit 98°C and the rest stayed pretty much under 96° C.

My final overclock settings were 2 active cores at 5.5 GHz, 4 active cores at 5.2 GHz, and an all-core at 5.1 GHz. I was able to reset the fan curves to stock.  Temperatures are still in the mid-70s but I still get a nice boost when less than 4 cores are being utilized. I ran a few more benchmarks compared to stock settings. I’m sure with some voltage tweaks, we may be able to get the temperatures down even lower.

As you can see, there’s a nice jump in performance for the trade-off in temperatures.

Game wise, I re-benchmarked Ghost Recon: Wildlands and Xplane. Both limit core usage and I was able to keep the CPU in the 5.5 GHz range during the benchmark. 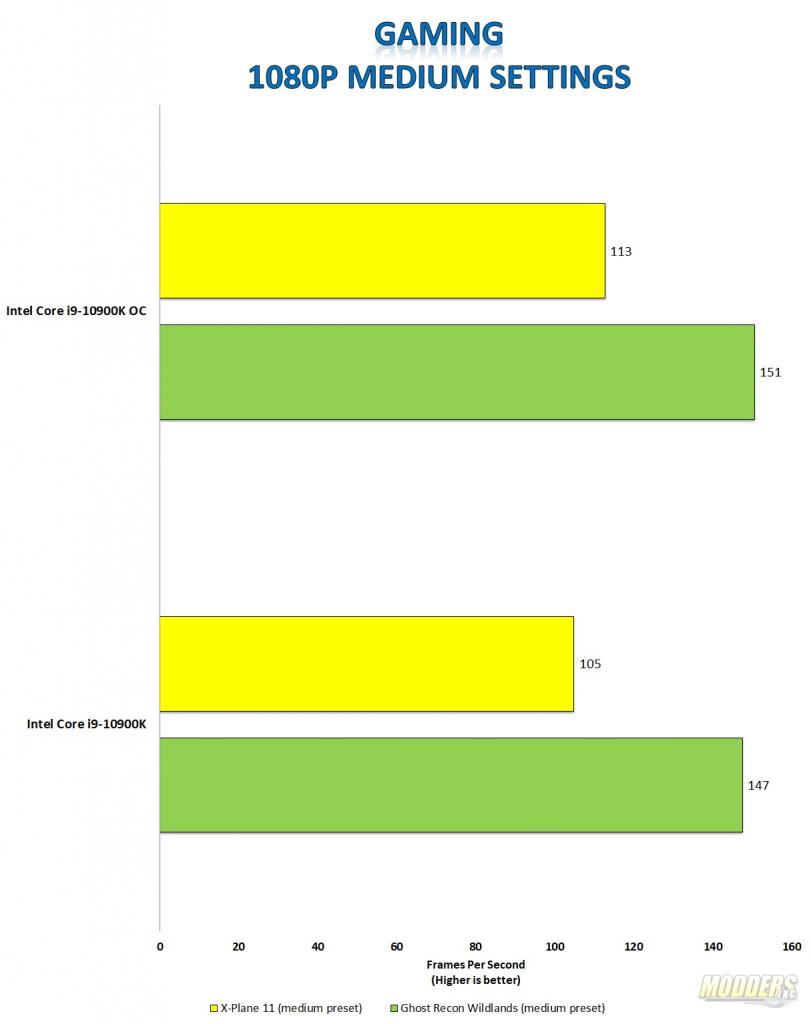