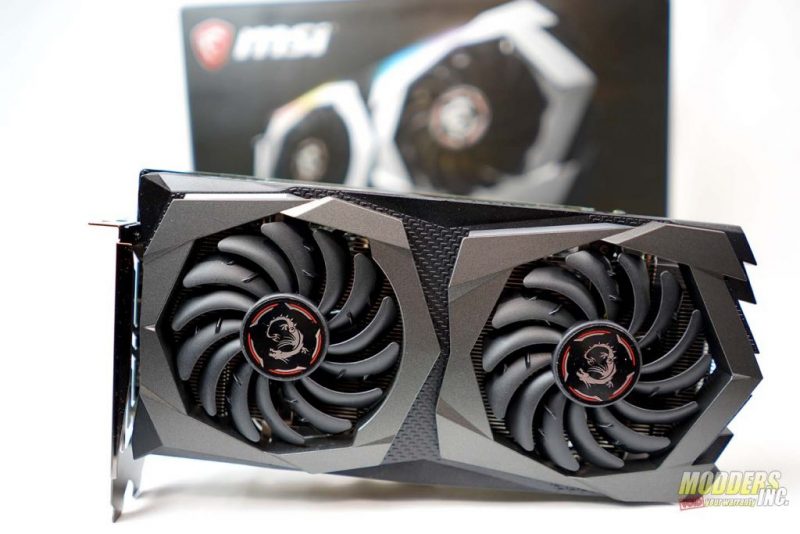 MSI claims that with the Twin Frozr 7 cooler, they have “mastered the art of aerodynamics.” Airflow Control Technology forces the flow of air directly onto the heat pipes. At the same time, the heatsink of the Twin Frozr cooler provides a large surface area to help dissipate more heat from the heatsink.

The heatsink is made up of three, 6mm copper heat pipes that run through a massive, tight aluminum fin array that make up the heatsink of the Twin Frozr 7 cooler. Like other MSI Gaming series cards, the Gaming X 1660 ti uses a large nickel-plated copper base plate to transfer heat from the GPU to the heat pipes. MSI uses only premium thermal compound on the GPUs that is designed to outlive their competition. They also use a die-cast metal sheet that acts as a heatsink for the memory modules. This die-cast sheet connects directly to the IO bracket. This provides additional protection from bending, along with the back plate.

The Torx Fan 3.0 has two distinct types of fan blades. The first being the traditions type of blade designed to push air down steadily to the heatsink. The second is what MSI refers to as a dispersion fan blade. This style of fan blade is slightly curved. This curve allows the fan to accelerate airflow, increasing the effectiveness of the fan. One of the key features of the Twin Frozr cooler is its Zero Frozr technology. First implemented in 2008, the Zero Frozr technology allows your card to be silent when under 60°c. As long as the card is under this temperature, the fans will not spin. Once the card reaches above 60°c, the fans will start to spin. This keeps the card silent while the system is idle, or the card is under a light load. While benchmarking, or under a heavy gaming load, the fans spin up to keep the card cool.

The MSI Gaming X 1660 TI has what one might call a traditional IO. Meaning one not designed with virtual reality in mind. The IO consists of a single HDMI 2.0 and three DisplayPort 1.4 ports. The Gaming X 1660 ti also has a brushed aluminum backplate that helps with the rigidity of the card. Both the shroud and the back plate wrap around the end of the card for additional protection of the heatsink. This card also sports a custom PCB with a 4+2 power phases and designed with high-end components. The Gaming X 1660 ti is powered by a single 8-pin power connector. Technically, this tier of card is powered by a single 6-pin. However, the combination of the custom PCB and 8-pin power connector should help with overclocking.

Even the components are designed to look good with the MSI dragon logo on each Ferrite Choke. The Super Ferrite Chokes are labeled with SFC on them. Like on other cards they use their Hi-C capacitors. The Gaming X 1660 ti uses a 4 + 2 Phase PWM Controller. I did notice 2 empty spots for memory. So, maybe there will be an 8 GB variant of this card eventually?