Before we open up the Lucid LD03, it is worth mentioning that the LD03 does not come with a manual.  This is part of Silverstone’s move to paperless manuals.  There are three ways to access the LD03’s manual according to Silverstone:

Because of its unusual design, it isn’t intuitively obvious how to open the Lucid LD03.  Because of this, Silverstone has provided a short video to demonstrate the proper way to open the case.  I highly recommend watching the video if you buy the Lucid LD03.  There is a very real risk of breaking the case if you attempt to open it the wrong way.  You can find the video on the product page or on YouTube.

The top of the case slides open with the press of two latches on the back of the case, revealing the rear I/O cutouts and one of the case’s two fan mounts.  It also reveals the end of the power supply pass-through cable.  This should look familiar if you have ever owned a compact ITX case before. 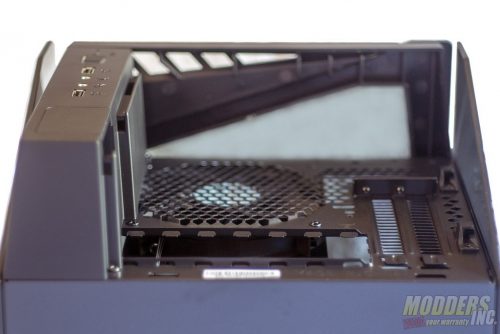 The expansion slots feature an interesting sliding cover that serves no functional purpose.  I have seen these on other cases before, but I am not sure why the LD03 has one considering that it has a cover over the entire I/O area.  It is, however, a premium touch and I can’t fault Silverstone for including it. 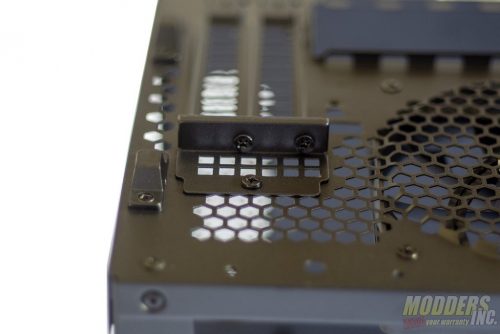 Once the top is removed, it is possible to open the front of the case.  Being a little overly confident in my case opening abilities, I pulled too hard and nearly dropped the front glass panel when popped off of the chassis.  The panel uses four clips that hold the panel securely, but release very quickly when sufficient force is applied.  I recommend pulling gently from both the top and bottom of the panel to remove it safely.  It doesn’t take much effort to remove the panel, and losing your grip on the panel can lead to it falling and possibly shattering. 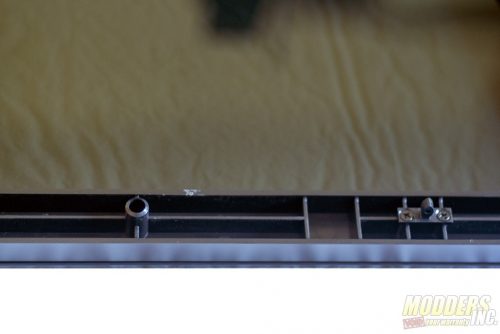 Once you’ve removed the front of the case, the side panels are held on by two oversized plastic pop rivets per panel.  This is an interesting choice on Silverstone’s part.  While pop rivets are easy to use, they are far more delicate than thumbscrews.  My guess as to why Silverstone went with pop rivets instead of captured thumb screws comes down to the weight of the panels.  The rivets allow you to slide the panel into place and then lock it down without fear of dropping it.  That being said, I still would have liked to see at least one captured thumb screw alongside the rivets for extra safety.    To remove the panel, simply pull out on the top of both rivets and the panel will slide off.  The glass is securely bonded to what is essentially a standard steel side panel. 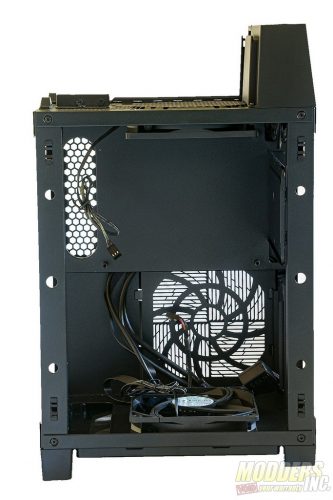 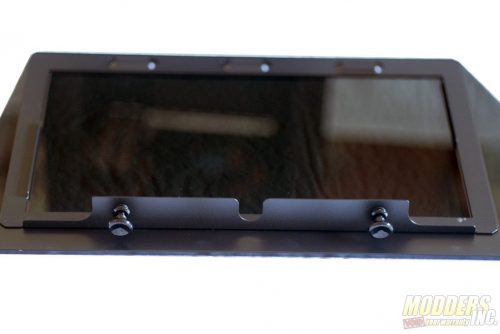 Now that we’ve opened the case, we can see the included bag of parts.  The bag contains a warranty pamphlet, the required screws, two spare pop rivets, a two fan splitter harness, and a few zip ties. 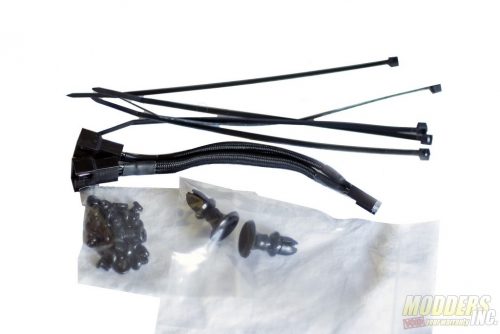 The Lucid LD03’s Front I/O panel features two USB 3.0 headers, two audio jacks, a blue LED power button, and a small reset switch.  This setup is fairly typical of ITX cases.  The front I/O cables are almost entirely black, which makes them less visible and adds to the premium feel of the case.  By default, they run behind the motherboard and out through a hole in the bottom of the motherboard tray, however it is possible to reroute them. 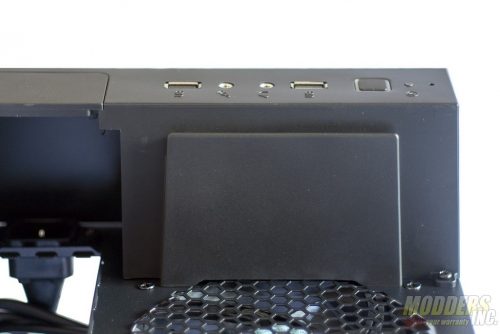 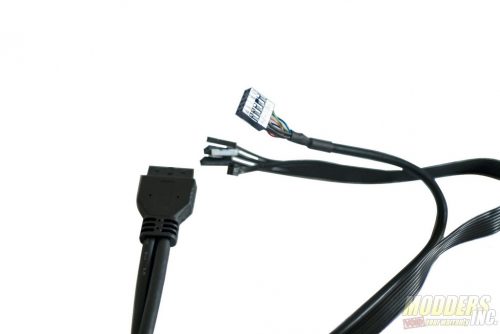 The interior of the LD03 is fairly spartan and contains only the motherboard tray, the storage tray, the power supply mount, and two included fans.  The majority of the hardware mounts to the right side of the case, while the left side is reserved for the graphics card.  Unlike most other cases, the motherboard tray, hard drive tray, and power supply bracket are all screwed in instead of riveted in place.  This makes building in the case significantly easier and makes it easy to strip the case down to a bare frame for painting if you want to mod it.

The motherboard tray has a large cutout on the left side that corresponds with the venting on the back of the case.  It also has two small gaps at it’s the bottom edge that is for the power pass-through cable and the front I/O wires.  There is a cutout at the top right of the tray for all of the cables coming in from the top of the case and a small cutout at the bottom right of the tray that seems to be for routing the front I/O.  However this small cutout is exactly too small for the USB header, so I am unsure of its purpose.  Presumably, if you have a board that has its front panel header near that opening, you can use it to clean up your cable clutter.  I would have liked to see Silverstone open up the cutout just a few millimeters more to allow the USB header to fit through.  The storage tray is largely unremarkable.  It has one space for a 2.5 inch drive and one spot for either a 2.5 or 3.5 inch drive.  It is secured to the motherboard tray by two pegs that protrude from the motherboard tray, and to the frame of the case by two screws. 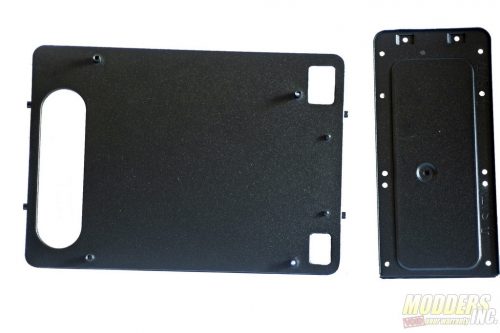 The power supply bracket is a small SFX only affair that is offset into the case to provide clearance for the pass-through cable and the air exiting the power supply.  It attaches to the case with three screws. 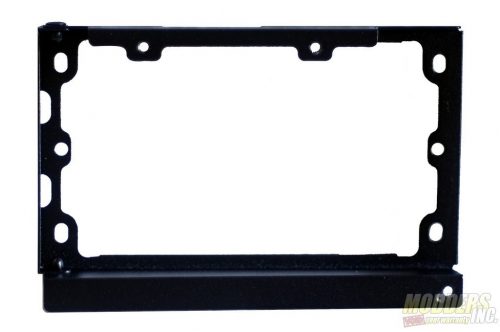 There are two fans in the case.  Both of them are the same basic black 1200 RPM 12v fan, with one at the bottom of the case to draw in fresh air and one at the top to exhaust hot air from the system.  While I usually prefer to see at least the option to mount larger 140 mm fans, the Lucid LD03 simply does not have enough space and the included fans are capable of feeding enough air to the system. 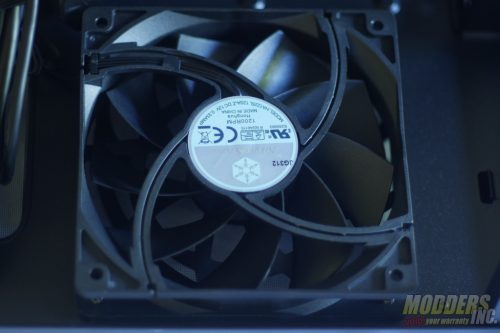 The last thing to note before we move on to the system build is the cutout in the floor of the case under the expansion slots.  This cutout exists to help fit extra long graphics cards that would otherwise not fit (this is listed as the oversize length measurement in the spec sheet).  Please note that if your graphics card is above the maximum width listed in the specs, it will not fit in this cutout. 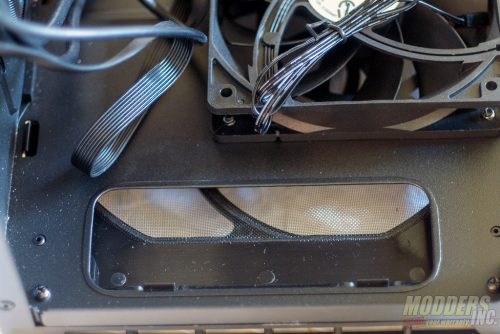