To test the headphone portion of the XPG Precog, I listened through a long list of songs that included tracks from Rush, Sabaton, Deadmau5, Disturbed, Imagine Dragons, Two Steps from Hell, and many others.  I also tested the Precog in direct comparisons with the Sennheiser Game Zero gaming headset and the Sennheiser H558 open-back audiophile headphones.  Many of the tracks I listened to were quite bass-heavy to test both the bass response of the headset, as well as the definition of different instruments in the track.  Most gaming headsets are good at producing crisp highs, but good bass and clarity are much less common.  I also listened to a variety of Dolby Atmos trailers and several Deadmau5 tracks to test the surround sound capabilities of the headset when paired with its sound card.

As it turns out, the Precog’s excellent specs on paper translated to a headset that has spectacularly good sound quality for its price.  While the Precog’s sound doesn’t quite match the openness and bass response of the HD 558 with a decent amp, it comes impressively close considering that the Precog is much less expensive.  Compared to the now discontinued Game Zero headset, the Precog has better bass response and clarity, which is likely helped by the Precog’s lower impedance.  The Precog’s dual driver setup also seems to benefit the headset’s clarity significantly, and the headset can play crystal clear highs over powerful mids and deep lows without significantly muddling the sound.  Even when just driven by the built-in audio chip of a phone, the Precog is one of the best sounding headsets I’ve heard so far.

The USB sound card is a bit more of a mixed bag.  Unfortunately, during my testing, it would frequently stop driving the right side of my headset.  I this seemed to be caused by a poor connection in the USB jack on the headphones, as the jack was quite loose and applying light pressure to the connection would sometimes restore audio to the right ear.  The looseness in the jack was present out of the box and was not caused by physical abuse of either the cable or the headset.  Aside from that unfortunate problem, the sound card was fairly impressive.  The three different sound modes allow you to tailor the headset’s sound to your needs.  The music mode is practically to how the headset sounds when using the 1/8″ cable.  FPS mode reduces the amount of bass that you hear, to make it easier to pick out higher frequency sounds in games.  7.1 mode is my personal favorite.  It doesn’t do a particularly good job of reproducing the directionality of sounds the way that a real 7.1 surround setup does, but it does a good job of expanding the headset’s sound stage and making everything sound huge.  Hilariously, this also makes every ad on YouTube sound like it’s playing in a movie theater.

In addition to testing the sound of the headset, I also took the Precog with me on a week long trip to Mexico to see what traveling with the headset was like.  The included carrying case made packing the headset relatively easy and prevented any scratches and scrapes that the headset may have otherwise picked up from being in my backpack.  The case is a little bulky but still, fits into the middle pocket of my backpack without significant difficulty.  I wore the headset for the duration of the entire flight down and did not experience any discomfort.  While the Precog isn’t quite as comfortable as the HD 558 or Game Zero, I had no problem wearing them for hours straight.  Noise during the flight also was not a big issue.  While the Precog doesn’t have any sort of noise-canceling technology for the headphones, it does an exceptional job of blocking outside noise.  The headset can also lay flat around your neck when not in use, which is convenient for short durations, though I found that keeping them around my neck like that became uncomfortable relatively quickly.

To test the Precog’s microphone, I recorded sound samples using both the USB sound card and standard audio output, then compared them to samples from the microphones on the Sennheiser Game Zero and Viper V330 headsets, an Antlion Modmic, and a Samson CS1 vocal microphone running into a Focusrite iTrack Solo.  Using the standard audio cable, the Precog’s microphone was a little clearer than the Modmic and substantially clearer than the microphone on the budget-oriented V330 headset but was not quite as loud or clear as the microphone on Sennheiser’s Game Zero headset or the Samson CS1 vocal microphone.  Using the USB sound card with XPG’s ENC noise-canceling disabled, the audio quality was similar, but a loud, high pitched whine was present.  I am unsure where this whine originates from, so I cannot say whether it was an isolated issue with my unit or a more widespread problem.  As advertised, enabling ENC cut out all of the background fan noise from my desktop and enterprise network switch, as well as all of the whine.  The overall sound of my voice was deadened somewhat, but overall the noise-canceling worked very well.

Here are the audio samples of each of the microphones:

The final thing I tested was XPG’s first-person shooter.  It is the only software listed on the Precog’s product page.  Despite being hyped up as a good way to test the Precog’s features, it’s really bad.  Aside from having decent directional audio, it feels like a weird knock off of Quake 2 featuring a weird ghost and limited ammunition.  I appreciate that they attempted including a cool little game with their headset, but it ended up being the one place where XPG missed the mark. 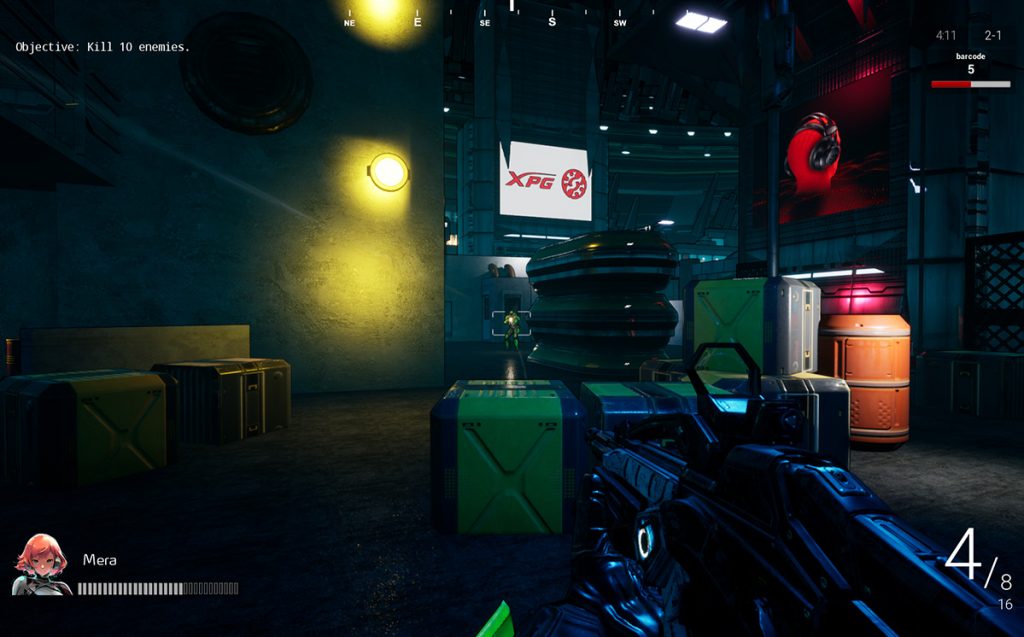