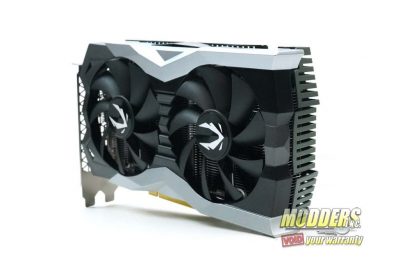 There are many things I can say about the Zotac RTX 2060 AMP, none of which are negative. Starting first with the aesthetics. The Zotac RTX 2060 AMP is a compact card for sure. Its size makes the Zotac 2060 AMP the ideal card for small form factor builds. Zotac advertises that the 2060 AMP will fit into 99% of cases, and I fully believe it. With its neutral colors of black, gray and silver, the 2060 AMP can easily fit into any build that has a specific color scheme in mind. The back plate looks great and I love that it wraps around the rear of the card This gives the PCB and the heat sink 360° of protection. It also adds to the already great look of the card. Although RGB lighting has started to grow on me, I still prefer non-RGB lighting. So, the fact the Zotac 2060 AMP has only a white LED may be a negative for some, its a huge plus for me. Again, this goes well with the neutral color scheme of the Zotac RTX 2060 AMP.

The performance of the Zotac RTX 2060 AMP was great and far exceeded my personal expectations. Where its considered a budget or mid-ranged card, I had expected it to perform as a solid card for 1080p gaming, on high to very high settings. With the exception of Battlefield V, I tested all games on their highest presets. The Zotac 2060 AMP destroyed all games at 1080p and turned out to be a solid card for 1440p gaming, even with games at their highest presets. If you’re ok with gaming at 30 frames per second, the 2060 AMP could even handle light 4k gaming. However, if you’re anything like me, you’d prefer higher frame rates at lower resolutions.

Want to see more about ZOTAC Products we have reviewed