The 1 TB ADATA SU750 we tested for this review was originally installed on our standard test bench which has an I7 8700k for the processor. However, In the process of this review, there was an unfortunate incident in which this specific test bench lost the board, pump, and processor due to a power surge. At the time, the Microcenter near me did not have the 8700k in stock. So for this review, the I7 9700k was used. For this review, the ADATA SU750 was labeled as drive E for this review. The benchmarks we use for storage reviews were run twice. The first time with an empty drive, the second with the drive at about 75% capacity. Each benchmark was run a total of three times and we went with the best overall results for each benchmark. The benchmarks used in this review are as follows.

AS SSD Benchmark is a simple and portable utility which helps you measure the effectiveness and performance of any solid-state (SSD) drives connected to your system. It will test “Seq”, “4K”, “4K-64Thrd” and Access Time. In the end, it will give your SSD a score. 4K tests the read/write abilities by access random 4K blocks while the Sequential test measures how fast the drive can read a 1GB file.

The ATTO Disk Benchmark utility was designed to measure regular disk drive performance.  However, its more than capable of measuring both USB flash drive and SSD speeds as well. The utility measures disk performance rates for various sizes of files and displays the results in a bar chart showing read and write speeds at each file size. The results are displayed in megabytes per second. 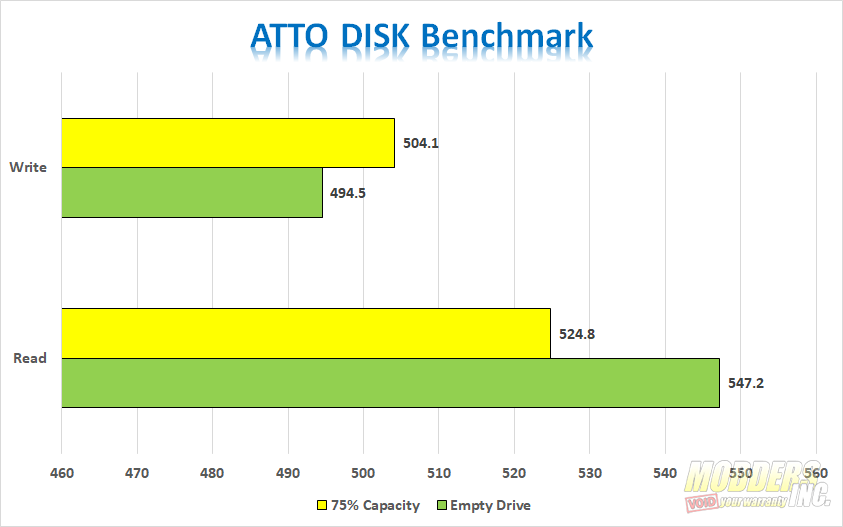 “CrystalDiskMark is designed to quickly test the performance of your hard drives. Currently, the program allows users to measure sequential and random read/write speeds.” 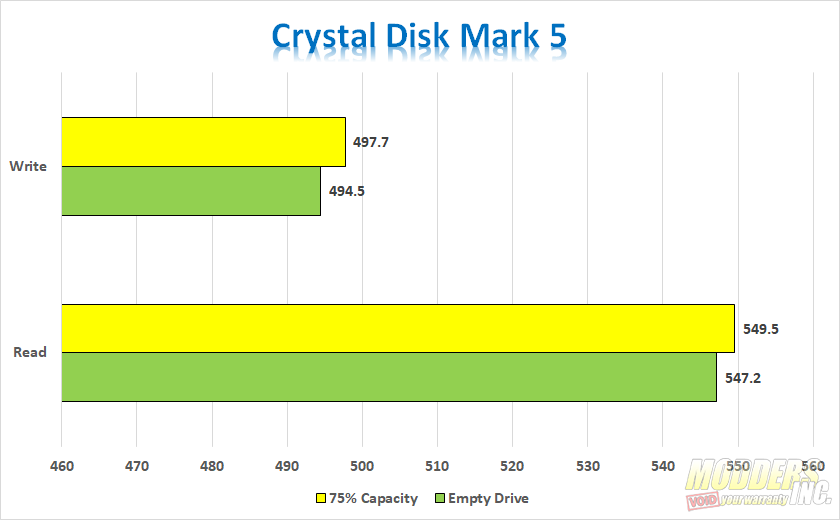 Crystal Disk Mark 5 followed the same pattern as Anvil and AS SSD with the drive performing better at 75% capacity. On the read speeds, the SU750 achieved a speed of 547.2 MB/s with an empty drive and 549.5 MB/s with the drive at 75% capacity. Crystal Disk Mark 5 showed us the best read speeds for the ADATA SU750 on the four benchmarks we ran. The write speeds were also close, but slightly slower than on the ATTO Disk Benchmark. With an empty drive, out SU750 achieved a write speed of 494.5 MB/s and with the SU750 at 75% capacity, a speed of 497.7 MB/s. 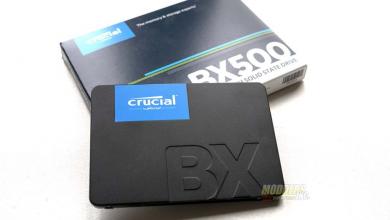