Noctua’s NH-D14 and NH-D15 dual-tower coolers are excellent CPU coolers because of their size but many overlook the fact that part of their effectiveness also lies in their design. As a dual-tower solution, the NH-D14 and NH-D15 have the convenience of further spaced-apart heatpipes compared to a single tower heatsink where they bunch up closer together. This means heat is a lot less concentrated on a specific area and should be easier for the fan to push out. Would the same design idea work on a smaller heatsink?

Noctua’s NH-U9B has been around since 2008 and Noctua has updated it with the release of a RAM-friendly NH-U9S, but they are also releasing a compact dual-tower 92mm heatsink dubbed the NH-D9L. The Noctua NH-D9L is basically a mini-NH-D15 using four heatpipes distributed across a pair of aluminum fin arrays. As with all Noctua coolers, the NH-D9L is premium nickel finished and comes with mounting accessories for AMD, Intel LGA2011 and Intel LGA115x motherboards.

The Noctua NH-D9L is packaged in a glossy outer box has a wall of multi-lingual text on all sides. Unlike the previous generation NH-U9B SE2 packaging, the NH-D9L has no see through window or even a photo preview of what the internal cooler looks like except for a small diagram of the cooler dimensions on the corner side of the box. I guess Noctua is confident that their branding is familiar and so distinct that they don’t need to have a flashy graphical packaging to sell like other coolers. The packaging inside is separated into two compartments: one for accessories and one for the NH-D9L itself. The NH-D9L is sandwiched between two folded cardboard cube pieces a la the original NH-D14 packaging. The mounting kit is closer to the NH-D15 than what was found on the NH-U9S previously reviewed here. Most notably are the Intel NM-IMB2 mounting bars with a more prominent curve and the use of the classic NM-AMB1 mounting for the AMD. 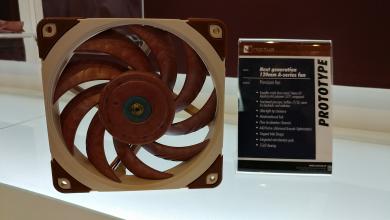