When I buy hardware or peripherals, I tend to look for plug and play products. It seems most things these days come with not just drivers, but also software. The Sound BlasterX G6 can be used as plug and play. However, it is also supported by one of the better pieces of software I’ve used recently. The Sound Blaster Connect software allows you completely customize your audio experience, in more ways than one. 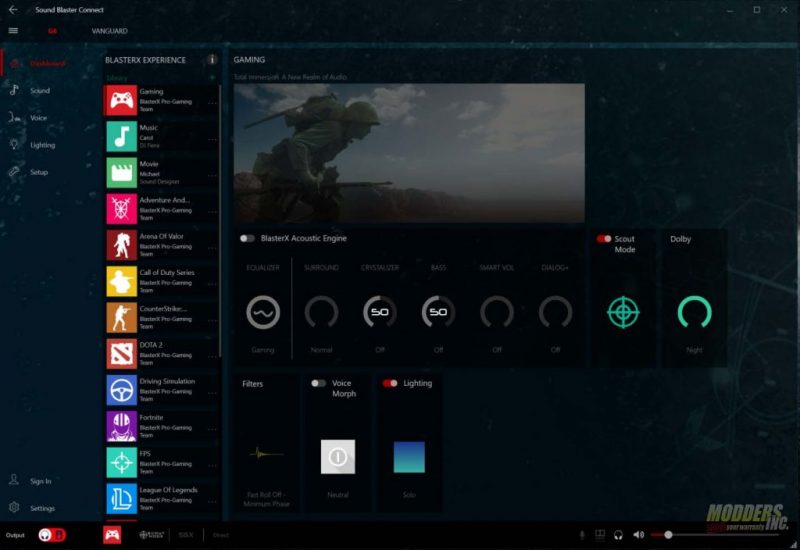 When you first open the Sound Blaster Connect software, you’ll start on your Dashboard. Here, you can turn on and off the different feature of the Sound Blaster G6. These features include the BlasterX Acoustic Engine, Scout Mode, Dolby Digital Surround Sound, Filters, Voice Morph and the lighting. There also 18 preset profiles for listening experiences such as gaming, movies and music. There are also several presets for different games such as Call of Duty, Fortnite and many more. A full list of preset profiles is listed below;

The next section under the Dashboard is the Sound section. You can also customize your listening experience using the Sound Blaster Acoustic Engine. There are 5 customization options in the Acoustic Engine. The first is the surround option. This allows you to set how wide you surround sound is. The range is from normal to ultra wide. Next is the Crystalizer which has a range from zero to 100. Next option is the Bass, also with a range of zero to 100. Both the Crystalizer and Bass have toggle switches as well. Nest is the Smart Volume option and last is the Dialog + option. Smart volume intelligently minimizes abrupt volume changes by adjusting the loudness of your audio play back automatically. The Dialog Plus option enhances voice is both music and movies for a clearer vocal range. 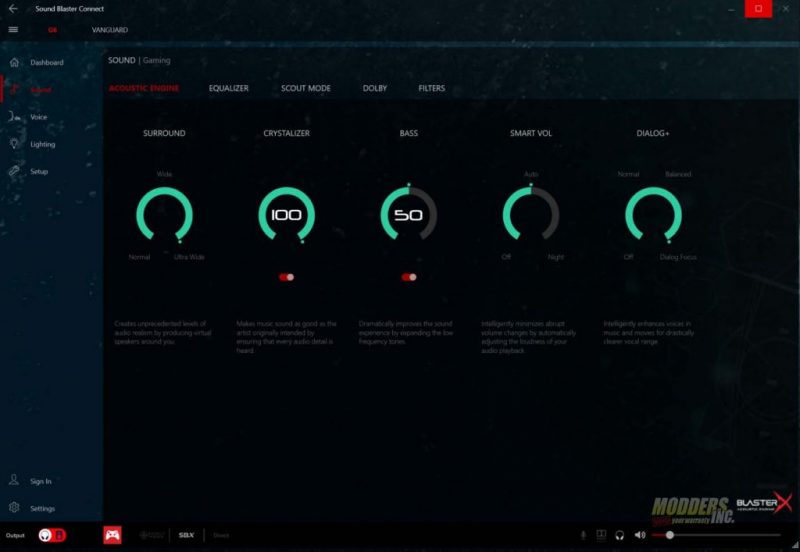 Next is the Equalizer where you can customize your listening experience on each of the profiles on the dashboard. There are sliders on the bottom of the equalizer for both bass and treble. The equalizer allows you to adjust a range of different frequencies. Simply use the mouse to either click on different spots through the range of frequencies, or draw a line for the sound to hit different frequencies. As you listen, you can simply click on any given spot and slide up or down to adjust that frequency. 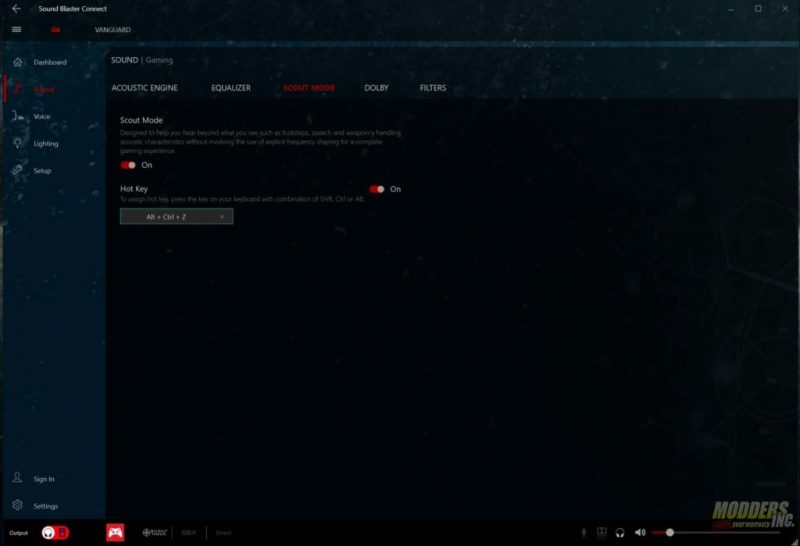 Scout mode is the next section in the Sound Blaster Connect software. It is also one of my favorite features of any Sound Blaster sound card I’ve used over the last couple years. Say you’re playing any first-person shooter. With Scout Mode enabled, you’re able to hear the foot steps of your enemies, from the direction they are coming from. The closer they get the louder they get. There is also a companion app for IOS and Android call the Scout Radar. This will show your enemies as a blip on the radar right on your phone or tablet. Now if they could make that for in-laws. 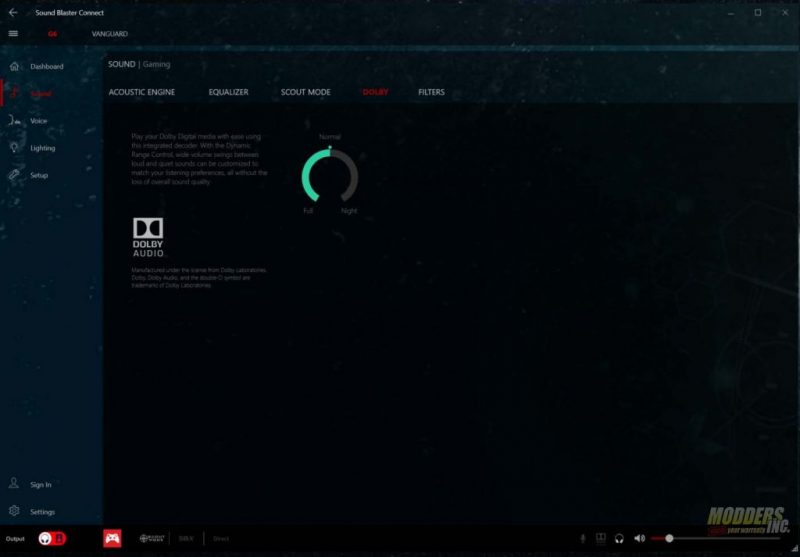 The next menu under the sound option is the Dolby section. The Sound BlasterX G6, unlike the G5, has Dolby Digital Surround Sound. In this section, you can set the surround sound to Full, Normal, or Night modes. Its also a slider, so you can make small adjustments in between each setting. 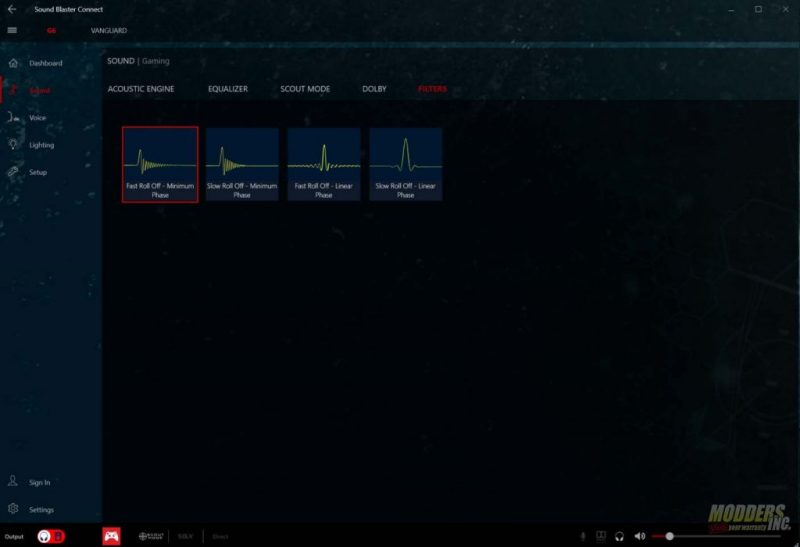 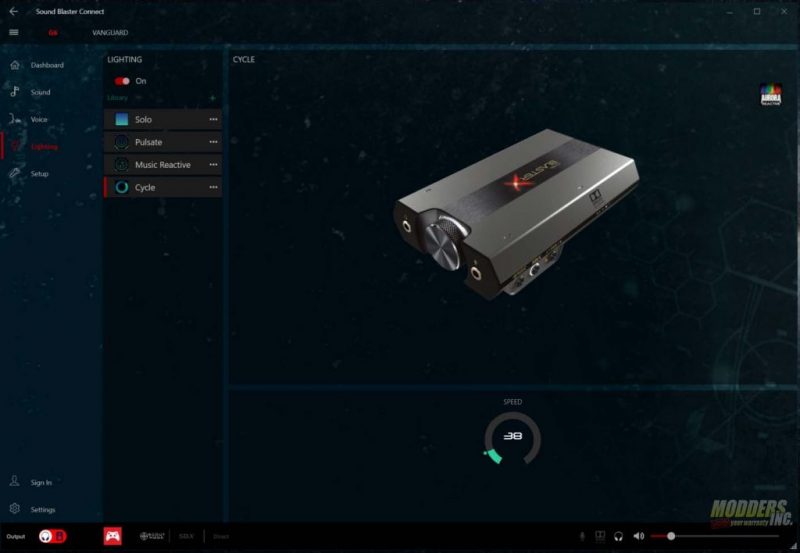 The Sound BlasterX G6 added RGB Lighting, something the G5 didn’t have. Just the X on the top of the sound card has RGB lighting, Its subtle, but looks good. The Lighting menu allows you to set different profiles to the lighting, There are Solo, which is simply a static color. The other three are Pulsate, Music Reactive and Cycle. This does not change the lighting behind the knob.

The last section on the main menu is the Setup section. Here you can configure the output mode to either direct or to have some kind of effect, You can set your head phones to stereo mode, 5.1 or 7.1 virtual surround sound. In the Setup, you can also adjust the levels of the different input and outputs of the Sound BlasterX G6. The Sound Blaster Connect software also allows you to set up different kinds of speakers that you may connect through the Sound Blaster G6. You can set the different levels for the mic volume and mic monitoring volume. There is also a voice morph feature that is fun to mess around with. Overall, there are a ton of customization options in the Sound Blaster Connect Software.