To test the Sound BlasterX G6, we ran the Right Mark Audio Analyzer. This is the program we use to test the on-board audio in our motherboard review. We compared The G6 to not only the G5 but also to the onboard audio on the Z390 Aorus Pro. RightMark will give you an idea of how the audio compares on paper. To test with Rightmark, you must first plug into both the rear headphone jack and the rear mic jack using a double-ended 3.5 mm jack cable. This creates an audio loop to test the internal audio performance of the onboard audio. 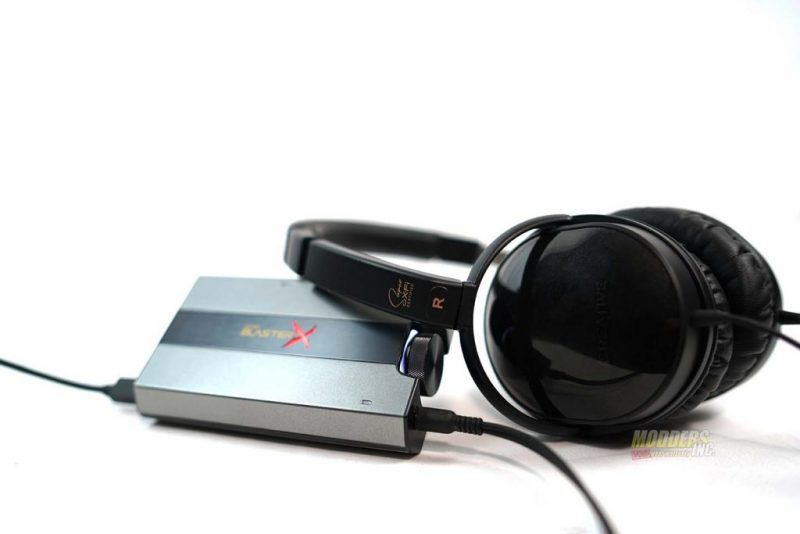 The Sound BlasterX G6 is compatible with your PC, PS4. XBOX ONE and Nintendo Switch. However, there are other, more unique ways the G6 can be used. Personally, my favorite way to use the Sound BlasterX G6 is an amplifier for my cell phone. It just requires a USB pot and two 3.5 mm auxiliary cables. Or one aux cable and a pair of head phones. You can power the G6 using the USB port in my Jeep. Then, run one aux cable to the aux port in the car and the other to the cell phone. This gave me countless hours of use with the G6. A couple hours a day for weeks. I listened to podcasts, books and music of all kinds. You can also run the G6 off of a power bank. There aren’t too many situations I could see this being necessary, but it is possible. Maybe being on the beach all day?

For the most part,audio reviews are very subjective. We can run all the audio benchmarks we want, but what sounds good to me, may not sound good to you. For all of my audio reviews, I have a set sampling of music and movies I used while testing headphones, earbuds, sound cards and the like. The games I play do vary since as new games come out, there are better games for testing audio. Generally, its first or third person shooters I use to test audio though.  I always listen to the Eagles Hotel California. Reason for picking this song is it’s the song I listened to on Sennheiser’s $55,000 Orpheus headphones at CES a few years ago. However, I do listen to a wide array of music, and my testing reflects that. I always test any audio hardware with rap songs with excessive amounts of bass, This is to see if there will be any distortion on either the headphones or sepakers I’m using at the time of the review. Most recently, I’ve also added a 7.1 surround sound test as well. The test includes several different clips and does a great job testing surround sound system. You can test it out here: https://youtu.be/Jb4GolexHac

For the last several years now, I’ve used the Fnatic Duel gaming headset on my PC. It’s an amazing headset and completely modular. Its private label for Fnatic and made by AIAIAI and part of their TMA-2s ecosystem. It is hands down, the best gaming headset I’ve ever used. However, with it modular, I have it set u p as a pair of headphones, with no in-line or boom mic attached. I’d dare to say they may be one of the best pairs of headphones I’ve ever owned. I even chose the Duel over my Sennheiser headphones for several reasons. The fact the Duel can be customized is a great feature, they are very comfortable and if you can believe it, sound better than the Sennheisers I was using, the HD 598 special edition.

When testing the Rightmark Audio analyzer to test the quality of the sound put out by the Sound Blaster G6. There are 8-bit, 16-bit and 24-bit tests with in Rightmark. Generally, we run the 16 and 24-bit tests in a motherboard review For the G5, we did the same. However, for the G6, we included a 32-bit test as well.

For both the G6 and G5, we did both 16 and 24-bit testing on all frequencies. These frequencies are 44.1 Hz, 48 Hz, 88 Hz, 96 Hz, 176 Hz, 192 Hz, 352 Hz and 384 Hz. We also added results from the Z390 Pro review, just to compare the external sound cards to on-board audio. It was no surprise the both the G5 and G6 did better than the on-board audio. What was a surprise to me was how much better the G6 was than the G5 in our Rightmark testing, especially on the 24-bit testing. On the first 16-bit test, the G5 was slightly above the G6. So, I had expected this to continue throughout testing. However, after that, the G6 began to inch its way further and further ahead of the G5. On the 24-bit testing, the G6 steadily beat out the G5 on all frequencies.

Where I was really surprised by the Sound BlasterX G6 was in the subjective testing. I honestly didn’t expect the slight increase in specifications from the G5 would make that much of a difference. I did all my basic testing I do on all audio products, with a couple of additions. I watched the same movies with both the G5 and G6, I listened to the same songs, even played some of the same games. But since the review of the G5 was published, the G5 had lived in my car and was used as an in-line amp for my cell phone, the Lg Q7+. It’s not the best phone, but it has decent sound quality and a built-in amplifier. Since this is where most of my experience with the G5 was, I used the Sound BlasterX G6 in the same way, in my car. The G6 has essentially been with me at all times since receiving it a couple of months ago.

I always watch the same movie when testing audio. That movie is Black Hawk Down. It’s great for testing both 5.1 and 7.1 surround sound. It also won the Oscar for best sound mixing in 2002. As for games, or games, I play a mix of several different games. This time around was Assassins Creed Odyssey, Far Cry 5, GTA V and Battlefield V. The Sound Blaster G6 works great for gaming. Especially with Scout Mode enabled in a competitive shooter like Battlefield V or a stealth game like Assassins Creed Odyssey. The benefit of hearing footsteps from the direction they’re coming in is a great advantage to have. The last place I tested the Sound BlasterX G6 is in my car, as an in-line amp for my cell phone, connected through the auxiliary port.I listened to everything from movies and TV shows to music and podcasts. I used the Sound Blaster G6 in my car to and from work everyday, 4 or 5 days a week. My car had Infinity speakers, so they already sound good. The G5 made them sound even better. However, the G6 makes my car sound like it has sub woofers in the trunk. Sub woofers with zero distortion. I do know the G6 is compatible with the Xbox One, PS4 and Nintendo Switch. However, I own none of these, so I couldn’t test it personally.