CPU Queen is an integer benchmark that tests branch prediction and misprediction penalties. CPU PhotoWorxx tests the SIMD integer arithmetic execution units of the CPU and the memory subsystem. CPU ZLib is a compression benchmark that tests the combined CPU and memory performance. CPU AES is a multi-core encryption benchmark that uses Advanced Encryption Standard data encryption. CPU Hash is an integer benchmark that measures performance using the SHA1 hashing algorithm. FPU Julia measures single precision FP, FPU Mandel measures double precision FP, FPU Sin Julia measures extended precision FP while FPU VP8 is a video compression test utilizing the FPU Julia fractal module. On both the AIDA64 CPU and FPU testing, our 8700k had nearly identical scores on both the Z390 Pro and Z390 Phantom gaming SLI/ac. The 8700k did better in some cases on the Phantom Gaming SLI/ac and in others on the Z390 Pro. For example, in CPU Queen, the Z390 Phantom Gaming scored 72254 to the 72016 on the Z390 Pro. Then on CPU HASH, the Z390 Pro did better with a score of 7382 to the 7376 on the Phantom Gaming SLI/ac.

Based on MAXON’s award-winning animation software Cinema 4D, CINEBENCH is a real-world cross platform test suite that evaluates your computer’s performance capabilities. It has both the single thread and full performance test for your CPU, as well as an Open-GL test for your GPU. Cinebench R15 is one of the most widely used benchmarks used to test the performance. It puts the CPU under 100% load, but only for a very short time. It gives a good baseline for your CPU. However, I wouldn’t use it for testing the stability of an overclock.  Although our m8700k hit 4.8 GHz on both motherboards, it achieved higher Cinebench scores all around on the Z390 Pro. On the Phantom Gaming SLI/ac, out 8700k hit 1338 CB at stock to the 1365 CB on the Z390 Pro. While overclocked, our 8700k hit 1461 CB on the Phantom Gaming SLI/ac to the 1553 CB on the Z390 Pro.

PCMARK 10 is the successor to PCMark 8 and the latest complete system benchmark from UL, formerly Futuremark. In their own words “PCMark 10 features a comprehensive set of tests that cover the wide variety of tasks performed in the modern workplace. With express, extended, and custom run options to suit your needs, PCMark 10 is the complete PC benchmark for the modern office.” We ran the complete PCMark 10 benchmark. In 8 out of the 11 tests in PCMark 10, the Phantom Gaming SLI/ac came out ahead of the Aorus Z390 Pro. In the Productivity, Video and Spreadsheet tests, the Aorus Z390 Pro beat out the Z390 Phantom Gaming SLI/ac. 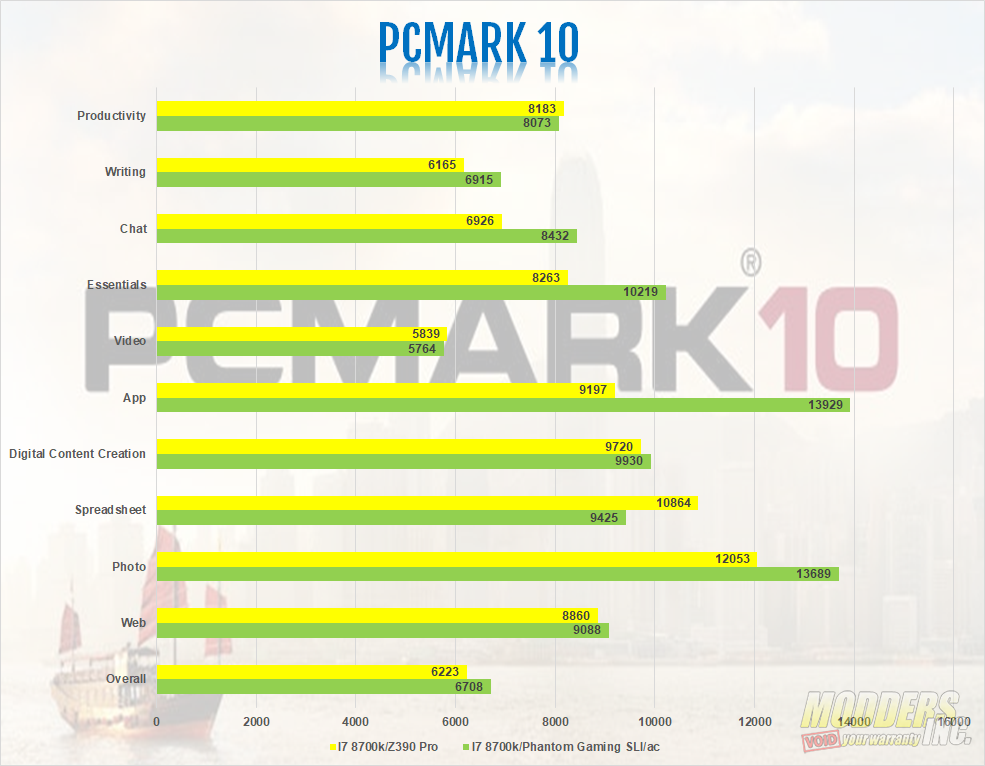