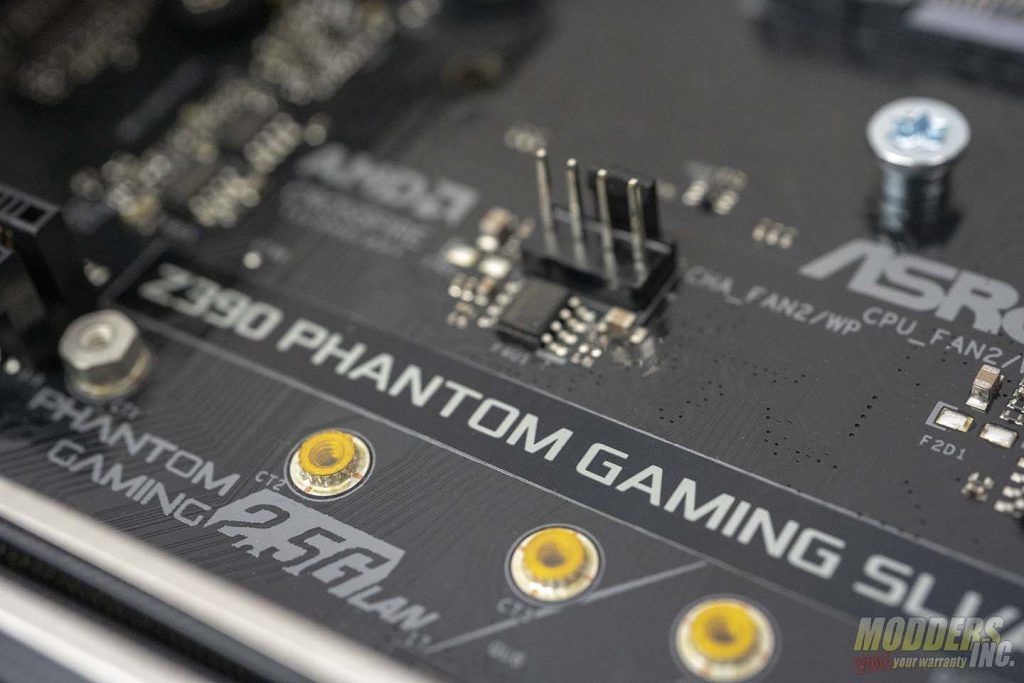 The GPU used in this review was the MSI Gaming X 2080 ti. For gaming, we tested three games out of our normal suite of games used for GPU reviews. However, games were only tested at 1080p. This puts less of a strain on the GPU, allowing the CPU to do more of the work. Both 1440p and 4k puts more of a strain on the GPU as opposed to the CPU. The games were benchmarked at the highest presets.  The three games we tested for this review were Far Cry 5, The Witcher 3and Shadow of the Tomb Raider. Each benchmark was run three times. We then averaged out the minimum, maximum and average frames per second. The results in the chart are the average of the three runs.

Far Cry 5 is the latest is the far cry series. It takes place in the fictional Hope County Montana. You play the role of the un-names deputy who’s sent to arrest Joseph Seed, the leader of the dangerous Edens Gate Cult. However, things do not go as planned and you spend the game trapped in Hope County attempting to take out Joseph and the rest of his family as they attempt to take over the entire county. Far Cry 5 was released in 2018. Ubisoft has developed a beautiful open world with amazing visuals. However, the game is very demanding on even the most powerful systems. This game was tested with the in-game benchmark, as well as near the beginning of the game when you first leave the bunker owned by Dutch as you attempt to clear his island of cult members. 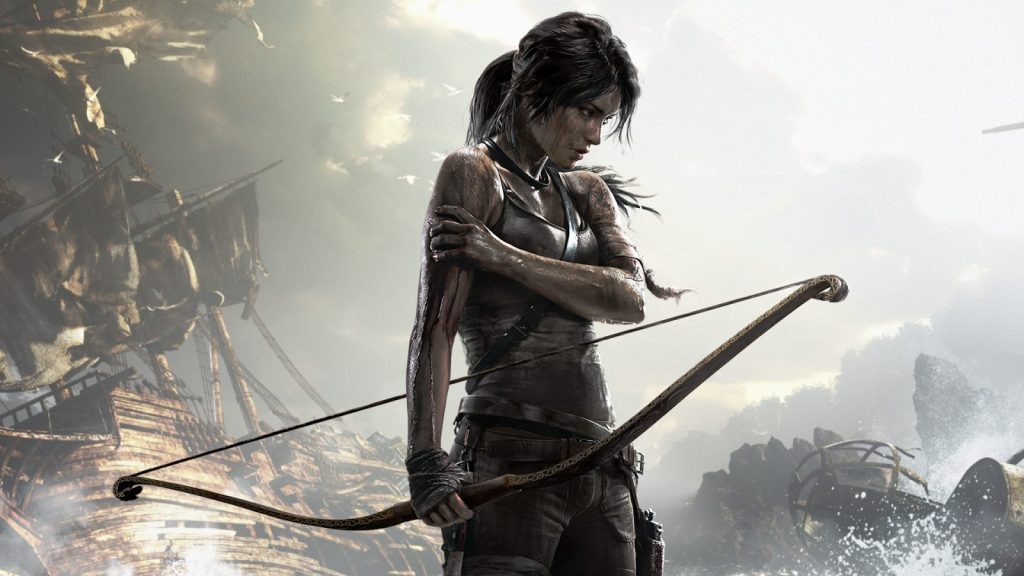 Shadow of the Tomb Raider is set to be the third and final game of the rebooted trilogy developed by Eidos Montréal in conjunction with Crystal Dynamics and published by Square Enix. In Shadow of the Tomb Raider, you continue your journey as Lara Croft as she attempts to finish the life work of her father. Her in a journey that takes her from Central America to the hidden city of Paititi as she attempts to stop Trinity in their attempt to gain power. Section benchmarked was near the beginning of the first section that takes place in the hidden city. This was compared to the in-game benchmark which seems to be an accurate representation of the gameplay. 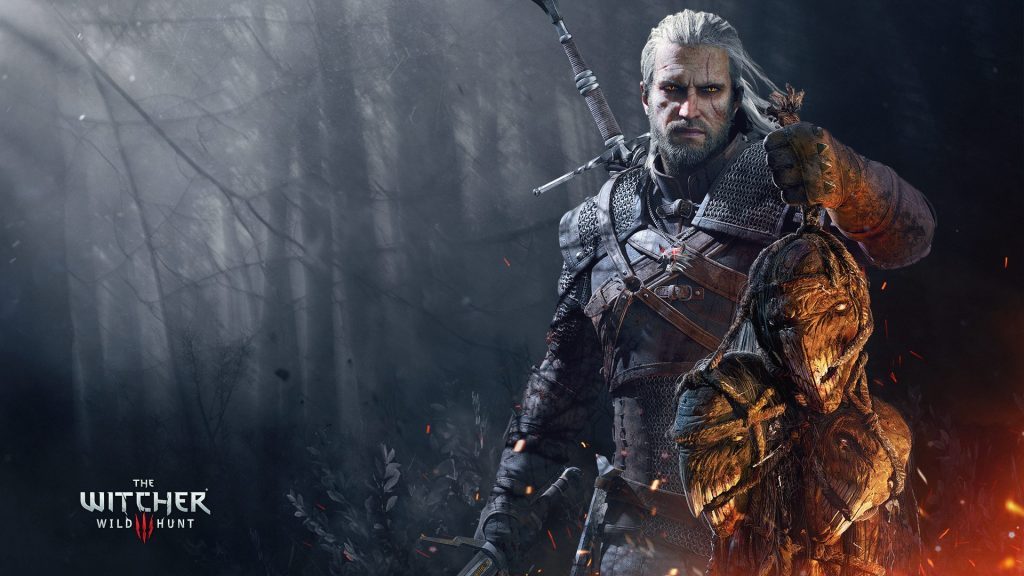 The Witcher 3 is an action role-playing game developed and published by CD Projekt. Based on The Witcher series of fantasy novels by Polish author Andrzej Sapkowski. This is the third game in the Witcher Series to date and the best so far. You play as Geralt of Rivia on his quest to save his adopted daughter from the Wild Hunt. At its release in 2015, The Witcher 3 has some of the most beautiful graphics ever seen in a game, as well as some of the most demanding. Even today, almost 4 years later, the Witcher 3 still holds up very well and brings even the most powerful systems to their knees. The game was benchmarked during the hunt for and battle with the Griffin near the start of the main story. 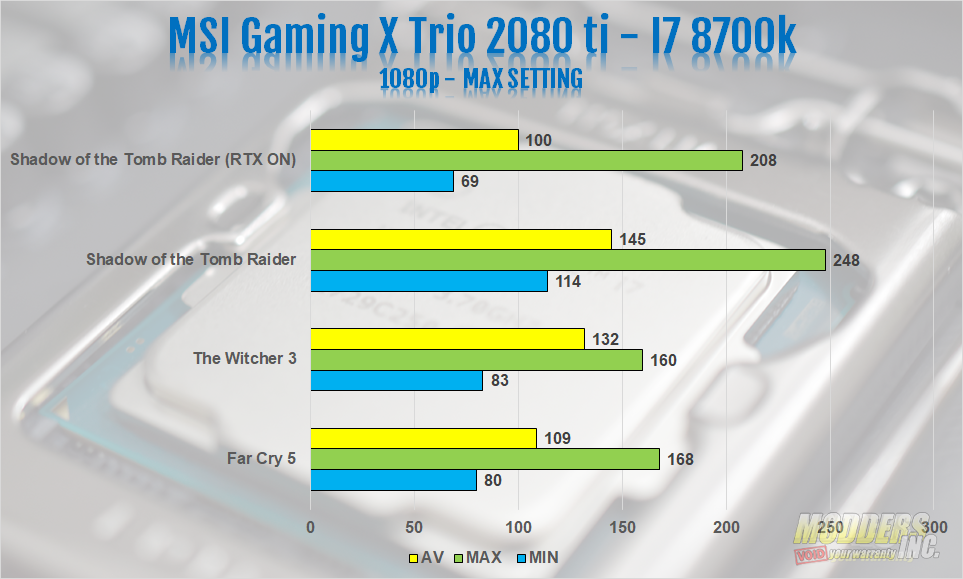 It goes without saying that the MSI Gaming X 2080 TI is a bit overkill for 1080p gaming. With that, our results look a bit absurd. But as we said early, we’re more trying to stress the CPU rather than the GPU. All three games were tested at their highest presets and all three averaged 100 frames per second or better. Even with DXR enabled and set to ultra, Shadow of the Tomb Raider averaged 100 FPS. With DXR disabled, Shadow of the Tomb Raider averaged 145 FPS. Next was the Witcher 3. Even with the games being over 4 years old now, The Witcher 3 still has some of the best graphics out there and puts a strain on most systems. The Witcher 3 averaged  132 FPS. Last was Far Cry 5 with an average of 109 FPS.